Share All sharing options for: Diamondbacks 6, Reds 2: Better Than A Sexy Bull Durham

After a game filled with some usual D-Backs frustration and unusual D-Backs sensation we can all rejoice and dance and ring in the new, hail Bronson Arroyo! The boys break out of a small five game funk with an amazing performance by Dan Haren and quality at-bats by Montero and Reynolds. We started the game with some mistakes on the basepaths and ended with some sputtering of the bullpen, but we still got the win. Let's take a closer look:

Just before the game began I thought to myself, "This is the day that they finally get the best of a struggling pitcher." Surely enough, my thoughts were converted into reality as the boys managed to get a runner into scoring position on seven different innings. Bronson Arroyo was constantly working from the stretch and was already in trouble by the bottom of the second inning. Unfortunately, he managed to slip away as the D-Backs committed one of "those" plays as Chris Young was out by twenty feet as he approached home plate. He leisurely walked into the out rather than attempting to make a play out of it. A pretty good example as to why he shouldn't be on the field if he isn't healthy.

After Haren rolled through the top of the third inning he lead off the bottom with a graceful double. The success continued as he advanced to third on a Felipe Lopez groundout and we suddenly felt that weird feeling again. You know, that strange grumble in your stomach when we're about to score but you just know that they're going to screw it up somehow? Zing! Stephen Drew grounded into a fielder's choice and Dan Haren was thrown out at the plate. That's back-to-back innings where we were thrown out at the plate. Justin Upton then decided to do something very few Diamondbacks have been able to accomplish this year. He extended the inning with a two-out single and quickly moved to second on a Brandon Phillips error. With runners at second and third, Mark Reynolds finally brought the first runs to the plate with a single and later reached home himself on a Gerardo Parra single.

With a comfortable lead, Haren continued to solidify his status as the All-Star game starter. He held the Reds hitless for 4 2/3 innings and only gave up four hits through seven. He struck out nine, lowered his ERA to 2.19, and dropped his WHIP to 0.81. There's a strong chance that he'll contend Pedro Martinez's single-season record of 0.73. The Diamondbacks cruised throughout that span, scoring three times compliments of back-to-back homeruns by Montero and Haren. That's right, I said Haren. In addition to his great outing he also managed to go 2-2 at the plate with a double, a sacrifice bunt, and his first career homerun. He's batting .286 now. Forget the Cy Young we're talking MVP!

The bullpen hit a brick wall in the eighth as Tony Peña, Scott Schoeneweis, and Jon Rauch were all needed to close it out. After Cincinnati loaded the bases, Rauch was able to hold the Reds to only one run on a sacrifice fly. He overcame some borderline calls to finally record the last out, putting a dagger into the hearts of many Reds fans. Qualls jumped in for the ninth and had a clean 1-2-3 inning to end the game. Hopefully we can look forward to more 1-2-3 closeouts by CQ.

Four Diamondbacks recorded a multi-hit game today: Reynolds and Montero had three hits, and Upton and Haren each had a pair. We walked five times, all by the hitless Tony Clark and Chris Young (only one walk scored) and struck out seven times. Stephen Drew was the lone hole in today's game as he was 0-5. 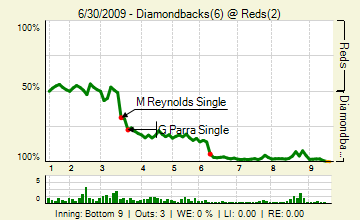