Diamondbacks 3, Padres 6: Hinch is (not quite) outta there!

Share All sharing options for: Diamondbacks 3, Padres 6: Hinch is (not quite) outta there!

No need to worry about the bullpen blowing this one: Jon Garland and Eric Byrnes combined to put it largely out of the team's reach before the relief corps got into the game. Garland gave out six free passes in his outing, on five walks and a hit batter - four of them came around to score. And Byrnes whiffed on a fly-ball to left-center, that he seemed to have a perfectly good bead on, and just didn't put in his glove. It became a two-run double that took a one-run lead for San Diego and turned it into three, with only six outs left for Arizona.

Yeah, losing against Peavy is about business as usual for most other teams over the course of the years. But it's kinda disappointing when you beat yourselves, rather than making the opposition do it - and that's exactly what Arizona did. We couldn't do anything right: our manager couldn't even get thrown out of the game. AJ Hinch went out to argue the call after Augie Ojeda was given out on a bunt-single attempt, when Adrian Gonzalez lunged at a diving Augie with the tag. While replays showed the call was probably good, Hinch gave it the full effort - however, he didn't say any of the magic words, and first-base umpire Paul Nauert wouldn't give him the heave-ho.

That was probably the most entertaining aspect of the game, though the Diamondbacks did take the lead in the top of the fourth, on singles by Chris Snyder and Josh Whitesell, each of which resulted in a run. After the Padres had come back with a four-run fifth, the Diamondbacks got it back to a one-run game, thanks to a broken-bat infield hit from Byrnes in the sixth. However, it was the end of the scoring for us: we made it somewhat interesting in the ninth, getting the tying run to the plate with one out. But pinch-hitter Mark Reynolds struck out on a high fastball, and Felipe Lopez grounded out.

Josh Whitesell led the offense with two hits and a walk: his second run at the majors has proved to be a good deal more successful than the first time around. His line since coming up again on May 30th has been a thoroughly respectable .294/.429/.471 - sure, while it's a small sample size, it's not all that much less than his first stint. The bad news for Whitesell is, Tony Clark could begin a minor-league rehab assignment for his hand next week. However, as Clark has been out of action for more than a month, Hinch said the stint could be longer than usual. No hurry, Tony. Gerardo Parra had two hits, Snyder a hit and a walk, and Stephen Drew extended his hitting streak to 12 games.

Garland struggled from the get-go, loading the bases with one out in the first. However, he escaped that jam, and then settled down, facing the minimum number of Padres over the next three innings. But things unraveled for Garland in the fifth, starting with a leadoff walk to the .188 hitting San Diego catcher, and a bloop by Josh Wilson to left-center [on which Byrnes could probably have got a better jump] didn't help. After a bunt by Peavy, a single and sacrifice fly wiped out the lead, and it took Garland four attempts to get the final out, including hitting the sub-Uecker hitting Brian Giles with a pitch. He then walked Adrian Gonzalez to get to Kouzmanoff, who took offense and delivered a two-run single.

Garland did pitch into the seventh, and deserves credit for saving the bullpen - the Padres also hit some good pitches, such as the one to Kouzmanoff. But the end result is six earned runs and another loss: he can't blame Chase Field or the roof for this one. The ball missed by Byrnes marked the end of his night; in fairness to Eric, while it would have been a good play (and he made a harder one to end the fourth inning), it's definitely one you expect a major-league player to make. Daniel Schlereth came in and showcased how good he can be. He retired all four batters faced, including striking out the Padres in the eighth. 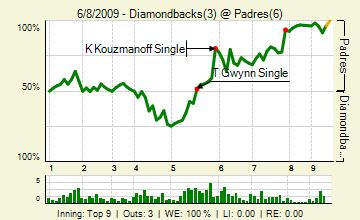 683 comments, which is a lot more than it seemed at the time. DbacksSkins out-slugged dima1109, 201-173, and that accounted for the bulk of things, but also present were Muu, kishi, snakecharmer, PioneerSkies, TwinnerA, pygalgia, pierzynskirules, hotclaws, 4 Corners Fan, katers, Scrbl, jonny-yuma and soco, though things got a lot quieter after the Padres took a lead, and definitely petered out after they extended the lead to three runs.

The loss, coupled with a victory by the Rockies, sends Arizona back to the cellar in the NL West, and the road-trip ends as 3-4. Normally, that wouldn't be too bad - I can't help feeling that it should have been 5-2 or possibly even better than that. It's back to Phoenix for the Diamondbacks, and the Giants come to town tomorrow for a three-game series. Fortunately, we don't have to face Lincecum or Johnson, though they don't have to face Dan Haren either. Wednesday in particular should be fun, with the two best six-game losers in the National League, in the shape of Doug Davis and Barry Zito, facing each other.

However, next up for us will be the draft, which starts tomorrow afternoon at 3pm, Arizona time. Join us here for that, and we'll get our first glimpse at the next wave of the Diamondbacks future, 2009 style.