I'm doing the rest of this one after the jump, for reasons which should be pretty obvious. :-)

Wow. Simply: wow. The Diamondbacks managed almost to snatch defeat from the jaws of victory, allowing the Padres to tie things up by allowing five runs in the ninth to make the score tied at six. However, the bullpen which had been so wretched, then blanked the Padres - the B-members of our relief corps no-hitting San Diego for a complete game after that point. And Mark Reynolds hit a three-run homer off utility infielder and desperation pitcher Josh Wilson, to give Arizona a victory which should really have been a great deal easier.

To start at what looked like the end (even if it turned out to be the middle), this has to be the most spectacular melt-down in Diamondbacks history - the bullpen allowed five runs in the ninth inning, wiping out a lead and a Win Probability estimated at 99.3%. Juan Gutierrez started things off, with a double, an RBI single and a walk - he then got a very, very long fly-out to the warning-track in center. Enter Chad Qualls, who allowed an infield RBI single and then got Chris Burke to ground out - unfortunately, just not hard enough for us to turn the double-play. Still, David Eckstein was up: he'd only hit seven homers in the previous three seasons combined, covering over 1,400 at-bats. So it's not as it he was going to hit a three-run homer, was he?

Of course, that's exactly what he did, just long enough and just fair enough, down the left-field line - the resulting noise meant that some of the Padres fans at Petco actually woke up as a result. It's got to the stage where I doubt any D-backs fan watching the game was surprised. Innings like this have happened so often of late against the bullpen, it seems, that all I felt was a sense of mild surprise that Eckstein going yard was the cause. It's the sixth time this year Arizona have allowed five or more runs, in the sixth inning or later of a game.

Dan Haren was the latest starting pitcher to see victory frittered away by the bullpen. The rotation has been remarkable on this road trip, there's no other word for it. In those six starts, they have an ERA of 0.73, having allowed just three runs in thirty-seven innings of work, giving up a mere twenty hits. However, this stellar run of performances have been rewarded with wins only twice in six games. Here's the summary:

Through the front eight, of course, this looked a completely different game, with Dan Haren entirely in control, despite not really appearing to have his best stuff. He allowed a one-out double to Edgar Gonzalez in the first, but after the walk to Adrian Gonzalez which followed immediately, then faced one batter over the minimum until Kevin Kouzmanoff broke up the shutout on a solo homer, with two down in the seventh. In his eight losses and no-decisions, Haren's ERA is now 2.89, with the overall season number down to 2.33. We did get lucky in the eighth, when Tony Gwynn tried to steal third as the batter was walked by Tony Peña: we gratefully accepted that out.

I have to say, outside of that ninth inning, the bullpen were great [ok, that's got to be up there with, "Apart from that, Mrs. Lincoln, how did you like the play?"] Jon Rauch pitched a rare for him, clean inning; Esmerling Vasquez followed with two perfect frames and then Clay Zavada had 2.2 hitless innings, though walked three and ended up having to be replaced by Leo Rosales in the 15th. He got the final out and followed with a trio of 1-2-3 innings, meaning that largely-unheralded quartet managed to combine for nine innings of no-hit relief. This underscores that the issue with our bullpen is as much their reliability and consistency, as their actual level of performance. Overall, the final line of five runs in eleven innings of work is not too bad.

The offense had their moments too, most notable a four-run fifth inning, where two walks around a double by Miguel Montero loaded the bases without anyone being retired, and Josh Whitesell then unclogged them with a double of his own. He was then bunted over to third and came home on a sacrifice fly. The same scenario - bases loaded with no-one out - was repeated the following inning, and led to a couple more runs, courtesy of a Montero sacrifice fly, and a single from Chris Young. However, that would be it for the Diamondbacks, as the Padres bullpen posted nine consecutive zeros on us.

There were also some failures on the "fundamental baseball" front by Arizona. In the first, Mark Reynolds was picked off first-base and Miguel Montero was then out over-sliding the bag at second. In the third inning, Chris Young was picked off first too. When the Diamondbacks had a chance to do something in the 12th, after a Parra lead-off double, Ryan Roberts bunted straight back to the pitcher for the old 1-5 out. And in the 15th, Clay Zavada was sent up to hit for himself with men on the corners and one out, and ordered to bunt - he got it down, but it seemed like giving the Padres a free out [we had no bench players left by that stage, not helped by Upton having to leave the game with an aggravated left shoulder].

Finally, in the eighteenth, the Padres ran out of pitchers - they'd already got two innings from Friday's starter Chad Gaudin. Hence, they turned to Josh Wilson, who'd done this before with Arizona, coming in and throwing a scoreless inning in a blowout. This afternoon evening, however, the game was on the line, and though he had decent velocity, didn't have great control. He did come within one strike of escaping, before Mark Reynolds went about four hundred feet the opposite way with two men aboard. The team was mightily relieved - as was Special K, because that meant he avoided becoming the first Diamondback in franchise history to get nine trips to the plate in one game and go hitless. We've seen position players pitch before, but when was the last time one took the loss?

The drama wasn't quite over, as the bottom of the eighteenth saw Ryan Roberts - now playing left-field, after all the positional shenanigans - make a highlight-reel catch off Adrian Gonzalez, leaping up against the wall down the left-field line. While the Padres manager came out to argue it had been trapped, the umpires were having none of it, and Leo Rosales finished things off with a flourish, getting Chase Headley to go down swinging. The game tied the franchise record for longest by innings - we've had eighteen on two previous occasions - and the victory keeps the Diamondbacks' record perfect in such things. They said on the TV we were also perfect playing 15 innings or more, but that isn't quite the case; we did lose against the Padres in fifteen on April 29, 2005.

Obviously, lots of multi-hit games, though they're less impressive when you also take into account the seven and eight at-bat lines which litter the box-score. But Stephen Drew and Miguel Montero both did very well, piling up four hits and a walk apiece, while Chris Young had two hits and two walks. Gerardo Parra had two hits and a walk, while Whitesell walked twice, in addition to his three-run double. How long ago that seems now! Drew, Upton and Young each stole a base too. And here's what has got to be one of the most unique Fangraphs of all time: 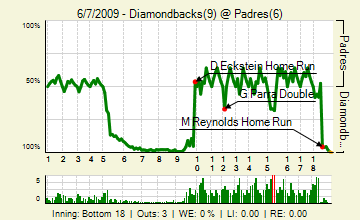 Has there ever been a game where the top three heroes are all relief pitchers? And at no point did the Padres Win Probability get above 64.3% [though it reached that in the middle of each inning, from the tenth through the seventeenth]. Needless to say, it's going to be tough pounding for both team's bullpens tomorrow, and they'll be looking to the respective starters [Jon Garland and Jake Peavy], to go as deep as possible into the game. It may be the case of someone having to take one for the team, like the one last year, where Randy Johnson allowed seven earned runs by the fourth, but pitched a complete game

The win does mean we are guaranteed at least a split of the series, though with the bullpen now whimpering in the corner for its mommy, and facing Jake Peavy tomorrow, it's going to be an interesting contest. It's an evening game, despite it being getaway day, so I'll see you all for that!