Max Scherzer pitched about the ugliest shutout performance you can imagine. It took him 104 pitches, he walked five batters and got a couple of very helpful double-plays. Scherzer seemed to be pitching out of the stretch basically the entire night. But, in the end, what matters is that there were five zeros up there on the scoreboard, next to the Padres' name, and thanks to an extremely wild San Diego starter in the first inning, he left the game with a two-run lead and a shot at the win.

However, the bullpen proved itself once again incapable of holding a lead, blowing it all, and then some, in a single inning. They just couldn't get the third out in the bottom of the sixth: it took Daniel Schlereth and Clay Zavada seven attempts combined to retire that final Padres hitter. After three hits, two walks and a hit batter, Zavada finally retired the opposing catcher, Henry Blanco - he'd also made the first out of the inning, what seemed like an age previously, when the Diamondbacks still had a 2-0 lead.

Some questions have to be asked about bullpen usage. Leo Rosales was sent in to protect a two-run lead - apparently, they said on the radio that Hinch wanted to get Rosales some work. I'd have said last night's far more comfortable lead, might have been a better time to send in a man with an ERA approaching six. And then, when Hinch went to a lefty for that third out, with his team still ahead at that point, he opted for the less experienced, less successful Daniel Schlereth, rather than Clay Zavada. Four batters later, all of whom reached base off Schlereth, Zavada had to come in anyway, though the inning had spiraled out of control by then.

Once again, a single big inning did in the Diamondbacks, and lost us the game, with the six runs allowed the worst of the year, surpassing the previous high of five (inflicted on us six times). That seems to be the key issue: if things go bad, we don't have anyone capable of stopping them. As a result, our record is 13-6 when we're ahead after five innings - we win only 68% of the time, compared to the MLB average, 81%. For Max Scherzer, it's the second time he has shut out the opposition and still ended up getting a no-decision. [And as an aside, our starters have a losing record when they allow one earned run - they're 4-5 in ten such games]

While the bullpen are the most obvious - and, probably, most appropriate - target for our disdain this evening, the offense also deserves to come in for its share of criticism. It basically vanished between the first inning and the eighth, with the Padres pitchers facing only one batter over the minimum, between Eric Byrnes' infield hit to make the score 2-0 for the Diamondbacks in the top of the first, and Justin Upton's solo homer, his eleventh, with two men out in the eighth. Kevin Correia took forever to get the first three outs (34 pitches, to be precise), but Arizona couldn't get the ball out of the infield after loading the bases with one out. Mark Reynolds was the only batter to reach safely more than once, with a hit and both our walks.

The difference between the two teams is most apparent in the top half of the respective orders. The #1-4 spots for both the Diamondbacks and Padres each delivered three hits and two RBI; however, our batters didn't take a single walk, and the San Diego hitters trotted to first eight times all told. Whether they scored from there or not, it proved key, as that helped get Max Scherzer out of the game quickly, turning things over to our inflammable relief corps, who dutifully combusted spontaneously, Daniel Schlereth became the first reliever since 2004 to pick up two losses in his first four career games: ironically, the previous onw was Heath Bell, who got the save for the Padres in the ninth. 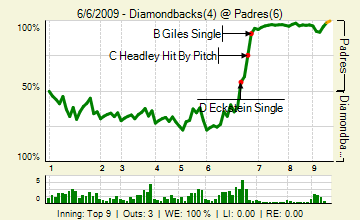 I enjoyed the Gameday Thread a lot, though enthusiasm for the game obviously waned in the bottom of the sixth inning. Mad props to dima1109 in particular, who joined the site just after first pitch, and still topped the list of commentors for the game, with an impressive tally of 85 on the night. Also present were snakecharmer, hotclaws, Muu, kishi, 4 Corners Fan, unnamedDBacksfan, emilylovesthedbacks, TwinnerA, pygalgia, luckycc, mrssoco, pierzynskirules, Fiona, nargel, jazzbo13 and Azreous.

A disappointing result: no doubt about that, but seems to me it probably hurts less, because this never felt like a game where we were seriously in control. Tomorrow brings a Dan Haren start, and we'll be hoping our starter who can go deeper into the game. That's largely because, at this point, the less I see of our bullpen, the happier I think we will all be.