If your digestive system has been taken a pounding of late, blame the Diamondbacks. This was only the second win by Arizona that didn't involve extra innings and/or a save situation, since April 29. That's thirty-four games ago. However, not even that pesky eighth inning could derail Arizona tonight, as Doug Davis and a trio of relievers completed a four-hit shutout - our fifth of the season - and the Diamondbacks rolled to a calm, relaxed and remarkably stress-free victory over the Padres.

The Tums/Rolaids/Alka-Seltzer for our recent indigestion was probably the four-run fifth inning, which took a one-run game and, courtesy of some timely hitting [yes, I know - where was that during the Dodgers series?] turned it into a much more comfortable margin with which to work. An RBI double by Gerardo Parra got things going, and with two out, we added on with a walk to Stephen Drew, an RBI single from Mark Reynolds (who then stole second) and a single by Chris Snyder which scored both the men previously mentioned. Having had a Win Probability of 61.1% after Doug Davis lined-out to lead things off, we exited the inning at 92.2%, and cruised thereafter.

It's pretty much the way things have been: when our pitching has been firing on all cylinders, so has our offense. The last three shutouts by the Diamondbacks, have resulted in victories by 10-0 (April 29, vs CHC), 12-0 (May 16, vs. ATL) and 8-0 (tonight). We joke about saving some of these runs for other games, but it would certainly have helped, for when we've struggled at the plate, the opposition has been little better. The four times we've been shutout this year, Arizona conceded a total of only eight runs; and in the eleven games where we've scored one run or less, we've allowed an average of 2.7 runs, and more than three runs just twice.

Tonight, we slapped out thirteen hits, and helped the Padres extend the latest in their run of streaks [or is it streak of runs?]. After winning ten in a row, they've dropped seven of nine, including four in a row at Petco. Every starter bar Augie Ojeda, including Doug Davis, had at least one hit - Mark Reynolds had a three-hit night, legging out two of the without the ball leaving the infield, and also stole his twelfth base of the season. Only Michael Bourn of the Astros and David Wright of the Mets have more, and Wright's ratio (13 stolen bases, 8 caught stealing) is a lot less impressive than Reynolds (12:3).

Chris Snyder had two hits, while Felipe Lopez, Parra and Drew each had a hit and a walk. However, probably the brightest spot, offensively, of the evening was Chris Young, who homered in the second inning, added another hit later on and also walked twice. The last is particularly welcome, since this evening matched his base on balls total for the entire month of May. While there have been false dawns before, he did seem to have better at-bats tonight, one of the walks coming after being 0-2 down in the count. We'll see what happens going forward, but a night without an infield pop-up from Young is a start, at least.

Doug Davis had another excellent start, shutting the Padres out for six innings, on three hits - all singles - and four walks; two of those were to Adrian Gonzalez, so might well be classed as unintentionally intentional. It did take him 109 pitches to get that far, thanks largely to the first two batters in the fifth, who consumed 21 pitches alone, but he did manage his usual trick of bearing down with runners in scoring position. The only hit the Padres managed there came in the sixth, when there was a single to right-field with one out, and David Eckstein decided to challenge the JUpzooka and try for home. I'm sure you can guess how that ended. Davis's ERA dropped to 3.36: sadly, my first though there is, he should bring a nice return at the trade deadline.

The bullpen continued their impromptu adaptation of Dr. Jekyll and Mr. Hyde - it was the former who showed up tonight, and our relievers turned in an impressive performance, posting three zeros, courtesy of Daniel Schlereth, Esmerling Vasquez and Chad Qualls [the last-named just there to get some work in and shake off the rust, given it was an eight-run lead]. Schlereth was completely devastating, striking out all three batters he faced, with his monstrous breaking-ball, on a total of eleven pitches. Where was that pitch on Tuesday night? 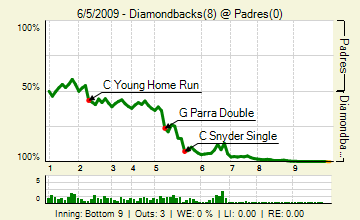 A very light Gameday Thread, with only three of us reaching even double figures - hotclaws led the way, with myself and pygalgia following close behind. Also present: soco, snakecharmer, mrssoco, kishi, Diamondhacks, Muu, TwinnerA, TheDBackFan, 4 Corners Fan, luckycc, Fiona, JUPTON10 and Scrbl. Somewhat understandable, as there either wasn't much hitting going on to speak of, or our Win Probability was somewhere north of 90% and was basically had it in the bag [eighth inning meltdowns permitting].

Sadly, the MFDodgers scored twice in the ninth to beat the Phillies - sheesh, if you can't trust Brad Lidge with a lead, who can you trust? [well, given as he's blown five saves already, the answer is apparently not him to begin with] - so it's basically no change in the NL West, with everyone winning bar the Padres. Still, a solid win for Arizona; always good to bounce back from a shut-out by inflicting one on the other guy. That sets us up with a good chance of winning the series: we'll see if Max Scherzer can bounce back from his rough outing when he takes the mound tomorrow night, and we've then got Dan Haren going for us Sunday. Be nice to have it in the bag before facing Jake Peavy on Monday.