Diamondbacks 0, Dodgers 1: Fire on the Mountain. One run, boys. One.

Share All sharing options for: Diamondbacks 0, Dodgers 1: Fire on the Mountain. One run, boys. One.

Let's take a brief moment to re-examine this series, shall we? We won the opener 3-2, with Billy Buckner pitching a gem, Tony Pena almost ruining everything, and just enough offense to get the job done. We blew yesterday's game in stunning fashion, getting virtually nothing done at the plate after Justin Upton's grand slam and wasting a nearly flawless outing from Dan Haren. Maddening inconsistency, barely any offense...those couldn't possibly have anything to do with the series finale tonight, could they?

Well, just maybe. There's not a lot to say here, folks, and not a lot of creativity can be gleaned from an unremarkable game where the boys in red showed very little effort in any facet of the game.

Jon Garland was on the bump for the Diamondbacks, coming off his last outing where he gave up nine runs (eight earned) in less than three innings. It didn't exactly inspire much confidence for our chances tonight. But he shut the Dodgers down for six innings, giving up just one run on four hits. When he was pulled for a pinch hitter in the seventh, he had one of the D-backs' four hits as well. Garland danced out of trouble in the fifth -- he gave up a base hit to the pitcher and walked Pierre (I'm not sure which is more rare; probably the latter) to load the bases with two outs, but Furcal weakly grounded out and the threat was over. In the sixth, Loney led things off with a triple, and that was too much to overcome -- a Blake sac fly brought him in, and that was it. The entirety of the offense for both teams in this game, and another ridiculous loss tagged to one of our starters.

To get the Diamondbacks' contributions to this game out of the way quickly, let's just review their missed opportunities (what few they had) at the plate and leave it at that.

Notice that in most of these occasions, the 3/4 guys started things off (although never in tandem) and the bottom of the order couldn't get anything done. In short, they managed to make Billingsley throw a lot of pitches (112 in six innings, including four walks), but he still struck out nine and didn't give up any runs.

Not much else to talk about. Jon Rauch pitched a scoreless seventh in a one-run game, erasing a leadoff single on a double play. And Clay Zavada threw a blemish-free eighth. 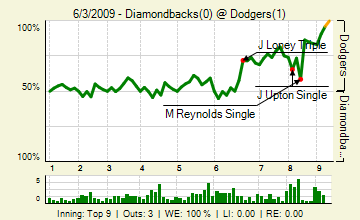 For the Diamondbacks, Stephen Drew had two hits, and Montero and Reynolds each got on base twice with a walk and a single. We had no extra-base hits (for the first time this season) and struck out 12 times, three of them by Parra. All of our pitchers were in the positive for win expectancy, however. For the Dodgers, only Loney reached twice, but every starter save Furcal got on base once. Broxton pitched a flawless ninth (although against the law firm of Young, Byrnes and Roberts, that isn't much of an accomplishment) for the save, and that was that.

Day off tomorrow. I'm with Jim on this one: the hell with this team right now. A day away from them will do us wonders. Friday starts a three-game set against the Padres, with Doug Davis on the mound. A sweep would put us in third place! Yay. And in related news, Randy Johnson got rained out of his bid for 300 against the Nationals tonight. We'll have to see if he goes tomorrow, or if they push him back a bit -- there might still be a chance of him facing us. More on that later...