Diamondbacks 5, Dodgers 6: AJ, What in heaven were you thinking?

Share All sharing options for: Diamondbacks 5, Dodgers 6: AJ, What in heaven were you thinking?

Pop quiz. You go to a restaurant one night. The ambiance is wretched, the service appalling, and the food awful - dessert comes with an unexpected garnish of rat droppings. The next night, do you a) eat somewhere else, or b) go back to the same place, in the optimistic belief it can't possibly be so bad again. If you answered b), then you are AJ Hinch, manager of the Arizona Diamondbacks. For the very next night after Tony Peña got slapped around like the heroine in a Lifetime TVM, and came as close to blowing a three-run lead as possible, Hinch opted to send Peña out there again, to face much the same hitters. Any prizes for guessing what happened?

Yep. Despite the struggles of our bullpen, the Diamondbacks have only lost twice this season when coming into the eighth inning ahead. However, both have come in the past eight days, involved Peña heavily, and saw us blow leads of six and four runs: the Dodgers scored five runs in the eighth this evening, to overturn a 5-1 lead. Peña allowed four earned runs in two-thirds of an inning, and was left there beyond the point where even his own mother would have left him on the mound. At the very latest he should have been yanked after walking Furcal to load the bases; however, he was hung out to die by Hinch, and the four-pitch walk to Hudson which followed, driving in a run, reeked of the inevitable.

Inexplicably, in this ultimate pressure-cooker of a situation, in front of 30,000-plus screaming Dodgers fans, Hinch went to Daniel Schlereth, a man with exactly two (2) innings of experience above the Double-A level. The Son of Stink preceded to stink things up himself, with a bases-clearing double to right-center that tied the game, and a single to the other side of second that scored the fifth run for Los Angeles. That gave them victory, after Broxton retired Arizona 1-2-3 in the ninth - we've now allowed 44 runs in the eighth, more than any other frame.

I haven't gone into the Gameday Thread - and have no intention of doing so [let's just say I would have authorized the use of F-bombs in the comments there] - but can anyone shed any light on the mental processes which led Hinch to his choice of bullpen pitchers in that inning? While I watched the eighth unfold from The Sets, the sound was off [karaoke night in the main bar]. and so I can offer no explanation. I just know that my reaction when I saw Peña taking the mound was, quite simply, "WTF?" I can only presume that every other relief pitcher the Diamondbacks posses had been involved in a band-saw accident that afternoon; there's no other rational explanation.

Dan Haren therefore found himself robbed of another win, after another scintillating performance - in his seven losses and no-decisions this year, he has had six quality starts and his ERA is a marvelous 3.13. He two-hit the Dodgers through seven innings, with the sole blot on his copybook a solo homer to Ethier in the second that landed about twenty rows into the bleachers - Justin Upton took two steps back, then clearly thought, "Nah, no point." The only other hit was a ground-rule double with one out in the fifth, though Haren's walkless streak ended with a lead-off base on balls to Orlando Hudson in the seventh. Hudson was the 109th batter Dan had faced since the last time he allowed a free pass, on May 7th. But it wasn't enough.

I imagine part of the reason for his performance was the confidence that can only be obtained when you trot around the bases, propelled by a grand-slam. For that's what Haren got to do in the top of the second, courtesy of Justin Upton - and just when it looked like Arizona would waste another golden opportunity. They'd already done so in the first, loading the bases with no-one out, but could only scratch across one run, on a Reynolds ground-out. They loaded the bases again in the second, with one out, but Ryan Roberts popped out feebly on the infield and failure once again beckoned. Upton, however, was having none of it, and drove an 0-1 pitch into the bleachers - the flip of his bat that followed might have seemed somewhat show-offish perhaps? Doubt the Dodgers care now.

That one swing drove in more runs than Arizona had managed during any game in Los Angeles for more than a year. However, the Diamondbacks failed to capitalize on a reeling Randy Wolf, instead taking their foot off the Dodgers' throats. We didn't get anyone into scoring position again until the eighth inning, and Wolf faced the minimum 13 batters the rest of his night, which got him through six. In the top of the eighth, back-to-back singles with two out by Eric Byrnes and Chris Young gave Arizona a last chance to pad the lead, but Chris Snyder grounded out, and the rest of the game unfolded as detailed above. Roberts and Felipe Lopez had two hits each, but Haren surpassed them all, going 3-for-3 to get his average up to .280. That's higher than all save three of the starters tonight.

So, through what appears at this point to be rank mismanagement, instead of looking for the sweep, we find ourselves relying on Jon Garland to give us a chance of avoiding defeat in the series. That's a much less comfortable situation, shall we say. Here's the Fangraph - those of a nervous disposition might want to consider averting their eyes... 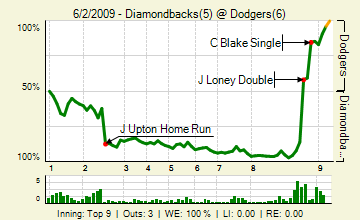 This was a 97.3% chance of victory that we let slip, at the point where Peña got the second out in the eighth inning. Remarkably, it wasn't the worst blown lead of the day in the National League. The Cubs were 5-0 up in the eighth against the Braves - a 98.0% Win Probability - and ended up losing 6-5. So, it is some comfort to realize that, no matter how bad we may feel, Cubs fans feel worse. That nuclear sound you hear in the distance? That was Bleed Cubbie Blue reaching the event horizon, I imagine.

There was a Gameday Thread, and with over 800 comments in it, seems it was quite busy. I am, however, far too upset to look. This may be a first: soco was the only person to get into three figures, with pierzynskirules running backup. Also present: snakecharmer, DbacksSkins, pygalgia, Wactivist, TwinnerA, ASUJon, unnamedDBacksfan, luckycc, IHateSouthBend, 4 Corners Fan, venomfan, Scrbl, mrssoco, kishi, katers, Azreous, Brendan Scolari, jonny-yuma, chem, isoldout, Xeifrank and Turambar. I am going to bed now: once again, nearly at midnight. Fortunately, azreous is on the recap tomorrow, and it's an off-day Thursday: it'll probably be about Friday night before I feel capable of watching any Diamondbacks baseball.