I hate for the title to be that brutal, but it's the truth. The Arizona Diamondbacks did not show up to play baseball today, they showed to play hot potato with the baseball, avoiding catching it and fielding it at all possible costs. Did you think things couldn't get any worse than the bunt-home run they allowed yesterday? Well, it did...

The game started out well enough, with the Diamondbacks managing to execute some fundamental small ball. Base hits and sacrifices scored Felipe Lopez and Justin Upton to put the Dbacks up 2-0 after the first inning. Max Scherzer was pitching well, throwing strikes, and faced the minimum through 3 innings thanks to some good defense by Miguel Montero on a caught stealing and a strike-em-out, throw-em-out double play. However, Scherzer's pitch count was near 50 after only 3 innings - something he still needs to work on if he wants to start going deeper into games.

Things fell apart in the 4th and 5th innings. A single and two walks loaded the bases for the Angels, and with two out, Gary Matthews Jr. doubled down the right field line to score all three base runners. The first error of the game, on third baseman Augie Ojeda, allowed Matthews to advance to third base - where he promptly scored on a straight steal of home. In fact, Montero had the baseball in time, he just completely missed the tag on Matthews, and the score was 4-2. Arizona couldn't capitalize on a strange play in the bottom of the frame - two runners on base, including Augie Ojeda who stalled running to first and by all counts should've been out by 10 steps - and the score remained.

Now, those baserunners in the 4th were Max Scherzer's responsibility, but he did not deserve the fate that befell him in the 5th inning. The first Angel (the pitcher) was safe on a bobble by Mark Reynolds at first base. Then Justin Upton had a ball clank on his glove in right field - second error, second would-be out. Then Felipe Lopez just completely missed a ball right through the wickets for what might have been a double play ball - third error, third and forth outs. With 3 runs across and the inning not getting any better, A.J. Hinch pulled Scherzer for Leo Rosales. Three pitches later, Rosales allowed a 2-run homer to Juan Rivera. Oh but it's not over there, folks. Morales tripled (still only one out) and missed two scoring opportunities, either of which would have accounted for error #4 of the inning had Kendry Morales actually scored. The throw on the triple from Upton missed like two or three cutoff men but Morales stayed at third base. After a pop fly to Upton, he then airmailed the ball home 15 feet over Montero's head - but Morales had respected the threat and stayed at third. Finally, the 9th batter of the inning ended it for Los Angeles.

Arizona managed to make somewhat of a comeback in this game, particularly in the 6th inning - the KidKaster inning, and this kid was surprisingly good. They actually let him, you know, call the game and not just sit there answering uncomfortable questions. Having scored 1 in the 5th, Arizona then had a 5-run inning themselves - a 2-run double by Clark, and singles by Drew, Reyolds, Parra (mirred in a 1-for-18 w/ RISP slump) and Montero raised the score to 9-8. Well, now that's just a one-run game! The offense is coming to life, the Angels pitchers look a little shaky... The previous high in a comeback this season was only 4 runs - could Arizona actually rally from 9-2 to tie the game?

The short answer - no. Zavada continues to be the lone bright spot in the bullpen and pitched yet another scoreless inning (with the help of his infield behind him) to extend his streak to 15 games, but Jon Rauch gave up a solo home run in the 8th and Tony Peña continues to self implode and allowed a 2-run shot in the 9th. Arizona's offense could not mount any sort of attack against the Angels' relievers - Bulger, Speier and Fuentes pitched the 7th, 8th and 9th and only Bulger allowed a 2-out double by Lopez. Los Angeles pulled away in this one, and the Diamondbacks sputtered to a 12-8 defeat. 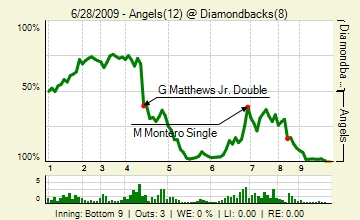 Clearly, fangraphs does not chart defensive WPA. It's kind of hard to tell from the play log the combined sucktitude of the errors, but really, why would we want to put numbers to that anyway. I really felt we were about to surpass our 5-error game of 9 years ago, but no, the defensive miscues were just counted as bad fundamental baseball. Not much positive to talk about in the gameday thread (except for Muu being thrilled about Brazil's win earlier today), though there were 270 comments. Jim - you'll have to have an open fire zone when more people are actually around! I lead the way with 56, kishi not far behind at 48. The other 19 people present were unnamedDBacksfan, Giannaros, Jim McLennan, AJforAZ, pygalgia, sayheyupton, Muu, 4 Corners Fan, Zephon, katers, soco, TwinnerA, gasgarza, Diamondhacks, Fiona, jazzbo13, Wailord, emilylovesthedbacks, and jonny-yuma.

And so the Diamondbacks end interleague play with a 5-10 record, thanks two two sweeps by the Mariners and Angels, and having lost 8 of their last 9. They hit the road to face some opponents they are at least somewhat familiar with - the Cincinatti Reds and Colorado Rockies. Off-day tomorrow, folks... enjoy not losing while you can.

[Jim's notes] One thing I couldn't find mentioned anywhere is that the team actually held a team meeting before yesterday's game. That was their third in less than two weeks - curiously, each coming with Max Scherzer on the mound. The other two were followed by wins, this one...not so much. Here's the audio clippage: remember, this took place prior to the fiasco which unfolded yesterday.

There's also some fuss over Justin Upton's reaction at the end of the inning reported in the Republic today: "After fans aired their displeasure with boos and mock cheers, Upton responded by fake-tossing a ball into the stands at the end of the sixth." It also reports that neither Upton, Lopez or Reynolds were available to speak to the media after the game. Normally, this kind of thing would seem trivial, but the way things have been going of late, it's certainly not any help.