Share All sharing options for: Everything you wanted to know about labrums [but were afraid to ask]

The news that Brandon Webb is likely to require surgery on his labrum seems a good opportunity to discuss some of the questions arising from the report. These would include, "What is the labrum?", "What has he done to it?", "I had a friend who had that pierced" and, perhaps, "Would Webb be better off seeing a gynaecologist?" Ok, scratch the last one, and replace it with a couple of more pertinent ones for the Diamondbacks: when will he be able to pitch again, and what are the odds for him being as good as he was before the operation?

Bear in mind that 2009 is the last guaranteed year of Webb's contract with the team. There is a club option for 2010: before this season, that seemed a lock to be exercised, but now... It would cost the Diamondbacks $8.5 million to exercise the option, or $2 million to buy it out. [It was originally $500K, but the buyout increased by $500,000 each time Webb finished in the top five of the NL Cy Young voting - which he won in 2006, and was runner-up in for 2007 + 2008] That decision may depend on the prognosis for our ace's recovery, but it doesn't h1elp that the option must be exercised within five days of the 2009 World Series concluding, so the team can't hang on and see how he's doing in March. it has already been suggested that he may have pitched his last game as a Diamondback. Here's Josh Byrnes' recent comments on Webb:

So, what is your labrum anyway?

It's from the latin for 'lip', which explains the piercing comment. However, in this case, it's full name is the glenoid labrum, a ligament that goes around the socket in your shoulder. (there's also one in your hip, the acetabular labrum). The actual depression in your bone is quite shallow, so the labrum makes it deeper, effectively increasing the surface area of the shoulder joint, and protects the edge of the bone.

A torn labrum is classified by location.The most common for pitchers is a SLAP lesion, standing for superior labrum anterior posterior - basically, around the area where the biceps tendon attaches to the top of the glenoid. SLAP tears are subdivided into four grades [PDF file], based on severity: a grade I is fraying but no separation, while grade IV have the tears extending into the biceps with flaps moving and catching in the joint.

How did Brandon injure himself? And why did it take more than two months to find out?

At the present time, we're not 100% certain, and it may not be clear until exploratory surgery is carried out. However, the most likely scenario involves a labrum tear, triggered by the fearsome forces involved in pitching a baseball [something described by orthopedic surgeon Dr. Timothy Kremchek as "the most unnatural act in sport"], which feels simply like a slight 'catch' in the overhand throw. The resulting pain and loss of velocity is basically the same as results from any other shoulder injury.

However, with the labrum being buried deep in the shoulder, these tears are difficult to see, even in a magnetic resonance imaging (MRI) scan, which sees soft tissue and can be used to produce 'slices' of images. The only way to be sure at the moment, is for an arthroscopic procedure, in which a tiny camera is inserted into the shoulder through an incision - this will allow a doctor to examine the labrum directly, and check for damage.

Can it be fixed?

There is almost no alternative to surgery for a torn labrum. While this can sometimes be avoided for a torn rotator cuff, with a careful regimen of strengthening action instead, the difference is that the rotator cuff is a group of muscles, which respond to exercise. The labrum is a ligament, so is collagen-based, and so you might as well try to exercise your skin. Surgery is almost always required, though the scope and scale of the surgery does vary.

If the labrum is merely a little frayed, with a loose edge that is 'catching' as the shoulder moves, then the offending fringe can be removed, along with any fragments, and that may restore full movement. This is called "labral debridement", which sounds more like...well, let's not go there, shall we? However, if the tear is more severe, then techniques have recent;y been developed to place 'anchors' into the bone and tie the labrum to the bone, allowing it to heal in the appropriate position. 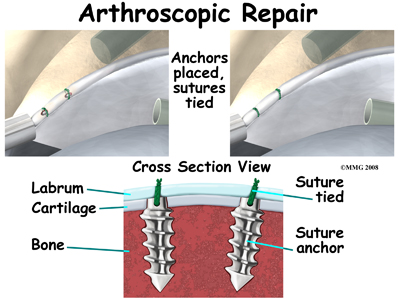 How long will he be out?

Recovery time depends upon a variety of factors, including things such as where the tear was located, how severe it was and how good the surgical repair was. After the operation, six to eight months is quoted for the resumption of normal activity, with the appropriate use of physical therapy and strengthening exercises. However, what would generally be defined as 'normal activity' is not likely to include the hurling of a baseball at 90 mph, with a heavy sinking motion.

There is typically a period of three to six weeks of basically complete immobilization [you might get to take the sling off in the shower], another three to six weeks regaining range of motion, and then months building back the necessary strength. Based on the examples below, I'd say even if Webb was to have the operation tomorrow, his availability for Opening Day 2010 must be considered in doubt.

Better than they used to be. Writing as recently as 2004, injury guru Will Carroll described is as "baseball's most fearsome injury," and said bluntly, "If pitchers with torn labrums were horses, they'd be destroyed." Fortunately, there have been significant improvements in the surgery, the rehabilitation process and consequently the odds of return to full capacity. It's still not a sure thing, but it is now less the career killer it was, at the original time Carroll wrote. The odds may also depend on the pitcher's action: those who throw with a true overhand motion may be more affected than those who pitch three-quarters or with a moresidearm action.

However, it's far from a sure thing, and there is a very small sample size of top-quality pitchers who have recently gone through the process. Kelvim Escobar had surgery to repair his torn labrum last July. He did make it back to the majors earlier this season [11 months later], but lasted only one start and is now back on the DL - it's uncertain whether he'll pitch again this season. Toronto's Casey Janssen missed the entire 2008 season after an operation in March. He came back in May and made five starts but also broke down, with inflammation in his throwing shoulder.

Maybe Webb can get some advice from Jon Rauch, who has been under the knife not once but twice for this affliction. He had his first torn labrum while a top minor-league prospect in the White Sox system, which cost him almost the entire 2001 season. But in May 2005, he required further surgery, though it seems likely to have been more "labral debridement," since he returned to the majors in September that year. Ironically, a torn labrum also let him become the Nationals' closer, when Chad Cordero went down with one in April 2008.

Cordero is an interesting case, because like Webb, it seems to have taken some time for an accurate diagnosis to have been made. He last pitched on April 29, but it was two months later that the torn labrum was found. Surgery followed in July, and Cordero was signed to a minor-league deal by the Mariners this March, after auditioning for several teams, including the Diamondbacks. However, he still hasn't returned to the majors, and the latest report, from a couple of weeks back, had Seattle manager Don Wakamatsu saying, "His velocity is still not where it was before."

So, to sum up then, for those who like to skip to the last paragraph?

If it is indeed a torn labrum, it certainly has the potential to end Webb's career, though whether it will actually do so is almost impossible to say at this point. Looking at the recent victims, it's not re-assuring to see what has happened. If I was the GM and had to make a decision, right here, right now, whether to exercise the 2010 option for Webb... Well, let's just say, I'm glad I'm not. But it strikes me that the insurance companies, whether their fears were connected to this issue or not, may just have helped the Diamondbacks dodge a very expensive bullet, in the shape of a long-term extension.