Share All sharing options for: Diamondbacks 1, Angels 2: Every day, something different(ly awful)

Greatest scoring summary line of all time...as long as you're not on the receiving end, that is. Go back and read it again. It helps if you hum the theme from The Benny Hill Show while doing so. Bask in the mind-numbingly awfulness of it all. An inside-the-park home-run for Aybar, on a play where he wasn't even trying to get the ball out of the infield, thanks to not one, but two errors on the same play by the Diamondbacks. Oh, how the nattering nabobs of negativity over on azcentral.com will be having a field day with this - and, frankly, I can't blame them. Each in their own way, the past two days are the kind of games that make it very, very hard to defend the Diamondbacks from their critics.

The hilarity took place to start the top of the sixth inning, with the Diamondbacks clinging to a 1-0 lead. They'd got there in the fourth on a leadoff single by Mark Reynolds, who stretched it into a double thanks to an outfielder error, then came to third on a ground-out and home on a sacrifice fly by Tony Clark. However, Willie Aybar's bunt was charged by both Doug Davis and Clark; Davis got there, but had to wait for Lopez to get over to first. Without much chance to get the runner, he threw, but behind Lopez and the ball went foul. As Aybar motored on for third, Justin Upton retrieved the ball, but the Jupzooka misfired badly - I think he rolled a 1 - overshot Reynolds at third, and Aybar came all the way home. Just your average bunt home-run... :-(

Outside of the error, Doug Davis pitched very well - but not well enough to get the win which, as noted before, requires him to deliver shutout baseball. He ended with a no-decision for seven innings of work, with just the unearned run to show for it. He allowed five hits, all of them singles, and three walks, while striking out eight Angels batters - that's the most in 22 starts since August 24th last season. However, it was perhaps better that he allowed that run to tie the game - it would have been even more demoralizing for him to leave with a 1-0 lead, only for Chad Qualls to cough up a ninth-inning homer.

Which is, of course, exactly what Qualls did, offering up a one-out meatball to the Angels' catcher, who smacked it an estimated 428 feet to center for the go-ahead, and winning, run. Remember my comment last weekend about how the Arizona bullpen has sucked, but they hadn't actually cost the Diamondbacks many losses? Seems like they heard me...and have been trying to make up for lost time. In the eight games since the start of the Seattle series last Friday, Arizona have gone 1-7, and the bullpen has picked up most of those defeats, being 0-4, with one each for Peña, Zavada, Vasquez and Qualls.

You'll probably find this hard to believe, but do you know who has been our best reliever in the past month? The answer - and you might want to sit down first - is Jon Rauch. Yep: the man for whom no abuse was adequate in the first third of the year, and who had a 9.31 ERA in April. He worked a smooth, impeccable, 1-2-3 eighth inning today, and since May 27, has been unscored upon in thirrteen of his fourteen appearances. He has an ERA of 1.17 in that time, covering 15.1 innings, holding opposing batters to a .157 average (8-for-51, with no extra-base hits). We've seen how quickly things can turn, but I know I'm not feeling quite the same sense of dread any longer, when I see him warming up.

On the other hand, the offense...wasn't. We didn't have a hit with runners in scoring position all day; not that we had all that many runners in scoring position to begin with. There was a certain sense of deja-vu in the bottom of the first, which was probably our best chance to break through - just as last night, Gerardo Parra was up with the bases loaded and only one out. Yesterday, he struck out; today, he went one better, grounding into an inning-ending double-play. Outside of the run scored by Reynolds, the only other man to get past first was Alex Romero in the fifth: he was stranded on third when Upton started at strike three. Reynolds had a hit and two walks; Miguel Montero a pair of hits; Romero a hit and a walk. 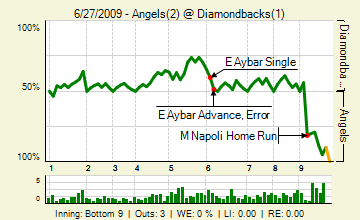 Not a bad turnout, though with a spike in comments after "that" play, mostly along the lines of "OMG! WTF?" - I can't wait to relive it tonight in high-definition... kishi and Sprankton led the thread; also present were hotclaws, snakecharmer, Muu, IHateSouthBend, acidtongue, Zephon, 4 Corners Fan, Wailord, gasgarza, unnamedDBacksfan and soco. Roll on tomorrow, and we'll see what bizarre way the Diamondbacks can find to lose that game.