Share All sharing options for: Diamondbacks 3, Angels 12: Buckner puts AZ behind the eight-ball

This is not the game I wanted to see after my long, Cox-enforced absence from watching my beloved Arizona Diamondbacks. This was not the game for which we upgraded the living-room to high-definition. No: this was the game which had me contemplating an emergency call to Cox, requesting the immediate removal of cable, Internet, so we could return to our splendid isolation. All previous bad innings this year were blown out of the water, as we allowed eight runs in the second, to basically end this when it had barely got started. It was the worst frame for us since Juan Cruz got tagged for nine runs by the Padres, in the opening frame on May 17, 2006. That's a total of 520 games, and 4,657.1 innings of pitching, without such a wretched result.

Billy Buckner. Billy Buckner. Billy, Billy, Billy. What can I say? Before the game I was speculating if any pitcher had a home ERA five times that of his road one. I need to revise that now. Here is Buckner's home line:
Buckner at Chase: 21.1 IP, 39 H, 9 BB, 8 HR, 34 ER, ERA 14.34
That's more than six times his road ERA, which remains at a very acceptable 2.33. However, overall, his season ERA is a wretched 8.63 and if he starts another game - in Phoenix especially - I expect to see a mob with torches descending on the stadium, demanding severed heads. Anyone would be an improvement. If Petit isn't ready, bring back Augenstein. Or Casey Daigle. Anyone but Buckner. [The above words, written roughly during the third inning, proved prophetic, as Buckner was optioned after the game to Reno: I think he was likely whisked directly from the dugout to the Greyhound bus station]

And it was all going so well, too, for at least the opening, oh, four outs. He retired the Angels in order , and it looked like Arizona would get out of the gate first. Felipe Lopez singled on the opening pitch, and then stole second, though this was rendered less significant by Stephen Drew walking on four pitches.  Weaver was all over the place, falling behind Justin Upton, but getting him to fly out, and then walking Mark Reynolds to load the bases with only one out. However, Gerardo Parra and Chris Young both struck out swinging, to leave the score at zero: however, almost the entire Angels line-up would get to cross home plate before the next Diamondback would even stand there.

Torii Hunter grounded out to start things off. However, the only out to be made before he'd come up to bat again was the Angels pitcher grounding to second, and even that drove in a run. Hunter avoided the shame of making both the first and last out by homering, a two-run shot that marked the last batter faced by Billy Buckner as a current member of the Arizona rotation. Those two plate appearances in the same inning bookended a spell where the Angels were 7-for-9 with a walk against BB, getting almost as many hits with runners in scoring position (five), as Arizona had in the entire Texas series (six).

Needless to say, it's hard to for anyone, players or fans, to sustain much enthuasiasm when you come to bat in the second, and the cold, hard numbers show you a Win Probabiity that has already shrunk, with the rapidity of testicles dipped in ice-water, to a mere 3.8%. The seven and a half innings which followed were basically a mere formality, but let's pick through some of the finer moments and see if any cause for pleasure could be found - in other words, much the same as we've already done far too often this season.

Felipe Lopez had a couple of hits and a walk. Stephen Drew had a couple of walks, but also homered, a two-run shot which was his fifth of the season, and Tony Clark drove in the other run, He followed up last night's shot with another long-ball of his own. That's the first time he has gone deep on consecutive nights since September 16-17, 2005 against Colorado, when he had a pair of two-homer games. The bullpen weren't bad, though after playing twelve last night, must really have been hoping tonight's starter might last more than 1.2 innings.

They combined to allow three earned runs in the remaining 7.1. Clay Zavada pitched 1.2 shutout innings, even stranding a couple of runners inherited from Blaine Boyer in the fifth. That extended his career-opening streak of games without an earned run to fifteen, covering 14.1 innings - the games, as noted by 'charmer yesterday, are now the sixth-best streak of all time. #5 is Joe Smith of the 2007 Mets, who went seventeen games before allowing his first eaened run. Boyer, incidentally, almost matched his previous total career at-bats (three), in mopping up after Buckner - one BB following another. He added two ABs, striking out twice, though took a total of 11 pitches for him to do so. 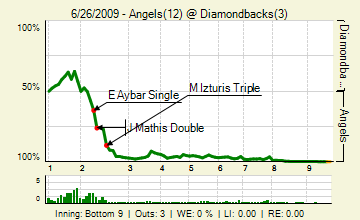 The second inning fell apart so quickly, that there really wasn't very much negative territory left for anyone else to fight over. That frame also turned off interest in the Gameday Thread like Cox disconnecting a long-standing customer: I think about 150 of the 200 comments were before things fell apart.. soco led the way, while I celebrated my return to the 21st century in second place. Also present: kishi, 4 Corners Fan, DBacksCynthia, hotclaws, gasgarza, Wailord, TwinnerA, NewJackCity, jazzbo13, Diamondhacks, unnamedDBacksfan, acidtongue, terps721, Sprankton, Snake Bitten and snakecharmer.

It's the kind of game that makes it hard to sustain enthusiasm, because the difference between the two teams was so painfully obvious. But again, it's worth pointing out that tonight's contest would likely have been a damn sight more even if Brandon Webb has been starting, rather than Billy Buckner. I'm thinking of revamping the D-backs Watch, and a possible candidate (along with the Scherzer/Kershaw one) would be Webb vs. the Triple-Headed Beast of Suck who have replaced him. Until I get that updated, in fourteen starts, the latter are now 2-9, with an ERA of 7.77, while after 74 games last season, Webb was 11-3 with a 3.04 ERA.

More on Webb - or, to be specific, Webb's shoulder - tomorrow, as I've been spending my idle time looking into the subject of labrums. Or should that be labra? Or labrii? Whatever...