Thanks, Jim, for raising the bar by saying my recap would be as good as the past few days! It would help if I had anything spectacular to work with... but, really, aside from some timely home runs, the only good thing about tonight's game was the giant walking taco. But I'm getting ahead of myself...

The Diamondbacks tried to win only their third series of the year at home tonight in the rubber match against the AL West-leading Texas Rangers. The second batter of tonight's game was Omar Vizquel, who smacked the first hit of the game to right field for his 2,678th career hit. With that, he passed Luis Aparicio to become the Venezuelan leader for hits. But, pitcher Jon Garland was just toying with him, and Vizquel was then part of an inning-ending double play. In the bottom of the frame, Mark Reynolds took advantage of Justin Upton's speed and smashed a home run for a 2-0 lead over the Rangers. That lead, however, was short-lived. In the top of the 3rd inning, the wheels came off the wagon for Garland and the Diamondbacks' infield defense. (You'd think they'd practice this every once in a while... oh wait...) The inning started with two men on and nobody out, and after a sacrifice bunt by the pitcher, a walk loaded the bases.

Dude, Garland. You don't just put people on base ahead of Omar Vizquel and Michael Young, because what do you think is going to happen?? If you guessed a botched double-play ball by Reynolds at first, a bases-loaded walk to Young, and then another booted double-play ball by Augie Ojeda at third... well, you would be correct. Ojeda redeemed himself with another chance at the double play to end the inning, but not before the 2-0 score became 3-2 in favor of Texas. The Rangers scored two more runs in the 5th on an Andruw Jones home run. Justin Upton's speed once again helped him score in the 6th inning - this time on a wild pitch - but the Rangers got that one right back in the 7th.

Okay. Pop quiz time. Bottom of the 7th, you're down 6 to 3, and you pinch hit for Garland with two outs and nobody on. Do you: a) send new backup catch Luke Carlin up for his first chance of the year; b) ask Chris Young to pinch hit and do something good; or c) put in Tony Clark for a pinch hit home run. If you guessed A, you would be an idiot, because you don't burn your backup catcher in Carlin. If you guessed B, okay, I don't blame you, because you knew that CY was feeling better and was available to pinch hit today. If you guessed C, ding ding ding, congratulations you could be a big-league manager! A.J. Hinch sent up Mr. Veteran Presence himself, and Clark knocked the teeth off the ball, homering to deep right field. That was his third home run of the season (first since Opening Day) and 250th of his career.

Clay Zavada came in to pitch the top of the 8th inning, and he pitched a very fast, 3-up-3-down inning. He was in, he got a fly ball and two strikeouts and he raced back to the dugout. Would the momentum shift go with him? Why yes it would! Upton, once again safe at first because of his speed, would score on a monster 2-run, game-tying home run by none other than Mark Reynolds!! Frank Francisco had left a couple of pitches that Reynolds had missed earlier in the at-bat, but he did not miss that one and promptly deposited it in the bleachers. (I think that's where it went?) The game was tied at 6 all, and Garland was off the hook for his team's poor defense. (He went 6.1 innings and 4 of his 6 runs were earned but it certainly felt less like his fault than his numbers show.)

After that, the Diamondbacks' bullpen was used up pretty quickly - after Gutierrez in the 7th and Zavada in the 8th, Chad Qualls came in for the 9th, Tony Peña needed Scott Schoeneweis's help to get out of the 10th, and Jon Rauch pitched a great 11th inning, working around more bad plays behind him (or rather in front of him, as the error was on Miguel Montero). The Diamondbacks' offense stayed pretty quiet in extra innings, unfortunately. Into the 12th we go, and out comes one of our last hopes, Esmerling Vasquez, who looked like he'd have to go multiple frames tonight. (Honestly, I'm a bit surprised A.J. didn't send Rauch back out - he was only at 20 pitches...) Alas.... no, that was not necessary. Because, you see, with one on base and two outs, after a dropped foul tip by Montero on a 2-2 pitch, Rangers first baseman Chris Davis (who ended the night 4-for-5) would hit a 2-run home run to deep right field. David Murphy followed that up with a solo blast to make it 9-6 going into the bottom of the inning.

Believe it or not, the Diamondbacks actually had a chance in the bottom of the 12th inning. It was our turn to have two on and nobody out, and Drew and Upton would eventually score on a bloop hit by Montero. Unfortunately, Ryan Roberts couldn't get the ball out of the infield, and he grounded out to end the game, 9 to 8. 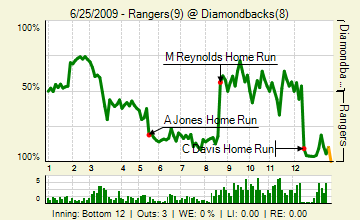 A couple of other notes about tonight's game. Eric Byrnes, hit on the hand by a pitch in the 2nd inning, will be out 4-8 weeks after surgery to repair his left metacarpal. A.J. Hinch still has not yet been thrown out of a game as a big-league manager, despite his efforts in the 10th inning while arguing a bad call on a pickoff throw at first base. Everybody, and I mean everybody - fans, broadcasters, Snake Pitters, probably the players (though it wasn't as funny as last time) - wanted him to get tossed; he needs to take some lessons from Kirk Gibson or soco on the proper things to say! And amusingly, this 12 inning, 4 hour, 22 minute night game was Texas's getaway game - they fly back home tonight to face San Diego this weekend.

The Los Angeles Angels of Anaheim come to Chase Field this weekend for a 3-game series starting tomorrow night. Probable starters are listed as Weaver vs Buckner, Lackey vs Davis, and Palmer vs Scherzer.