Diamondbacks 1, Rangers 2: They're No Rangers to Love

Share All sharing options for: Diamondbacks 1, Rangers 2: They're No Rangers to Love

Dan Haren took the mound for the Diamondbacks tonight against the Rangers, looking to get the D-backs their third winning streak of the month. Yes, the previous streaks were just two games apiece; it sounds much better this way. Despite Haren's miniscule ERA and WHIP, he found himself stuck with a 6-4 record going into tonight's matchup, which if nothing else is a testament to how worthless wins and losses are as a measure of a pitcher's value. Consider this very recent example:

Those are the numbers through the first nine starts of the season. Brandon Webb (A, 2008) certainly pitched very well to start the year and was deserving of his wins (and yes, Webb's inclination to pitch to contact means Haren's K/BB ratio will be better), but Haren (B, 2009) had no business being stuck with a losing record to that point. Or any point.

"But Chris!" you say. "This was Haren's 15th start of the season! Why bring this up now!" I'm glad you asked, Slappy. One, I forgot about a more in-depth analysis a month ago when this was more timely, and two, it's kinda like a microcosm for tonight's results, where Dan Haren was once again stuck with a loss he didn't deserve. When your pitcher runs out another ho-hum 7 IP, 4 H, 2 ER, 1 BB, 8 K line and gets pushed back to just one game over .500, there's a problem.

Let's work our way there, shall we? Haren was dealing in the first, setting down the side in order, but he ran into a bit of trouble in the second. Uncharacteristically, he plunked Marlon Byrd with a pitch and then walked Hank Blalock, putting the first two men aboard with nobody out. Even Danny boy couldn't wiggle his way out of that one, as a Taylor Teagarden double plated the first run of the game. Still, he got out of a second-and-third-with-one-out jam and limited the damage to just that one run.

Meanwhile, the Arizona offense was up to its usual anemic tricks. Felipe Lopez started the first with a single, but  Stephen Drew flied out and Justin Upton grounded into a double play. In the second, Mark Reynolds reached on an error, and Gerardo Parra promptly grounded into a double play. Haren tried to help his cause with a double to right in the third, but after a Lopez walk, Drew couldn't extend the inning. Upton led off the fourth with a hit, but three groundouts put any thoughts of a run to rest.

Haren still didn't seem quite settled in when the top of the third came around. Ian Kinsler started things off with a little flare into center field, stole second, and scored on a David Murphy base hit to make it 2-0. Byrd reached with one out to put runners at the corners, but again Haren got out of the inning without putting a crooked number on the scoreboard. From that point on, he was completely locked in, facing only one hitter above the minimum for the next four innings (and that was on a Reynolds error).

Arizona did manage to get a run back in the fifth thanks to some old-school NL ball.  Miguel Montero reached on a knock to start the inning, and Haren bunted him over on a 1-2 count to get him in scoring position (it could be argued that he should be swinging, given the ineptitude of this lineup, but that's another topic for another day). Lopez capitalized by slapping a ball into center field to score Montero to cut the lead in half. But Haren had already thrown 95 pitches through five, so time was of the essence.

In the sixth, Haren retired the side quickly on just 10 pitches, keeping his pitch count somewhat respectable. Parra did his best in the bottom half to get Haren off the hook for the decision, smacking a triple with one out. But who was due up for the Diamondbacks? Why, the twin-headed infinite swirling vortex of grotesque suckitude known as Tony Clark and Eric Byrnes, of course! Clark struck out for something like the 48th time in 49 at-bats this season (okay, the percentage isn't THAT high), and Byrnes hit a little 36-hop dribbler to second and the threat was over. One could imagine Haren in the dugout sharpening the edges of one of his bats out of frustration.

Sitting at 105 pitches, Danny lumbered back out for the seventh inning and went through the 8-9-1 spots almost as efficiently as the inning before. Parra made a nice play on a sharply hit ball by Kinsler to end it. Augie Ojeda pinch hit for Haren in the bottom half, but the offense could do absolutely nothing, so once again Haren was in line for a no-decision at best and a loss at worst.

Unfortunately, there's not a lot of good stuff to talk about from that point on. Jon Rauch and Chad Qualls were good out of the pen to keep it a one-run game -- Rauch worked around a leadoff walk with a double play and a strikeout, and Qualls had his good hard fastball working, inducing three groundouts in the ninth. You'd think asking the offense to get two measly runs would be reasonable, but such was not the case. Drew doubled to lead off the eighth, yet the middle of the order could do nothing to bring him home. And with the game on the line in the ninth, who'd we have due up? The indomitable law firm of Clark, Byrnes and Young! No bonus points for guessing the level of ineptitude displayed by THAT trio in a clutch situation. 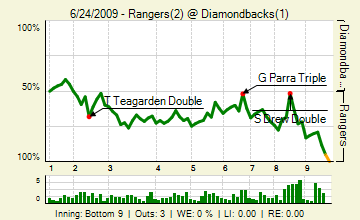 Can we please get Tony Clark the hell out of the starting lineup, if not the roster completely? I don't doubt he's a nice guy, but at this point I'm kinda rooting for someone to push him down the dugout stairs so he's mildly injured for another 15 days. There is no reason a team with the second-worst record in baseball should be playing an aging veteran ahead of a youngster (well, relatively) who was showing signs of coming around in his second stint with the big league club. At least with Byrnes we were somewhat convinced he could play baseball sometime in the past two years.

Who showed up for the Diamondbacks today? Well, the pitchers certainly did. Lopez reached base three times, and Parra had an RBI. But that's it. Nobody else reached base more than once. Of course, our arms shut down the Rangers lineup; only David Murphy reached base twice (H/BB), because the team had a total of four hits and two walks. And still we lost this game. Credit goes to Vicente Padilla, who managed to win a start without run support for once by matching Haren pitch for pitch (7 IP, 6 H, 1 ER, 2 BB, 3 K).

A much quieter GameDay Thread today, although who could be blamed for staying away from this train wreck? Skins led with 77 posts, and there were just over 200 total. Present: snakecharmer, kishi, DbacksSkins, hotclaws, pygalgia, 4 Corners Fan, emilylovesthedbacks, Fiona, venomfan, unnamedDBacksfan, Azreous, soco and jonny-yuma.

Needless to say, I'm excited about our chances.