Diamondbacks 2, Mariners 3: Are you kidding me?!?

Share All sharing options for: Diamondbacks 2, Mariners 3: Are you kidding me?!?

"I missed it, it's a play I should have made."
Are you kidding me?

It's official, we've run out of ways to say that we've run out ways to describe this team's knack for snatching defeat from the jaws of victory. Nevertheless, without further adieu...

On a sunny afternoon in beautiful Seattle, Washington the 29-40 Arizona Diamondbacks took the field against the 34-34 Seattle Mariners to compete in a live sporting event under the auspices of Major League Baseball. According to the official rules of Major League Baseball it is necessary for a team to score more "runs" than their opponent in order to win a game. The devil is in the details for the Arizona Diamondbacks as they've found out that it's difficult to win Major League Baseball games when they have only two above-average hitters. Once again, Justin Upton and Mark Reynolds more-than-pulled their own weight only to be let down by their teammates. Against the always dangerous Felix Hernandez they combined for the only runs of the game - off the back of Mark Reynolds "how did that get out here?" home run.

Others had their opportunity to chip in offensively and all came up woefully short - none more so than Snakepit-favorite Eric Byrnes. In the fourth inning Always-There Bear managed to turn a no-out, bases loaded opportunity into a 5-2 double play (are you kidding me?). Augie Ojeda followed that up with a strikeout and the offense once again came up with goose-eggs - a theme for the night, aside from the afore-mentioned eighth inning outburst. Drew continues to alternate hot and cold (more cold than hot) with three more strikeouts. Parra continues to cool down. Tony Clark had a mediocre evening; with the only silver-lining being that it was his first start of the season in which he didn't strike out (he's now only striking out in 50% of his at-bats on the season!). And perhaps most perplexingly, Miguel Montero continues to get the full-time starting nod over Chris Snyder. I love Miguel Montero - he's my favorite current DBacks - but this is a perplexing decision considering Snyder's offensive superiority and shiny new contract. Is it time to add Montero's name to the mix for the mid-season fire sale?

Of course, the offense wasn't the only part of this team deserving of a walk of shame back to the dugout. The relief corps came into tonight's game with the third-worst ERA in the majors and they managed to increase it giving up two runs in one and two-thirds innings. Davis, while not the prettiest game he's ever pitched, more than put himself in line for the win allowing only one run through seven innings - five walks and 13 baserunners be damned! Four relievers were used to finish the game out and all, save Qualls, have blood on their hands. Schoeneweiss continues to have problems getting lefties out, Rauch couldn't get a big out to save his life and Zavada continues to find a remarkable number of ways to lose ball games for a reliever with 0.00 ERA.

However, a lackluster offense and an even-worse bullpen is old news. We've all seen it, denied it, grown angry at it and have now moved on to that narrow precipice between depression and acceptance. But what made this game special is that they really did find a new way to lose. Just when things start to get bleak and, let's be honest, boring, it's nice to have a veteran leader like Tony Clark step in, put the team on his shoulders and say, "boys, let's really give them something to talk about." How else can you explain him missing a routine, waist-high strike for the third of the ninth inning? It's not as if this team had much of a likelihood of winning the game in extras, but at least you force the other team to beat you. Instead, Clark muffs the routine out and the boys in red get swept by the buzzsaw known as the Seattle Mariners. Should we have expected anything less from the man who's on the team for reasons that have nothing to do with playing ability?

At least the KTAR talking heads will have no shortage of material to run into the ground on their quest to re-write history and paint themselves as the voices of wisdom and reason that always knew what was best for this team.  And then they'll blame us, the fans, for being the reason that this team sold its soul on the altar of veteran leadership when they were the one that sold us this jive in the first place. Kudos to you, Mr. Clark, and kudos again. 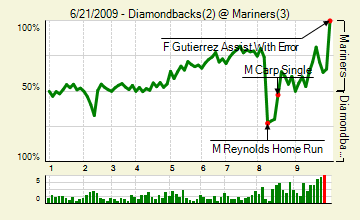 [Jim adds] Just dropping in before the plug gets pulled on the Internet. I don't have much more to add to this fiasco, other than that the myth of Tony Clark's roster spot being due to his defense is no longer tenable. As Dahlian said, "Just be sure to mention that Qualls doesn't deserve to be God-Emperor of Suck.  Sadly, there were no good photos in the queue of T.C. looking at his glove with bemusement." hotclaws had most comments, ahead of kishi - also present in the GDT, unnamedDBacksfan, pygalgia, Azreous, Diamondhacks, acidtongue, TwinnerA, emilylovesthedbacks, 4 Corners Fan, sayheyupton, gasgarza, Sprankton, rapdawg, Wailord, Scrbl and Muu.

With that, I disappear off the grid. See you Tuesday sometimes, hopefully...