Does the Arizona bullpen really suck?

Share All sharing options for: Does the Arizona bullpen really suck?

After Friday night's fiasco, in which Schoeneweis and Pena contrived to turn a three-run lead into a deficit while retiring two batters in the eighth, it might not seem like there's any doubt on the matter. Why, yes, they do suck. But it's worth looking into the numbers a little deeper than the purely anecdotal evidence. Every relief corps in the league is going to blow some late leads now and again - as noted at the time, our implosion wasn't even the most extreme of the day, as the Indians bullpen blew a five-run lead after seven frames. They stick in the mind, that's for sure, and this perhaps gives them a perceived commonness beyond the reality.

After the jump, let's delve into the stats and see what we can find... [Note: all figures exclude Saturday and Sunday's games. Since we're supposed to have our Internet moved at some point today, I scheduled this post well in advance, so you'd have something to read on the off-day, even if we were 'off the grid']

The Diamondbacks' bullpen ERA is now 5.07. That's more than a full run worse than the National League average, and ranks 15th in the NL, ahead only of woeful Washington, at 5.43. So the two teams with the worst records have the worst bullpen ERAs, while the best number belongs to Los Angeles, who also have the best record in the majors. Case closed. The bullpen do suck, and are a large part of the season we're last in the division.

Hang on... There's something odd here; despite that ERA, they actually have a winning record, at 10-9. Only nine of the team's 39 losses are credited to them, a number bettered by just four teams in the National League. Now, while wins may be a poor way to judge a pitcher, it seems that losses for a bullpen are of some importance - those indicate games where they took over with a lead or when the score was tied, and yet the opposition ended up victorious. Despite what it feels, that hasn't happened to the Diamondbacks particularly much this year. We have sixteen blown leads, compared to fourteen comeback wins - the major-league average for both is fifteen.

The 2009 bullpen has just not been part of the outcome in very many games: just 19 times. Thus far, relievers have thrown 35% of the innings in the NL, and been involved in 32% of the decisions. Being a little less makes sense, since inertia has to be overcome: in most cases when the starter leaves, unless 'something' happens, they will get the W or L. But in Arizona's case, the bullpen has been involved in 28% of decisions - and usually in a positive way. I also note that last year at this point, they had more losses and a worse overall record, at 7-11.

In contrast, we can look at the rotation, who have gone 19-30, a sharp reverse from the 30-20 record at the same stage in 2008. Now, while some of those have been due to poor run support, the majority of defeats (17) have come when the starter had an ERA on the day above seven, which doesn't seem an acceptable level of performance. Doug Davis has had five such losses, Jon Garland four, and the triple-headed Beast of Webb Replacement "Yusmilly Augucknit", six of those defeats. The impact of our ace's injury bites us once again. 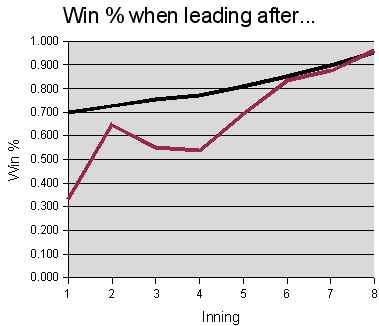 This is interesting data, and shows that from the sixth inning on, the Diamondbacks are losing leads at almost exactly the same rate as an average team in the major-leagues. Specifially, after six, the team that's ahead wins 85.2% of the time; the Diamondbacks 83.3%. When leading after seven, the same numbers are 89.7% and 87.5%; and after the eighth inning, Arizona are actually better. We are 24-1 there, a 96% rate, compared to the MLB average of 95.2%.The only ninth-inning lead we've blown, that actually cost us the game, was the one where San Diego came back from 7-1 down, to tie it in the ninth and win it in ten.

Where the Diamondbacks are much worse at defending leads than average, is when they have an early advantage. It's interesting - and somewhat surprising - to note that overall, a team that has the lead after the first inning already has a 70% chance of being the eventual victor. This is definitely not the case for Arizona, however, who are only 4-8 when they jump ahead in the opening frame. Similarly, even when leading at the end of the fourth, we're barely above .500 at 14-12, compared to the average of 77%. Here are the details of all nine losses credited to the bullpen this season

It appears, all told, that the bullpen has "cost" the team only six victories, with the other three being level [and so up for grabs] when they entered. Admittedly, this discounts games like the 18-inning contest, where the bullpen was both awful, conceding five runs in the ninth, and brilliant, then no-hitting the Padres for the nine innings which followed that], because the team won in the end. What's interesting - and perhaps magnifies the sense of relief corps suckage - is the scale of the losses. Most of these blown leads weren't close: we've wasted margins of six, five, four and (twice) three runs. It almost seems we are better at defending small leads.

Not that there isn't room for improvement. The main issue for the team, and particularly the bullpen, is allowing too many 'big innings', where we let the opponent put up four, five or even six runs. We lead the league in those, 23 this season. It's the sixth that has proved most troublesome, with five such games - all told, we've conceded 57 runs there, which works out at above 7.5 per nine innings, and is more than in the first and second combined. Even if we don't actually blow the entire lead there, such an implosion will make even a comfortable margin a great deal less secure for the remaining three frames.

A particular area of concern is inherited runners. 42% of them score on the Diamondbacks, most in the league. This would tie in with the big inning: one pitcher can't get it done, so the next has to clean up the mess and fails to do so. Curiously, this aspect of the game has become much worse under AJ Hinch. In the first 29 games, with Melvin in charge, the rate was only 31%, right around league average [32% at the present time]. However, in the 39 Hinch-led games, the number has shot up to an astonishing 51%, and in the 17 games so far this month, it's 60% (twelve of twenty).

Random luck? Poor choice of bullpen pitchers? I leave the interpretation to you, though it'd take more analysis, since situations vary. You can inherit a runner on third with no outs, or one on first with two outs - letting the former come home is a much smaller sin than the latter. Still, particularly bad in this aspect is Zavada, who has somehow managed to maintain a 0.00 ERA, while letting eight of nine inherited runners score. Gutierrez and Jon Rauch are also above 40%; Pena and Schoeneweis are the sole members of the current 'pen below league-average, with the latter only having one outing where he let them score. However, more than three-quarters of his 22 appearances have involved two outs or less, reducing the chance for this to happen.

All told, I'd say the evidence is that the bullpen are indeed significantly worse than average, but do not seem to have had very much impact on the overall won-lost record of the Arizona Diamondbacks. This again may be a result of luck or management - it doesn't matter too much if the bullpen gives up late runs in a blowout game e.g. the two wins over the Royals. There is some data to support this, with opponents hitting .277 off our pitchers when the margin is more than four runs, compared to .264 overall. However, I doubt this conclusion will come as much comfort to Diamondbacks' fans, who will continue to reach for the Rolaids every time a lead is turned over from a starting pitcher.