Share All sharing options for: Diamondbacks 3, Mariners 7: Arizona are sub-Mariners once again

The visiting team did at least manage to keep themselves in this for the majority of the game - they were tied at two, as late as the middle of the seventh, after Justin Upton's thirteenth homer of the season. However, Billy Buckner allowed the first two runners in the bottom half to reach base. The second might have been a double-play, had Buckner not made a reflex grab for the ball, diverting it beautifully - from the Seattle POV, anyway - far enough to end up with men on the corners.

He was relieved by Clay Zavada, but he hit the first man he faced on a full-count, to load the bases for Seattle with no-one out - while the Mustached Marvel got a comebacker to force one out at the plate,  he was replaced by Juan Gutierrezm and a sacrifice fly and single made it 4-2 to Seattle. I am somewhat confused by the box-score, since it looks like Zavada's zero ERA remained intact, with both runs charged to Buckner, even though the batter Zavada hit - Branyan - came around to score. Not sure how that works.

However, inevitably, it was once again the eighth inning where the Mariners really took control. scoring three more runs. Blaine Boyer allowed the first four batters he faced to reach base, albeit helped by an error from Ryan Roberts at third. By the time he got a double-play, it was too late: Seattle had already scored a couple, and a third came home on the double-play. Justin Upton drove in a consolation run with his third hit of the night in the ninth, and we got the tying run to the on-deck circle before Miguel Montero fouled out to end the game.

The Diamondbacks managed a total of only four hits - as noted, three of those were by Upton, with the only other one a single by Felipe Lopez to lead off the game. After that, 17 straight Arizona batters were retired, before Upton's homer leading off the seventh. Lopez did give us the lead, scoring on what has to go down as one of the more unusual play descriptions I've seen: "M. Reynolds popped out to catcher, F. Lopez scored, J. Upton to second on catcher R. Johnson's throwing error." Believe Upton tried to steal second, and the catcher's throw sailed into center field, allowing the runner to get home from third.

Buckner wasn't bad: not as good as his previous two starts on the road, but a damn sight better than his games at Chase. He got stung by the two runs on his account after he left the game, although nine hits and two walks is still too many baserunners for a six-inning outing. It's probably good enough to get him another outing, although that will be an acid test, since it'll be back in Phoenix, where Buckner goes to die. His final line, four runs over six innings, though he did strike out seven batters. Finally, an update on Seattle's Endy Chavez: he suffered a torn ACL, will undergo surgery and miss the rest of the season. Ouch. 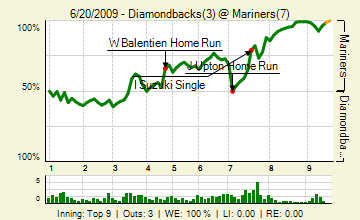 And after the game a couple of days ago, where almost everyone was in positive territory, the reverse was true tonight. The only other man with a plus in front of his number was Clay Zavada at +5.6%, for the one out he recorded. No-one else managed to break zero. Output was equally limited in the GDT with 128 comments: I can hardly complain, being responsible for exactly none of them. There also seemed to be some technical issues, which didn't help matters: these now seem to be resolved, from what I can tell, but let me know if it's otherwise. hotclaws led the way, with soco in second. Also present: gasgarza, unnamedDBacksfan, TwinnerA, kishi, Muu, Sprankton, Diamondhacks, katers, TheDBackFan and AJforAZ - I think the discussion about confusing Ryan Roberts and Chris Young is one for the SnakePit Hall of Infamy...

Tomorrow, we try to avoid the sweep against Seattle, though facing King Felix won't be easy - it's been almost eight years since we beat the Mariners, going back to July 16, 2001. Curiously, the winning pitcher for Arizona that day was Miguel Batista - who got the W in relief for Seattle during the opener of this series. Of the 16 players used by the Diamondbacks that day, only three are still active in the majors - Batista, Craig Counsell and David Dellucci.