Sigh... Stop me if you've heard this one before.

Coming into the eighth, Arizona had a three-run lead, thanks to seven innings of occasionally nerve-wracking, but occasionally equally-dominant, and in the end, shutout pitching from Jon Garland. However, Scott Schoeneweis came in and allowed a lead-off home-run to make it 3-1. He was immediately yanked and Tony Peña brought in, but he gave up a single to the first batter he faced. He did get the next two batters - then Ken Griffey, Jr came up as a pinch-hitter, making the crowd at Safeco go berserk.

And with good reason, as Griffey torched the first pitch, into the left-center bleachers, for the 618th home-run of his career. An obviously-rattled Peña surrendered a single and the go-ahead triple, before finally getting the third out. However, it was too late: the lead was gone as, for the twenty-third time this season Arizona had allowed four runs or more in a single inning. That's the most in the National League, even more than Washington. It's been the death of this team, and the majority of those "crooked numbers" have come from the sixth inning on. Arizona are now only 18-8 in games where they are leading after five - a win rate of 69%, compared to the MLB average of 81%.

In some ways, it was perhaps the baseball gods paying us back, for this was not a game that the Diamondbacks really deserved to win. We were outhit by the Mariners, 12-5, and there was more than a little umpiric goodwill on a couple of the runs we did score. In the third, after a Ryan Roberts walk and a Felipe Lopez single, Stephen Drew attempted to put down a bunt. He succeeded, but the throw to first by the pitcher appeared to glance off Drew as he ran inside the base-line - what should perhaps have been interference, turned into men on second and third with a run in, and still nobody out.

We couldn't take much more advantage - one run scored on a groundout by Upton, Gerardo Parra then hit into an inning-ending double play. In the light of what eventually transpired, that failure would prove crucial. While we added a third run on a solo homer by Miguel Montero in the fourth, that was the only man we would have in scoring position, until Eric Byrnes advanced to second on a wild-pitch with two outs in the top of the ninth. However, Montero struck out - as had Parra and Tony Clark previously against the Mariners' closer - and the Diamondbacks lost another game they should have won.

Poor Jon Garland - like most of the rotation, he should be getting used to it by now. It's the 21st time this year that an Arizona starter has allowed one run or less. However, such outings have led to only eleven wins for the pitcher in question, because the team record in such games is a mere 12-9. Garland tonight did what we wanted him to in the area of walks, allowing only one in seven innings, though he did have his wobbly moments, especially early on. The Mariners had men on second and third with one out in the opening frame, although a line-drive to Roberts and a strike-out neutralized the threat.

The question would inevitably have to be asked: should Garland have been pulled or left out there for the eighth? Hindsight is, inevitably, 20/20 (and he certainly couldn't have done much worse than Schoeneweis and Peña), yet our starter had thrown only 102 pitches and had also retired Seattle in order during the seventh, ending with a sweet strikeout of Ichiro. You would have to ask Garland how he felt, however: he has gone further than 102 pitches this year, just not all that many further (115 is the season-high), and not all pitches are necessarily equal.

Couple of notes from the Mariners side. The win went to beloved former Diamondback [and occasional author], Miguel Batista - the forgotten pitcher from Game 7 of the 2001 World Series, though that's probably because he faced (and retired) one batter on one pitch. There was also a grim moment when they lost left-fielder Endy Chavez in a brutal collision with their shortstop, as both chased a Lopez bloop. While the ball was caught, Chavez's knee took the full brunt of the impact, and he was wheeled off the field in obvious pain. Never nice to see: I fear that's a DL stint, and I hope he makes a full recovery. Indeed, he may well be back before we Diamondbacks fans have fully recovered from this one... 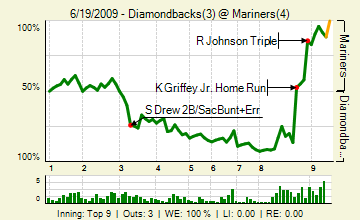 And in case you're wondering, that was a 92.6% chance of victory for the Diamondbacks at the end of the seventh inning. Not that this was the worst of the day, dear me, no. That one belongs to the Cleveland Indians, who blew a 7-0 lead against the Cubs, along with a 98.2% Win Probability after seven frames. Not sure there's much difference in the pain the two sets of fans must be feeling, however. 192 comments: you can imagine what most of the later ones were like. 'Skins was the only person to pass fifty, with pygalgia in second place. Also present: soco, TwinnerA, gasgarza, unnamedDBacksfan, hotclaws, emilylovesthedbacks, katers, Diamondhacks, Sprankton, PLU Tim, Zephon, Scrbl, westofrome and Wailord.

Some other bits of D-backs news. The team agreed to terms with first-round pick AJ Pollock, on a deal supposed to include a $1.4m bonus. Tony Clark finished his rehab assignment and started up right where he left off - that would be 0-for-3 with a pair of strikeouts. He naturally replaces Josh Whitesell on the roster, despite the rookie hitting .300 during his second stint in the majors. Guess he just doesn't have the veteran presence of Clark... To add further to the log-jam shortly, Chad Tracy began his rehab assignment with the Aces, so imagine he'll be returning to the roster during the next home-stand.

Both Chrises - Snyder and Young - were out of the line-up tonight, with back and groin issues respectively; the former was available off the bench, and the latter could be in the same boat tomorrow, though might be given the day off then too. Less good news on the Brandon Webb front - as mentioned in the GDT, they'll be giving him an MRI to see whether surgery is necessary. According to the Republic, "The original diagnosis was a strained...muscle outside the shoulder joint, but with Webb continuing to experience stiffness and soreness, more tests are being done to determine whether there are problems with his rotator cuff or labrum." That could mean an operation, and may cost Webb a good deal more than the rest of this season. Can this year get any better?