Share All sharing options for: Diamondbacks 3, Dodgers 2: We Don't Need Another Zero...

Tony Peña. Set-up man par excellence - closer, not so much... He came into this game with a sparkling 1.85 ERA, but the save opportunities had gone to others, mostly Chad Qualls. However, with Qualls unavailable tonight, due to forearm tightness [not seen as serious, and he should be back and available tomorrow], it was to him AJ Hinch turned to preserve a three-run lead. And Peña had allowed a total of three runs in his previous 17.2 innings, going all the way back to April 21. Shouldn't be an issue, should it?

Two runs and with the tying run on third-base later, a fly-ball was finally lifted to left-field, and Peña became the fourth Diamondback this season to notch a save. It wasn't pretty, however. He got the first out easily enough, striking out Martin, but then allowed a single, and an error by Felipe Lopez, trying to turn a game-ending double-play before he'd even got the ball in his glove, put men on first and third. Another single ended the shutout, and put the tying run on base. A fly-ball to Parra in left provided welcome relief, though the Parrazooka fired back to second had my heart in my mouth. Another single made it 3-2: basically Peña came as close as you can get to blowing a three-run save opportunity, without actually doing so.

Daron Sutton was wondering if Peña actually has what it takes to be a good closer, pointing out that his ERA in save situations coming into this game was over eight having allowed thirteen runs in 13.2 innings, and converted only six of those fourteen opportunities. Obviously, the ERA has got worse - 9.20 - but it is worth pointing out that the majority of the fifteen earned runs, did come in two outings totaling one inning, where he allowed five and three respectively. In the other thirteen save situations, even including tonight, his ERA is 4.61. Still high, but not irredeemable. Still, I think we'll be glad to see Qualls back.

Starting pitcher Billy Buckner was there to greet him after the game with high-fives, although one would forgive our spot starter if he'd kept a set of brass-knuckles in his pocket, for use had the de facto closer blown it. Because Buckner was brilliant. You'd probably not have had him down as the man to shut down the best team in the majors for six innings, but he did just that, and has now allowed one earned run over 13.1 innings in his two road starts. I imagine he and Jon Garland will be anxiously scanning the calendar to work out where their next outing is scheduled to take place.

Twice, in consecutive innings, the Dodgers led off with a double, but failed to break through, and the key to Buckner was getting ahead of the hitters with strike one, which he did relentlessly. While he doesn't have overpowering 'stuff', this allows him to use his whole arsenal, and in particular, generate the ground-balls which are important to his success. Only three of the eighteen outs he recorded came in the air, and he dialed up a key double-play after Pierre singled to lead off the sixth. It was especially vital, as he walked the next two batters, but then got Russell Martin with three consecutive breaking balls to end his night at 92 pitches, having allowed four hits and struck out five.

The Diamondbacks broke through first against a wobbly-looking Kuroda in the second. He allowed a lead-off double to Stephen Drew, but then picked our short-stop off second. I'm not saying Drew had fallen asleep, but I imagine Kuroda noticed the pajamas and bottle of NyQuil Drew had taken out of his pocket. However, walks to Reynolds and Montero put men back in scoring position. After the semi-inevitable strikeout by Chris Young, Josh Whitesell drove in his first runs as a Diamondback in 2009, in his 29th at-bat, with a double to the wall in right-field, that scored both walks.

It was a long time until we had anyone else in scoring position - the seventh inning, to be precise and in the meantime, only left one man on base. However, then the wildness started for the Dodgers, as their relief corps uncorked a total of five wild pitches in the seventh and eighth innings, including two on third strikes that allowed Montero and Drew to reach base. The Dodgers escaped with the bases loaded in the seventh, but the added bases allowed Arizona to get what turned out to be a crucial third run in the eighth, on an RBI groundout from Reynolds. [Five WP is the most in an NL contest in over six years, since the Padres on April 29, 2003, though the D-backs did it against the Angels on June 25th, 2006.]

Arizona managed only five hits in total, two of them for Stephen Drew, while Josh Whitesell had the vital two-run double and a walk. As noted in the thread, I would like to request the return of the old Justin Upton - it didn't seem like the day off yesterday helped much, as he was 0-for-4 tonight, and is 0-for-12 with five strikeouts and two GIDPs since Friday. Chris Young was also 0-for-4 with a couple of K's, reducing his road average to a startling .088, having gone 5-for-57 this year. His average is exactly where it was on May 4, at .174, so it doesn't seem like any breakthrough has happened.

This was a satisfying victory in the end - it's been a long time since we last beat Los Angeles in Chavez Ravine. August 1st last year, to be exact, since when we'd gone 0-7 and been outscored 13-42. We still haven't scored more than three runs at Dodger Stadium in over a year [April 24, 2008 was the previous occasion, eleven games ago], but with our #7 starter taking the mound, it's got to count as a bonus victory. With Dan Haren going tomorrow against Randy Wolf, we've got to feel we have a good chance to take the series - and can then go for the sweep Wednesday. Let's not get too far ahead of ourselves, however... 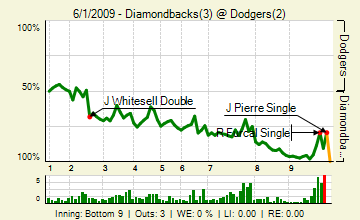 I almost forgot to mention Gutierrez, who came in with one out in the seventh, and the tying run at the plate, and got out of that, then went through the Dodgers 1-2-3 in the eighth with impeccable stuff. On yet another night when we were a little short-handed in the 'pen, this was a very necessary performance. I should also praise Mark Reynolds, who took away a pair of likely extra-base hits from Russell Martin, with great grabs down the third-base line and then, after moving to first, dived to stop an errant pickoff throw from Gutierrez.

Almost 500 comments, not too bad: 'Skins led the way ahead of kishi and luckycc, who tied for second-place. Also present: sayheyupton, snakecharmer, Brendan Scolari, 4 Corners Fan, TwinnerA, Azreous, jaydubsped, Scrbl, ASUJon, Diamondhacks, mrssoco, hotclaws, katers, IHateSouthBend, jazzbo13, chem, unnamedDBacksfan, pierzynskirules and Turambar. Thanks to all of those for their participation, on a day where we were the only NL West team to taste victory. Here's to more of the same tomorrow. And below, please find the poll on who was the team's player of the month for May.