Share All sharing options for: Diamondbacks 12, Royals 5: "Business as usual" - we certainly hope

After last night's miserable performance, the Diamondbacks headed into the second game of their series with the Royals with nowhere to go but up. No, this isn't really going to work. Though the score was exactly the same as last night, and there were some startling similarities [the Royals making it more respectable by putting up a three-spot in the ninth during both], I really can't simply just cut and paste Azreous's sterling recap - much though it would certainly make my life easier. However, one sentence from the opening paragraph yesterday remains true: "The D-backs destroyed the Royals in today's game in just about every possible way."

Arizona reached a dozen runs in consecutive road contests, for the first time ever in franchise history - they'd only done it once at home, against the Brewers all the way back on September 26-27, 2001, winning 15-9 and 13-11. Needless to say, conceding ten runs over two games is a considerable improvement on the pitching side over twenty - and it'd have been less than that, save for a worrying ninth-inning from Chad Qualls, who continues to struggle. He allowed three hits and three runs, two earned, in his inning and it could have been worse except for a fortuitous line double-play which ended the game.

Otherwise, however, this was a triumph. I’m making a note here, "Huge success" - it’s hard to overstate my satisfaction... :-) Chris Young stole a base - but more importantly, had four hits, three of them for extra bases, and his long, nightmarish crawl back to a batting average that begins with a .2 has finally reached its goal - the last time he was there was back in April. At the end of the last Dodgers series he was hitting .172; in the two weeks since, Chris has batted .319/.448/.681, with more walks than strikeouts (11:10).

While there's still work to be done, it really does look like Young has turned the corner, but we'd better hope AJ Hinch had a certain fan's number on speed-dial, in case some more impromptu affection is needed by our center-fielder. A slightly-worrying note, in that Young was pulled from the game after his last triple, although it may just have been something like cramp - he left under his own steam. He wasn't the only one with his hitting boots on. Actually, it's probably quicker to say who didn't: Mark Reynolds, who had an eminently forgettable day, going 0-for-6 and commiting an error.

Everyone else had a hit - and in some cases, a lot more. Justin Upton reached four times, on a walk and three hits. Gerardo Parra homered and tripled. Eric Byrnes homered and singles. Miguel Montero had a pair of hits. Felipe Lopez and Stephen Drew each had a hit and a walk. Is that everyone? I think so, except for Augie Ojeda, who singled, and Ryan Roberts, who came in as a late-inning replacement. Sixteen hits, and twenty-four base-runners in total, thanks to four walks, three errors from the Royals and a dropped third-strike which allowed Lopez to reach first-base.

Outside of the ongoing Qualls for concern, the pitching was perfectly solid. Dan Haren cruised through seven innings on 98 pitches, though allowed a few more hits than usual (seven) - still, he walked none and struck out six. The only damage was a one-out double in the third that scored two runs, and he struck out the next two Royals' batters to end that threat. However, the Diamondbacks were five runs ahead when that happened, and after a scoreless fourth, they added three more runs in the fifth to make the score 8-2, and more or less end this as a competive contest. Clay Zavada wobbled a bit in the eighth, allowing two hits and a walk: a double-play helped him extend his scoreless streak to 12.1 innings and 13 games.

And remember the weeping and wailing at not resigning Juan Cruz this winter? He came in for some mop-up work, and allowed two runs on four hits and a walk over two innings, including a home-run to Gerardo Parra. Worth looking at Cruz's stats this season, which are not very impressive so far. His ERA is a lackluster 5.67, the walks are up [5.7, compared to a career figure of 4.7 BB/9] and the strikeouts well down. Over 2007-2008, he struck out 12.62 per nine innings; this season, it's exactly six, less than half as many. The only K of the ten Diamondbacks he faced today was Reynolds, which hardly counts - looks like letting him go may have been a good call. 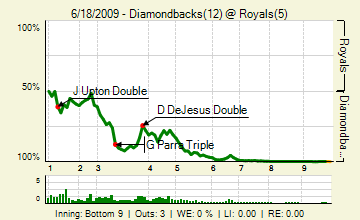 In case you're wondering how Mark Reynolds 0-for-6 day didn't merit anything negative, he reached on an error and a failed fielder's choice, which scored him +7.9%, and countered the negative impact of his other at-bats. Eric Byrnes (-1.3%) was the only other Diamondback in sub-zero territory - I think having just two negative players, totalling minus four percent, must be close to the best the team has ever managed. 238 comments, with hotclaws leading the way and pygalgia the runner-up. Also present: bcloirao, frienetic, Diamondhacks, Brendan Scolari, kishi, Wailord, unnamedDBacksfan, snakecharmer, Scrbl and soco.

If something feels strange tonight, that's because it's the first time since August 15-16 last year - 106 games - the Diamondbacks have won back-to-back contests without a save situation in either of them. In the light of that, as well as the 24 runs on 31 hits, a curiously pessimistic opening sentence from Nick Piecoro: "The Diamondbacks won a game on Thursday but their season continued to spiral out of control." He seems to think the injury to Young may be more serious, though also notes the set-back to Brandon Webb today - however, that feels more a continuation of 'business as usual,' 2009-style, than anything new.

Webb's scheduled bullpen was canceled today, with the pitcher instead returning to Phoenix - he was seen leaving the stadium before the game. Josh Byrnes said Webb "didn't feel good," and so the team canceled what was planned to be his first session throwing off a mound. No more details at this point of where things might go from here, but I'd not be surprised if Webb is gone until after the All-Star break, at least. Chris Snyder was also a late scratch from the line-up today, due to some back stiffness, but should hopefully be back tomorrow. Scheduled DH Montero took over behind the plate, with Byrnes getting the DH spot instead.

On to Seattle, with this series won - something that looked pretty unlikely after getting shutout in the opener. We'll see what the back-end of our rotation can do against the Mariners.