After last night's miserable performance, the Diamondbacks headed into the second game of their series with the Royals with nowhere to go but up. Below-average offensive performance? Great! Defense better than a little leaguer? Fantastic! But instead of merely passing over the bar, the D-backs destroyed the Royals in today's game in just about every possible way.

It was a great matchup of youngsters on the mound. Zach Grienke's been arguably the second-best pitcher in the American League to this point, with a sub-2 ERA coming in. On the bump for Arizona was the phenom Max Scherzer, who pitched into the eighth his last time out and had great stuff. But instead of a pitcher's duel, the Diamondbacks' offense was the star attraction today.

Things didn't get off to the best of starts. In the bottom of the first, Scherzer got a quick flyout and strikeout to begin the inning, but couldn't seem to get that last out. He walked Billy Butler and gave up a base hit to yesterday's killer, Mike Jacobs. Fortunately, "fleet of foot" isn't one of the phrases you would use to describe Jacobs, so Jose Guillen's double only scored one run, and Scherzer got out of the jam.

In yesterday's game, one run would have been more than enough to guarantee an Arizona loss, but not so today. They evened the score against Grienke in the next inning, using a Chris Young walk and Miguel Montero double to set up a Chris Snyder sac fly -- a little bizarre to see those two hitting back-to-back in the order, but such is the joy of interleague play. In the fourth, Reynolds started the inning with a strikeout (more on that later), but the next four D-backs reached (single, walk, single, fielder's choice), getting three runs across on a mixture of good offense and abysmal defense by the Royals. Grienke ultimately struck out the side and only one of the runs was earned, but it was still a 4-1 ballgame in favor of the good guys.

Scherzer's outing was full of baserunners and tight spots, but he managed to navigate all of the landmines with minimal explosions. After the first, it went something like this:

Twelve men on base in six innings, but still a quality start with just two runs charged to Mad Max. He struck out five and is now 4-1 in his last seven starts, after waiting so long to get his first big league win. He left nursing a slim 4-2 lead, but this time the offense made sure the bullpen couldn't blow an easy victory.

In the seventh, Stephen Drew (who continues to swing a hot bat right now) doubled with one out, and after a Justin Upton foulout, Reynolds connected for his 18th homer of the year into the seats in left. Special K was ultimately 1-for-4 with the homer and three strikeouts to go with it, which kinda feels like a microcosm of what we expect from him. That homer chased Grienke, who failed to make it through the seventh for just the fifth time in 14 starts -- and only the second time he had given up more than three earned runs.

But the floodgates really opened up in the eighth, once Grienke was tucked away in the dugout. Chris Young walked to lead things off, and Montero flew out. However, that started a run of five consecutive hits for Arizona -- Snyder singled, Josh Whitesell drove in Young with a base hit, Felipe Lopez slapped a knock to left to load the bases, Drew unloaded them with a triple, and Upton brought Drew home with a single of his own. Suddenly a five spot was on the scoreboard and a reasonably close game was a blowout. For good measure, the Diamondbacks tacked on one more run in the ninth -- after consecutive singles by Young and Montero, Snyder grounded into what should have been a double play, but our old buddy Alberto Callaspo threw the ball away on the turn and Young came around to score.

It'd be nice to say that the game simply ended there without any further damage, but after solid appearances by Scott Schoeneweis and Jon Rauch, the wheels continued to fall off of the bus for Juan Gutierrez. He labored through a 27-pitch inning, giving up three earned runs for the third consecutive outing. Five Royals reached base, and we can only be thankful that the game was completely out of reach by that point. Gutierrez's ERA was 3.92 on May 19, and an effective two-week span had lowered that to 2.90, but after the past three abysmal showings, it's all the way up to 5.13. Overuse (at least recently) isn't the issue here -- those three appearances have spanned 11 days.

Still, a 12-5 victory for our side, and although I wouldn't call the game "interesting," I certainly can't argue with the result. 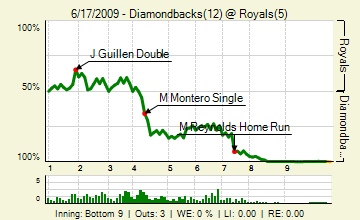 None of our pitchers were in the negative for win expectancy -- yes, even Gutierrez, because apparanetly no team has ever blown a 12-2 lead before. We had a 100% WE with one out in the eighth, which is an acceptable time for Jon Rauch to be on the mound, I'd wager.

All kinds of success across the order, which is to be expected with 15 hits. Upton and Montero each had three hits. Drew and Snyder had a pair of hits apiece (the former also drove in three runs). Whitesell reached on a base hit and a walk, and Chris Young had the strangest line of all -- 1-for-2 with four runs scored, thanks to three walks. He had 16 walks in his 63 games coming into today. Every starter had at least one hit. For the Royals, Guillen had three hits and a walk, Maier had three knocks, and Butler and Jacobs each reached three times on two hits and a base on balls. Everyone who came out of their bullpen gave up at least one run, although Kyle Farnsworth's black mark in the ninth was unearned.

Another quiet GameDay Thread, which I suppose is to be expected given this team's performance through the first two months. Just snuck over 200 comments. Kishi just broke the 50 barrier and was the leading poster, with hotclaws right on his heels. The roll call: kishi, hotclaws, dima1109, pygalgia, unnamedDBacksfan, sergey606, TwinnerA, Diamondhacks, Jim McLennan, emilylovesthedbacks, Sprankton and soco.

As of press time, the Dodgers were down by a run in the ninth. The Giants and Padres lost, so we could gain ground on just about everybody if it all plays out. Series finale tomorrow, with our old buddy Dan Haren on the mound against Luke Hochevar and his 5.6 ERA. In other words, we're probably screwed.