To start by repeating something I said in the Gameday Thread, Billy Buckner is not the answer, or if he is, we probably don’t want to be asking the question. At the very least, we need a restraining order barring Buckner from 500 feet of the pitcher’s mound at Chase - which, by coincidence, is about where Lance Berkman’s first-inning homer landed., that gave Houston a 3-0 lead. [Didn't we learn anything from pitching to Berkman with Tejada on second and first-base open yesterday?] Because here are Buckner's career numbers at Chase Field, after today's third straight start allowing six or more earned runs here:
Buckner: 26 IP, 40 H, 8 BB, 9 HR, 29 ER, ERA 10.04

This compares to an ERA of 3.76 over 55 innings, at every other park in the majors. While some of it is probably small sample-size and some of it bad-luck - Buckner's BABIP at Chase coming in to today's game was .424 - the home-run rate isn't, and in Phoenix that's a startling 3.12 per 9 IP. Even long-ball machine Yusmeiro Petit has only allowed them at a 1.88 pace when pitching here. Buckner's next start will be on the road, next Saturday in Seattle, but the one after that will be back in Arizona - Petit should be available then, and we might want to think about which of these doubtful options will give the Diamondbacks the best results.

The other part of the problem today, outside of the two home-runs, was Buckner's control, as he allowed three walks in five innings, all of which ended up scoring for the Astros. A couple of those came in the sixth inning, as he loaded the bases with no-one out before getting pulled. Blaine Boyer came in to replace him, and allowed all three inherited runners to score. That has certainly been part of the problem for the Diamondbacks' bullpen: they have allowed 44% of them to cross home-plate, the worst figure in the NL [league average is only 32%]. Jon Rauch also struggled in the eighth, allowing two runs on two singles, with the aid of a couple of stolen-bases and a wild pitch.

Offensively, the Diamondbacks never came closer than one, though got there on a couple of occasions. After the three-run Houston top of the first, Stephen Drew had a two-run shot to get us right back in the game in the bottom of the same inning. And in the second, we almost tied it up, from a surprising source, Buckner hitting a double with Snyder on first. However, in echoes of the problems the team had last season, Chip Hale windmilled Snyder around third and he was nailed at the plate for the final out. It was one of those cases where it did take a competent relay throw by the Astros, but their starter, Moehler, was teetering on the ropes at that point and we'd have had the top of the order up.

To bring home that point, Felipe Lopez singled to lead off the third for Arizona - which would probably have scored two runs, if Snyder had been held and he'd got to the plate in the second. Instead, we had to wait for a lead-off home in the fourth from Reynolds - he was clearly feeling no ill-effects from getting plunked on the knuckles of his glove hand yesterday. He had two hits, while Byrnes had a hit and a walk, but outside that and Drew's homer, it was a lack-luster afternoon for the offense. 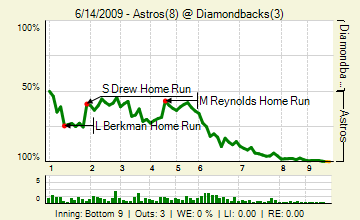 A few more people and about twice as many comments in the thread today, though enthusiasm was hard to sustain after Buckner loaded the bases with no-one out in the fifth. DbacksSkins led the way, though even he ended up short of three figures. Also present were snakecharmer, AJforAZ, emilylovesthedbacks, gasgarza, TwinnerA, hotclaws, AZBOMBERS, acidtongue, Scrbl and kishi.

And so after the off-day tomorrow, it's on the road again for the Diamondbacks, this time doing the American League thing in Kansas City and Seattle, with all the joys of the DH. AJ Hinch said he plans to "play the hot hand" there, and will also use the change to semi-rest a couple of the everyday players, such as Drew, Reynolds, Upton, while still retaining their bats. We may see Tony Clark in Seattle next weekend - and our other rehabbing first baseman, Chad Tracy, will also be in that neck of the woods, as he'll probably be on a rehab assignment with the Aces, and they're playing in Tacoma next weekend.

The Diamondbacks signed another draft pick; second-round selection and #64 overall, outfielder Matt Krause, who was at the park before the game and took batting practice with the team. He batted .402 and hit 27 home-runs - the latter number set a single-season school record at Ohio University and were the third most in the country. He is some audio clippage from him, as well as Hinch on the disappointing home-stand and Buckner on his problems today.