Diamondbacks 4, Astros 6: Houston, we have a (bullpen) problem...

Share All sharing options for: Diamondbacks 4, Astros 6: Houston, we have a (bullpen) problem...

This will not be one of my finer or more detailed recaps. I got five and a half hours of sleep last night. It's already approaching midnight. And I didn't actually see a single pitch of the game, spending the evening watching tattooed women with names like Kamikaze Kiwi whizz around on skates, occasionally pausing to beat each other up. All told, looking at the box-score and over the chilly wasteland which was the Gameday Thread, I think our choice of entertainment was the better one.

Jon Garland didn't pitch badly: in particular, he only allowed one walk in seven innings of work, However, on a night when Roy Oswalt was firmly in control, the three runs Garland allowed was enough to get him tagged with his seventh loss of the year. All of those came in the sixth, after he'd pitched very credibly and economically through the front five, shutting out Houston and clinging on to the one-run lead provided courtesy of Chris Young's solo homer in the fourth. A lead-off triple came home with one out on Miguel Tejada's 2,000th hit, and after a ground-out moved Tejada to second, a meeting on the mound decided to pitch to Lance Berkman rather than Ivan Rodriguez.

We were listening on the radio at that point, and it seemed an odd decision. Straight up, Berkman has an OPS of .866 this year; while Rodriguez's is 175 points less. Berkman is also a left-hander, giving him a platoon advantage against Garland too. All told, in a tied game with two out, I'd have walked Lance and taken my chance with I-Rod. Hinch disagreed, and Berkman smacked the 300th home-run of his career, a two-run shot which gave the Astros a lead they would not relinquish [though they almost did, we'll get to that shortly]. Said Garland, "I felt comfortable going after him right there. I don't know what to say about it. Shit happens." Yes, it did, didn't it?

Hopes of a comeback dimmed even further in the eighth, as Juan Gutierrez's recent struggles continued, allowing three earned runs for the second consecutive outing. As a result, in 1.1 innings of work, his season ERA has increased from 2.90 to 4.45. One wonders if perhaps a lack of work is the problem for him: he's only been used three times in the past twelve days, and seemed to be at his best in April and May when he was working on one or two days' rest almost the entire time. Perhaps learning from Garland's mistake, he intentionally walked Berkman - only, of course, for Rodriguez to burn him with a hit. Sometimes, you just can't win... Fortunately, the Astros sent the Huge Manatee to the mound as a pinch-hitter for Oswalt, and Gutierrez retired Russ Ortiz for the third out. Still, I may be happier seeing the Blowfish out there in close games right now.

With the game now seemingly out of reach, the offense finally swanned in, bearing a six-pack and wondering what time the party was going to get started. Oh, they'd almost shown up a couple of times before, loading the bases in both the second and third innings, but those opportunities proved fleeting and illusory. However, the eighth was the real deal, as Mark Reynolds doubled home two runs, and was then driven in himself by Josh Whitesell. But that was it, with pinch-hitter Eric Byrnes popping up to the catcher off the newly-activated Jose Valverde, getting to see a non-save situation first after his return from the DL.

The ninth was most memorable for the return of Scott Schoeneweis to the mound, for the first time since the death of his wife. He retired both batters he faced, and left the mound to a standing ovation from the crowd, but he didn't respond, for reasons which became clear after the game. Schoeneweis said, "I couldn’t look at anybody. I couldn’t acknowledge the crowd. I apologize. You know the old saying, ‘There’s no crying in baseball,’ so I just kept my head down." He also caught the ceremonial first pitch, thrown by his friend and captain of the Coyotes, Shane Doan. Good to have you back, Scott.

Arizona threatened again in the bottom of the ninth, Felipe Lopez singling and Gerardo Parra adding a walk to put the tying run on base with no-one out. However, Justin Upton grounded into a double-play and Stephen Drew went down swinging to end the game. Hard to blame Drew, however: he had three hits, continuing his resurrection over the past three weeks or so. Since his season average sunk to a nadir of .173 on May 22nd, Drew is hitting .329 (27-for-82), and is now up to a much more respectable .255. Lopez had two hits, while Whitesell and Parra each had a hit and a walk. 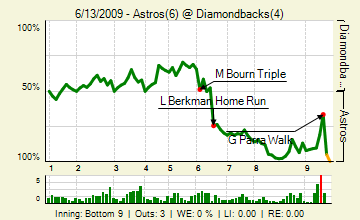 So, you know where I was - where was everyone else? Nine people and 133 comments in the Gameday Thread - and that's including me. Both numbers have got to be lows here for quite some time: one senses hope for and interest in the sseason are proving somewhat hard to sustain. 'charmer led the way, and the few, we (not so) happy few others present were DbacksSkins, hotclaws, TwinnerA, 4 Corners Fan, luckycc, kishi and nargel. Oh, well: Billy Buckner goes for us tomorrow, as we try and take the series. Should be about for that, though we also have some more box-packing to get taken care of.

Lot of cool audio tonight. Garland talking about the home-run; Schoeneweis discussing his return to the mound; Hinch on how Chris Young has improved since getting the impromptu hug; and several clips from supplemental first-round pick Matt Davidson, who signed with the team today. He'll begin his pro career with the Yakima Bears on the 20th, having turned pro rather than go to USC. He says he prefers to play third-base, and said the Diamondbacks were his favorite team, though one suspect that might just be diplomacy, given he's from Yucaipa in California, not exactly prime territory for the franchise!