Dan Haren is the Treasure of the Sierra Madre. He clearly decided tonight that the best way to avoid the fate that befell him last start - the bullpen costing him a win by allowing five runs in the ninth - was to pitch the ninth inning himself. And so, he unveiled a masterful two-hit complete-game performance against the Houston Astros, He walked two, struck out seven and thanks to a couple of cool double-plays, faced only three batters over the minimum, throwing 116 pitches - the only blemish was a solo home-run to Carlos Lee in the fourth.

Otherwise, Haren seemed to get stronger as the night went on, retiring the last eleven Astros faced, and they had exactly one at-bat with runners in scoring position the entire game. That came in the second, and even then, it took a Ryan Roberts error and a stolen-base for this to happen. It solidified his numbers as the best pitcher in the National League this season, when measured by just about everything but victories. Haren's ERA dropped to 2.20, and his WHIP was reduced to 0.82 - there's no-one else who is under one. Starting pitcher for the National League in the All-Star Game? Sounds quite plausible to me.

With a couple of honorable exceptions, the offense took their time to show up, and we were one out away from expanding the village of stranded base-runners in the sixth, when Mark Reynolds uncorked one to left-field. That three-run shot, his 16th of the year, made the margin a good deal more comfortable, expanding it from two runs to five; the solo shot that Chris Young added was merely welcome piling-on. Reynolds had an excellent game, driving in five runs. The homer was his fourth extra-base hit of the night, adding to the doubles he already had, from the first, third and fifth innings. That tied a team record, done five times previously, most recently by Stephen Drew last September, when he hit for the cycle. Reynolds also stole his 13th base

Plenty of hits to go around. Felipe Lopez also had his best showing for a while, with three hits and a walk, while Gerardo Parra had three knocks too, including his first homer since his debut plate appearance, and Young added a double and a walk to his homer. Dare we begin to hope he might be coming out of the slump? That's back-to-back multi-hit games for Young, and since the start of the Padres' season he's 9-for-30, with six of those hits being for extra-bases, and almost as many walks as strikeouts (7:8). Upton had a hit and a walk, but Ryan Roberts dead-cold streak continues: another ohfer leaves him 3-for-24 in June, and we'll probably see Whitesell in the lineup for the rest of the weekend, with Reynolds moving back to third.

Early on, there was no shortage of hits - we just didn't seem able to convert them, or the free passes Mike Hampton was handing out like candy, into runs. In just the first five innings, Arizona had eight hits and five walks, but could only convert those into three runs: Reynolds doubled home two in the first, the ball glancing off the right-fielder's glove, and in the third, he was driven home himself by Chris Young. However, after Lee's blast cut the lead back to two runs, it proved a somewhat nervous couple of innings for us. Arizona left the bases loaded in the fourth, parked another couple in the fifth, and immediately before Reynolds' shot in the sixth, Upton had K'd and Stephen Drew popped out on the infield with two on.

Still, much like a backpacking holiday in Central America, the runs came eventually, and the way Haren was pitching, eight was a great deal more support than he needed. Some discussion as to whether Haren would be sent out there for the ninth, but given what happened last time, one imagines he was clutching the ball like an octopus with rheumatoid arthritis [see, I told you I'd come up with the appropriate metaphor, sooner or later!]. Said Hinch before the game, "I'm not going to make a decision that's bad for him for the sake of any fear of the bullpen. I have complete faith in our bullpen to close it out with a win for him if we need it." Well, that's one of us, anyway... 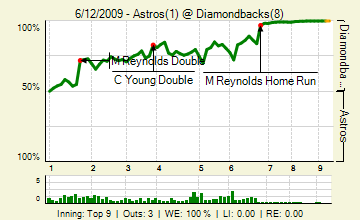 Some interesting stuff from the pre-game worth mentioning. It was "Fundamental Friday" at the ballpark - pitchers went through fielding drills (like in spring training) before batting practice, then position players took fielding and worked on running the bases during batting practice. Hinch was careful to say it was not punishment: "It's a maintenance program that we're instilling in our everyday routine so that we continue to maintain a standard level of defense that we expect," he said.  He also addressed the team getting picked off three times in the last series, and said it was part laziness, part aggression - he said Reynolds got caught yesterday, because he was paying attention to what Upton was doing as they prepared to double-steal. Hinch also joked that Reynolds comes into his office with two gloves and Hinch just points to one or the other...

Felt like a lot more than 283 comments somehow. Oh, well: I had a good chunk, probably because I was the only one here the entire time [in between distractions in the shape of Gothic burlesque models, mini sirloin burgers and cult movie screenings] - TwinnerA just pipped Muu for runner-up. Also present: hotclaws, kishi, Wailord, snakecharmer, soco, 4 Corners Fan, luckycc, Sprankton, emilylovesthedbacks, katers and sergey606.

Dodgers lost! Only thirteen back! Or, more significantly, six back of the Cardinals in the wild-card, albeit with about ten other teams between us and them. Not sure what was most fun today: the Mets losing to the Yankees on a two-out error in the ninth, or Milton Bradley losing track of the game and throwing the ball into the stands with only two down. Comforting to realize other teams are capable of sucking just as hard as us. Ok: two games in a row won by the Diamondbacks. Tomorrow, we see if Jon Garland can give us a quality start and get a proper roll going for Arizona.