Share All sharing options for: Diamondbacks 2, Giants 1: And, exhale...

Phew. Never easy, is it? Max Scherzer was stellar for 7.2 scoreless innings of work against the Giants, but Chad Qualls  - with some help from Mark Reynolds - almost blew it all. Our recently extremely-wobbly closer allowed one run to score and put the tying one on third-base, before finally getting the third out in the ninth inning. Since working two innings in the second game of the double-header against the Marlins on May 20th, here's Chad's line:
Qualls: 9.2 IP, 15 H, 2 BB, 4 K, 8 R, 7 ER, 6.52 ERA
Basically, that's two base-runners per inning [including the one resulting from Mark's error today]; opponents are also batting .357 off Qualls in that time.

It seems he is facing both medical issues, with the forearm stiffness still bothering him, and mechanical ones, which are causing him to leave the ball up in the zone - as noted by the commentators in last night's game. His recent numbers are certainly far too high for Arizona fans to feel comfortable - and if you have been around much lately, you'll know 'comfortable' is the last word you'd use to decribe this bullpen defending a lead. The feeling experienced is more like waiting for medical test results to come back, or when you suddenly spot blue flashing lights in your rear-view mirror. Nothing good can come of it.

Just fortunate that Max Scherzer was on his game today, because he was about the only one on the roster who can sleep the sleep of those fully satisfied with their performance tonight. The hitters certainly can't, failing miserably to capitalize on an opposing starting pitcher, who walked seven Diamondbacks in 5.2 innings. Leading the offensive fail - literally and figuratively - was Ryan Roberts, batting at the top of the order in the absence of Felipe Lopez. Roberts went 0-for-4 with eight men left on base. Not far behind is Reynolds, who in addition to the ninth-inning error, went hitless with three strikeouts, and got picked off first the only time he reached there.

Exempt from this should be Justin Upton, who had two of Arizona's six hits, each time driving in a run - in other words, responsible for both of them. He broke up the scoreless game with a solo shot in the third, his twelfth homer of the season, and then added an essential insurance run in the seventh, an RBI single that scored Eric Byrnes. [and came the pitch after ex-teammate Brandon Medders almost hit Upton]. He also had a walk and stole a base, but was caught trying to take third in a latter inning. Chris Young gets a pass too, for a pair of doubles and a stolen-base of his own, while Augie Ojeda reached safely three times, on a hit, a walk and his team-leading third HBP of the year, as well as trailing Young as the back-end of a double-steal.

The other five position players - a combined one-for-20 on the day - should get together and buy Max a nice steak dinner tonight, to thank him for bailing out their ineffective asses with what is probably the best outing of his short career to date. It's certainly the longest, both in terms of innings, and pitches - he went into the eighth for the first time ever, and left to a warm reception from the Chase Field crowd after hitting Molina with two outs, having thrown 116 pitches, eighty of them for strikes. Only three hits allowed by Max, with one walk and six strikeouts, getting some strong praise from AJ Hinch afterwards:

When we drafted him, he had a plus-fastball and the question was his secondary stuff. He's starting to answer those questions at this level. He's able to throw in some changeups and he's able to mix in a slider and he's not relying solely on being a fastball pitcher. We are seeing the maturation of a good Major League pitcher, and when he's under control and in the strike zone, he's a difficult guy to face. 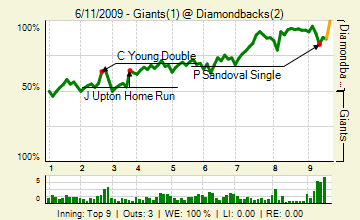 Pleased to get the win, as getting swept here by the Giants would have been a very poor show indeed, especially going against the back end of their rotation. While I'd rather have done better, naturally, it puts us on the right foot to start the Astros series tomorrow. For a day game, a solid turnout in the thread, reaching 400 comments: kishi reached three figures, with dima1109 in the runners-up spot. Also present: snakecharmer, soco, hotclaws, Fiona, pygalgia, TwinnerA, emilylovesthedbacks, DbacksSkins, Sprankton, Muu, luckycc, CardsIrish, katers, ASUJon, pepperdinedevil, chem and AZBOMBERS.

Interesting point to note from last night. "Official scorer Rodney Johnson changed a decision in San Francisco’s 6-4 victory on Wednesday night, awarding a two-run triple to Giants OF Andres Torres and erasing a fielding error by Arizona CF Chris Young. The decision raised Arizona LHP Doug Davis’ ERA to 3.64 from 3.42." Also pleased to see that our next opponents, the Houston Astros, will be arriving with a wheezing bullpen, since it had to go 7.2 innings today, before they finally beat the Cubs 2-1 in thirteen innings. And finally, for a bit of fun, a nice piece on the bullpen phone, including the story of the time the Diamondbacks number became a bit too well-known...