Billy Buckner set a new record this evening. Unfortunately, it was for the most hits allowed by a starting pitcher in the National League this year, as the Giants smacked him around for 13 hits in 5.2 innings. That pretty much guarantees a defeat, right there: in the past eight seasons, only about one pitcher a year has allowed so many hits and not seen his team lose. That team was not the Diamondbacks tonight: instead, this was a weak and ineffectual performance, though it also must be said, the Giants were freakin' lucky. I think 'Skins worked out that their BABIP against Buckner was something like .565.

It certainly doesn't feel like this was a game we led going into the fifth inning, but we were. The main drivers in that false sense of optimism were a two-run homer by Stephen Drew, extending his hitting streak to thirteen games, and a solo homer by Mark Reynolds, his fifteenth of the year, one of two hits for Special K tonight. That puts him on pace to hit 41 long-balls for the season, though he is also on pace for 228 strikeouts, which would completely eclipse the all-time record of 204 which he set last season. Also doing their best to stave off the awful sense of doom and futility which permeated the evening was Josh Whitesell, who had two hits and a walk, and Felipe Lopez (a walk and two hits).

Any other good stuff? Clay Zavada delivered his eleventh consecutive appearance without being scored upon. That's actually an impressive kinda run to start off a career: only a dozen NL players have gone longer. However, it's not even the franchise record as yet, since Doug Slaten was unscored upon in his first eighteen games for the Diamondbacks, in 2006-07. Given the hardly auspicious way Slaten's career has gone since that season, let's hope Zavada does a little better. We also got two innings from noobie Blaine Boyer, though his own fielding error led to an unearned run.

That was one of three errors on the night by Arizona: Justin Upton and Lopez were the other perpetrators. Though quite how Miguel Montero failed to be responsible for one does somewhat escape me. He should have nailed Randy Winn at the plate, after a perfect throw from Upton in the third arrived while Winn was barely half-way down the line from third, but Montero couldn't hang on to the ball. He also helped the Giants score in the sixth, when they tried to squeeze bunt - the ball missed the bat but also the catcher's glove, and the runner on third came home to score anyway.

That was part of a three-run fifth, which buried the team and sucked the life out of the Diamondbacks and turned their fans at Chase against them - it wasn't "Drewwwwwwwwwww" they were saying, that's for certain. However, the biggest blow - in more senses than one - came as part of a three-run fourth, when Sandoval crushed a high fastball from Buckner out to somewhere near the I-10. Er, haven't we seen him do that on a pitch around his neck before? I'd have been making a mental note not to throw him any more like that.

The eight earned runs which he allowed exacerbated the quite astonishing home/road splits for Buckner this year:
Home: 14.2 IP, 27 H, 5 BB, 5 HR, 20 ER, 12.27 ERA
Road:  13.1 IP, 9 H, 4 BB, 1 HR, 1 ER, 0.68 ERA
He isn't the only one: you probably recall Jon Garland's thought on this matter. But overall, the Diamondbacks staff has a stark split between when they pitch at Chase - an ERA of 5.55 - and pitching elsewhere, with an ERA more than two runs lower, at 3.29. On the road, they have the best ERA of any team in the National League [and only the Reds are also below four], but at home, it's the exact opposite, with Arizona owning the highest figure in the NL. Yes, higher even than Colorado. Quite why this is the case... Well, if you can answer that, AJ Hinch would love to hear from you. 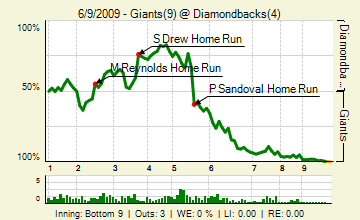 Given it was such a sucky game, it was quite an enjoyable Gameday Thread, with a brisk trade in comments, even if the graph above, as well as depicting the game, also accurately portrays interest in the contest. With only a token comment or four from dima1109, DbacksSkins had a clear road to three figures, with soco in the runners-up spot. Also present: kishi, TwinnerA, snakecharmer, AZBOMBERS (welcome...despite 'Skins best efforts otherwise!), unnamedDBacksfan, hotclaws, pierzynskirules, pygalgia, 4 Corners Fan, Moozazan, westofrome, Scrbl, Muu, singaporedbacksfan, jonny-yuma, soco, mrssoco and Sprankton. The last named is on the recap tomorrow night, so hopefully the team will give him something nicer to write about than seventeen hits allowed and questionable defense.