Share All sharing options for: Diamondbacks 4, Nationals 5: This Game Makes a Lousy Metaphor

[Thanks to luckycc for writing tonight's recap!]

Blog imitates baseball sometimes, and with Jim at the game it was time to promote "a new voice" within the ‘Pit. And despite having as much experience recapping here as AJ Hinch has managing, I was called up. Or you know, a last minute recapper was needed and I was the only who volunteered. Whichever.

The night began on a promising note; Felipe Lopez continued his crusade to make me think he’s secretly a robot by singling to start the first. Small ball brought him around to score after a Chris Young fly out and a Justin Upton ground out each moved him over. That was the last time the Dbacks would lead the ballgame.

A walk, a single and a triple was enough to put the Nationals up 2-1. A homer each in the third and fourth innings for the Nats (one by former Dback Adam Dunn) was enough to chase Petit from the game. In response, the offense got one runner aboard in each of the next three innings, only to have the stop-and-go offense fail to being them home.

Rosales sat down the side in the fifth and someone finally jump started CY’s batteries – he tripled, bringing home Lopez but the rest of the order failed to add on and Young was left standing at third.

As for the bullpen, Rosales gave up one run in the sixth but despite a couple of nail-biting moments by Rauch after he loaded the bases with one out, the bullpen put up zeroes the rest of the game. Yes, Rauch got out of a bases loaded jam without allowing a run. Raise your hand if you saw that coming. Maybe this guy is coming around. Oh please, let him be coming around.

Congratulations to Josh Whitesell who got his first hit of the year. His double off the wall allowed Upton to move from first to third and a ground out by Conor Jackson brought him home. You’re growing on me, Whitesell; now let’s see more hitting.

Down by a run, the chance to tie the game came in the eighth after Byrnes – in for Young in a double switch – singled, then stole second with one out. But Byrnes was caught stealing third after getting a late jump and Lopez popped out the catcher to end the threat, proving that not even Lopez is immune to popitis. For all intents and purposes, the Diamondbacks were done for the night as a fly out and two strikes in the ninth allowed the Nationals to preserve the win.

Want to talk managing? Should Byrnes have had the green light to go to third? Get ready to have your every move second-guessed Mr. Hinch. Welcome to being a manager.

Twelve hits and the Diamondbacks still lost. It would have been a convenient headline for the Dbacks to take this game and usher in the era of Hinch. Baseball’s not that easy and inserting Manager A into Dugout B isn’t enough to guarantee a win. There’s still work to do. 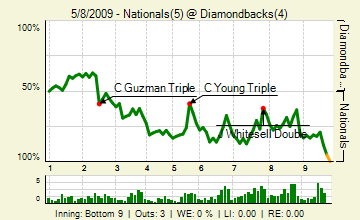 [Update] Now with audio clips from Hinch, Lopez and Upton.