There I was, looking forward to a nice, quiet day - a little afternoon baseball, get home, knock up a quick recap and take the rest of the evening off. Perfect. However, I get to work and the office Dodger fan says, "I suppose you heard?" I presumed he meant LA going 13-0 at home. "Nah. Manny got suspended for 50 games." After I spent much of the morning coming to terms with that little nugget, just as I was about to leave work for the day, I saw kishi's Fanshot, announcing the imminent dismissal of manager Bob Melvin. The old Chinese curse, "May you live in interesting times," came home to roost with a vengeance today. In between those two bombshells, the Diamondbacks played a game of baseball. I could give that contest all the attention it's going to get, simply by finishing that sentence with, "...and lost," then hitting the 'Publish' button. If you want any more, it's after the jump.

Still with me? Not got anything better to do? Dammit. I was hoping you wouldn't follow me here, and I'd not have to write anything at all. Oh, well: since you are apparently deeply interested, here's the details. Dan Haren had a crap outing. Ok: technically, it was a "quality start", being that he went six innings and allowed only three earned runs. But that's by the standards of mere mortal men: any Haren outing that does not last seven-plus innings, or which involves three of the opposition crossing home-plate = crap. In this case, he allowed eight hits and two walks in six, with four strikeouts.

It was going fine through the first four innings, despite a road-bump in the third after a single and double put two men in scoring position with no-one out [the double was hit by Chris Burke. Yeah; that one...] However, Haren struck out opposing pitcher Chris Young, got Giles to fly to Upton in right - no challenging of the Jupzooka today by the Padres! - and fanned Edgar Gonzalez [no...not that one] to keep it scoreless. All was swimmingly well until two outs in the fifth: however, that pesky third out proved the hardest one to get. He walked Young and the next three Padres singled, plating two runs and tying the score. Arizona took the lead in the sixth on a sacrifice fly by Eric Byrnes, but a one-out single and double off Haren in the bottom half of the same inning tied things up again, and made sure Dan's win streak stopped at three.

The bullpens then traded zeros for the next three innings. Each side had chances to go ahead: we had a pair of men on with one out in the seventh, the Padres got their first two hitters aboard in the eighth, but neither side could break through. However, in the bottom of the tenth, Esmerling Vazquez's control wavered - with one out, he allowed a double - then imploded completely, allowing back-to-back walks to load the bases, still with one out, including a free pass to...yes, you guessed it, Chris Burke. The death blow was provided by another former Diamondback, David Eckstein, who singled through the infield, to give the Padres a walk-off victory and send Arizona back home after a losing road-trip, with a final record of 3-5.

But the rest of the story, as the late Paul Harvey used to say, was the same as ever: feeble performance by the Diamondbacks with runners in scoring position. We scored all three runs without an RISP hit, thanks to a double by Haren which scored Chris Snyder all the way from first, and a pair of sacrifice flies. The team was 0-for-7 with runners in scoring position, meaning that in the four games between San Diego and Los Angeles, we hit .032 when we had runners in scoring position, going 1-for-31. The last knock was Josh Wilson's second-inning single on Monday, since when we've gone hitless in 29 consecutive at-bats with RISP. Our season average in such situations continues to drop, and is now .186. There may or may not be such a skill as "clutch hitting" - if there is, your 2009 Diamondbacks are its kryptonite.

We managed only five hits the entire game, though did get six walks. Conor Jackson and Snyder each had a hit and a walk, but once again, Justin Upton was the engine-room of the team's offense, stealing a base as well as getting two hits and a walk, to extend his current hitting streak to 14 games. That raised his season average to .294, and at this rate, he'll have overtaken Felipe Lopez (currently at .303) by the end of tomorrow - Lopez has hit a bit of a wall lately, with three hits in his last nineteen at-bats. Poor Mark Reynolds had a horrible time of it against evil Chris Young, going 0-for-5 with four strikeouts, leaving five men on base. 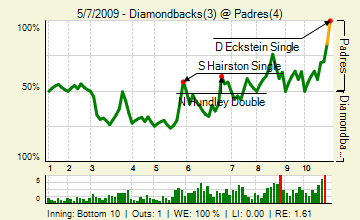 And with that to bed. I've already spent far too much time working on the site today; I think Mrs. SnakePit probably think I'm dead... If we don't fire our manager and see the player we hate most in the division suspended, on the same day again for a while, it'll be quite alright by me...