Share All sharing options for: Diamondbacks 3, Padres 1: Upton of Bricks

Sure, it's 4 in the morning, but I'm still going to find time for the recap. Maybe I'm just crazy like that. After watching the game at Buffalo Wild Wings, I find myself much more interested in putting together a piece about today's game because of the victory. After the performances of the past week or so, it would've been all too easy to cop out after another anemic offensive effort, but a few timely plays ended up making a huge difference in picking up a much-needed win.

If you really broke down the factors behind tonight's game, the chances didn't look that great. We had a guy from AAA jumping straight off the bus and into the fifth spot in the lineup. Our most veteran pinch hitter joined last year's most consistent hitter on the DL (okay, deep down we know that Clark disappearing probably helped our chances, but still). We were facing the 2007 Cy Young winner with an offense that had scored just 16 runs in its past six games. Not exactly a recipe for success.

Felipe Lopez tried to get the offense kickstarted in the first, reaching on a walk. After Ojeda struck out, Lopez stole second, then geared up and stole third as well. But Upton and Reynolds struck out behind him to waste the early threat. Peavy's strikeouts would become a theme in this game; it was clear from the start that he had his really good stuff tonight, and our K-prone lineup was more than happy to oblige him on breaking pitches out of the zone.

On the other side, Jon Garland was dancing through the landmines in Doug Davis fashion -- between letting runners on and having them advance because of defensive errors, the Padres had a few early chances of their own. In the first, Hairston reached with two outs and stole second, making it to third when Montero's throw was off target. Gonzalez walked, but Gerut grounded out to get Garland out of the jam. In the second, Kouzmanoff reached on a Reynolds error and moved to second, but Garland eventually got Peavy to ground into a double play.

The teams traded relatively uneventful zeroes in the third and fourth. Peavy continued to strike out Diamondbacks, and Garland posted two easy innings. In the fifth, Garland flashed his best Houdini skills. Blanco led off with a single. With one out, Peavy tried to lay down a sac bunt, but it was too close to home plate. Montero reacted quickly and made the correct call to try for the lead runner at second, but the throw pulled Ojeda off the bag and both runners were safe (although looking at the replay, it appeared he may have still gotten back before Peavy actually touched second, since Blanco appeared to be sliding to break up the double play -- the umpire was probably blocked from having any angle anyway). Giles hit a grounder to Whitesell, who also gave Augie trouble at second (again, it was an arguable call not to award the out, but a throw on-target would have eliminated any doubt), and the bases were loaded with still just one out thanks to the Dbacks' fourth error in less than five innings. But Justin Upton, the slayer of demons, the master of disaster, collected David Eckstein's flyout and gunned down Blanco at the plate with an absolutely perfect throw for a huge double play, and the game remained scoreless.

Perhaps energized by the play, the offense finally put something on the scoreboard. Ojeda drew a walk with one out, and Upton, the thrilla from manilla, the Ayatollah of rock and rollah, followed with a homer to straightaway center -- coming in Petco, it was certainly a no-doubter. Reynolds and Whitesell both reached behind him, but Jackson and Montero were unable to add any further damage. Still, considering the situation the Padres had with one out in the fifth, the Diamondbacks having a 2-0 lead after the top of the sixth had to be considered a huge success.

Nearing the 100-pitch mark in the seventh, Garland danced out of one more tight spot before calling it a very successful night. Blanco walked with one out, and Rodriguez singled behind him. But Gonzalez pinch hit for Peavy and grounded into a double play, preserving the lead.

Upton came up in the top half of the eighth not needing to prove anything else -- he'd been the difference maker on both sides of the field already. But he smacked another homer anyway, completing the first multi-HR game of his career, and made it a 3-0 game. Again, Reynolds and Whitesell reached behind him, but the Diamondbacks were unable to do anything with runners in scoring position (the win only served to hide those continued struggles -- 0 for 7 in tonight's game).

Peña came in for his usual spot in the eighth and worked a solid inning, retiring the side in order. After a quiet top of the ninth, Qualls came in to lock down the save for the seventh time this season -- but not without a few minor heart attacks first. Gonzalez and Gerut both singled to lead off the inning, and Qualls plunked Kouzmanoff to load the bases with nobody out, bringing the winning run to the plate. But he got Blanco to ground into a double play, conceding the score for two huge outs, and after a Rodriguez walk, struck out Chase Headley to end the game and snap the losing streak. Party hats all around and all that jazz. 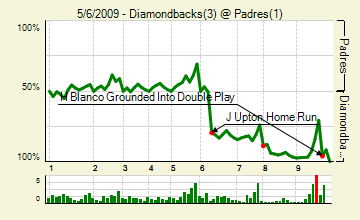 Upton's contributions go without mention: he extended his hitting streak to 13 games, over which time he has 6 HRs and 13 RBIs, raising his average from .167 to .284 in the process. Whitesell's first game up didn't include any hits, but he did draw two walks. Lopez reached twice on a hit and a walk in addition to the two stolen bases, and Reynolds had a couple of hits. Largely lost in the excitement were Conor Jackson and Eric Byrnes each going 0 for 4, extending their streak of futility. On the mound, Garland ended with a very respectable line: 7 IP, 3 H, 0 ER, 3 BB, 2 K. We'll take that every time out, Jon. For the Padres, Peavy struck out 12 but was rewarded with zero run support for the second start in a row. Gonzalez, Blanco and Rodriguez each reached base more than once.

Game two of this little two-game jaunt tomorrow features the magnificent Dan Haren taking on Evil Chris Young in a matchup that should hopefully see us running wild whenever we get on base. A win would secure us in third place for the time being -- 8.5 games behind the Dodgers, sure, but you take what you can get at this point. Amazingly, opponents are hitting just .167 against Haren in his six starts, and it should be fun to watch him take the mound again. Stay tuned -- first pitch must be like 11 hours from now or something. I might just wake up by then.