Share All sharing options for: Diamondbacks 1, Dodgers 3: Well, at least we're not bankrupt...

Not a good day for sports in Arizona. On the day it was announced the Phoenix Coyotes filed for Chapter 11 and could be headed for Canada, the Diamondbacks completed a miserable first month. Helped by two first-inning errors, the Dodgers scored three times in the opening frame, and that was more than enough. Facing a starter who was making his first start in 19 months, Arizona could only manage one run, and fell 8.5 games behind Los Angeles. If the season is not quite over - Los Angeles has the same record as we did at the end of April in 2008 - it is difficult to see any light at the end of the tunnel, onrushing trains excepted.

Max Scherzer extended his winless streak to an even dozen starts, but after the first inning, was impressive enough, posting a quality start by going six innings and allowing only two earned runs. However, errors by Josh Wilson and Miguel Montero in the first gave the Dodgers five outs. An RBI single, an RBI groundout and an RBI...ah, error, meant Los Angeles had all they would need. Scherzer only allowed two hits and a walk over the next five frames, the same as he allowed in the opening one, and struck out four. He reduced his ERA in 12 appearances as a starter to just 3.39, but it wasn't enough, and his record in that role went to 0-7. Juan Gutierrez pitched most of the final two innings and retired all five batters he faced: Scott Schoeneweis then allowed a single before getting the final out.

No - for what must feels like the ten millionth time this season, the problem was not the pitching, it was Arizona's inept offense. Stop me if you've heard this one before, but our hitters mustered only one run in five innings from someone we should have completely pwned. A career journeyman and spot starter, whose last game in that position was 19 months ago. It was clear that the tune was going to be the same after the first inning: Augie Ojeda got one of his three hits on the night, doubling to lead off the game...and was still at second when the inning ended, two strikeouts and a pop-out later. Arizona was 0-for-10 with runners in scoring position - we're batting exactly .200 in the situation  this season - and the only time we troubled the scoreboard was when our starting pitcher got to come home from third on a wild-pitch.

As a fan, it's immensely irritating, because the flaws are obvious, yet no-one on the team seems willing to address them. What is doing to fix the team's inability to hit pitches, that could hardly be better placed if they were on a tee? Is there corrective action underway to address the monstrous pop-up ratios sported by Eric Byrnes (24%), Chris Snyder (26%) and Chris Young (29%)? [League average is a mere 13%] Where is Conor Jackson's extra-base power? [Augie has the same number of such hits, and CJ's XBH rate is half what it was last season] I can understand the manager not being willing to criticize his players in public, certainly. However, the problems we are seeing are so painfully obvious, that standing by his men seems like nothing more than denial, and makes the situation even worse. At this point, Melvin's phlegmatic approach comes over as no more than apathetic indifference: while it may not be his fault, it'd be nice to know he cared. Or at least had a pulse, a question which seems to be in serious doubt. 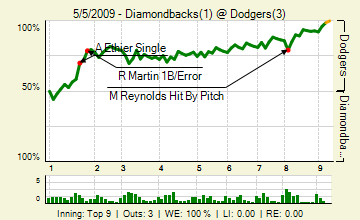 Have to say, another wretched game had no impact on turnout. Almost a thousand comments in the Gameday Thread on Stinko de Mayo - well, from our point of view, that seems a more appropriate name. There was a certain degree of irritation with the team performance, and the consumption of rather more alcohol than was good for us [though that might just be me. I have a nasty taste in my mouth, and I don't think it's just our hitters rolling over and playing dead for Jeff Weaver]. pyromnc cleared 150 comments, chasing 'Skins all the way, while kishi made three figures too. Also present: 4 Corners Fan, unnamedDBacksfan, Azreous, IHateSouthBend, snakecharmer, SeanMillerSavior, TwinnerA, luckycc, sergey606, Sprankton, Muu, Diamondhacks, hotclaws, ASUJon, singaporedbacksfan, Snake Bitten, venomfan, dodgers2009, Tooch27, acidtongue, twsmith23 and Brendan Scolari.

On to San Diego, where offenses go to die. Not that this will be any change for our hitters, will it?