Share All sharing options for: Diamondbacks 2, Dodgers 7: Triple-play can't save the day

Star Wars Day [c'mon, look at the calendar...] proved to be more of an encounter with the Death Star, despite Arizona turning the first triple-play I've ever seen unfold, as the Diamondbacks offense once again sputtered and coughed its way. If it were a horse, it would be on its way to the glue factory by now. All the brave words from players, coaches and managers are beginning to sound like hollow words and empty promises, after Eric frickin' Stults handcuffed the team's batters for the second consecutive start against us. Let's just review what we have done facing him, to what the rest of the National League has done:
vs. Arizona: 11 IP, 9 H, 4 BB, 9 K, 3 ER, 2.45 ERA
vs. the rest: 12.2 IP, 19 H, 10 BB, 6 K, 10 ER, 7.11 ERA
Isn't it time to accept that the team is just not getting it done? And, in fact, hasn't been getting it done with the bat in over a year?

If I were in charge of the Diamondbacks, I would dump Tony 'fastball, right by' Clark immediately, calling up Josh Whitesell. Clark's presence on the roster has been a complete mystery to me since 2006 - in the 247 games he has played for the Diamondbacks since that point, Clark is hitting a feeble .223. This season, he is 5-for-28 [and that's including the double that was foul, courtesy of the umpire in Milwaukee], with 15 strikeouts. Josh Whitesell, meanwhile is hitting .360 for Reno, with as many walks as K's and an OPS of 1.065. He's 27, so I'm not sure what we are waiting for. Of course, I don't know about his 'clubhouse presence,' - but after seeing defensive replacement Clark make an error tonight, I am firmly of the opinion that the clubhouse is exactly where Clark's presence needs to be.

I would also send Chris Young down to Reno until he sorts out what ails him. I know there have been frequent comparisons to Mike Cameron, but that does not mean Young has to ape Cameron's brutal age 25 season [.210/.285/.336 in 141 games]. The good news is, Cameron did improve the next year, but seeing Young flail at bad pitches and miss, take or foul back ones down the pipe, is like watching a baby Harp Seal face Canadian hunters: it's just not fair. Young is zero for his last twenty-one at-bats, with one walk and ten strikeouts; while I'm hardly a professional hitting-coach, he looks completely lost at the plate. I'm not sure who we should bring up, but suspect the Harp Seal would give us better at-bats.

Fundamentally sound baseball was played by only one team tonight, and it wasn't us. Witness the run manufactured in the fifth by the Dodgers. With men on first and second, no-one out and the pitcher up, Matt Kemp danced off second base after the pitch was caught by Snyder. Chris threw to second, but Kemp simply motored his way to third-base instead, without even a throw. A sacrifice fly from the pitcher then scored him, the 24-year old Kemp having completely put one over out 'veteran' catcher. [Speaking of which, two more wild pitches got past Snyder tonight - that's definitely a facet of his game that seems to need improvement.] Contrast Doug Davis's first trip to the mound, also with men on first and second. He bunted into an inning-ending double-play.

That is somewhat unfair, he being a pitcher - except, Davis was also not very good on the mound. His control deserted him, walking four in 4.1 innings, and he also succumbed to a case of Petititis, allowing back-to-back home-runs to Mandy and Ethier. Things would certainly have been worse, except for an inning-ending double-play in the third - and, even more impressively, an inning-ending triple-play in the second. After a single and an error on Josh Wilson, Blake worked the count full and the runners took off as the pitch came in. However, Blake lined the ball straight to Wilson, who flipped to Felipe Lopez for the second out, then on to Conor Jackson for the first triple-play turned by the Diamondbacks since the famous Mark McGwire one off Randy, in the 5th inning on May 31, 2000, against the Cardinals.

Jon Rauch came in to relieve Davis, after he had walked Orlando Hudson on four straight pitches for the second time in the game, bringing Manny Ramirez to the plate - this time with the bases-loaded. Rauch got a fly-ball to the warning track which allowed a sacrifice fly, but escaped the inning without further damage. Not so in the next inning, where a single and RBI double led things off, and led to Rauch being yanked - apparently to the detriment of the water-cooler in the team dugout, according to reports. Look, Jon: it's one thing to be upset when you are relieved after doing your job and doing it well - see Dan Haren for details - and quite another to throw a tantrum after sucking.

Esmerling Vasquez and Leo Rosales on mop-up duty. The former pitched quite well, throwing two scoreless innings, though did require a double-play to get out of a jam in the seventh. Rosales was the replacement for Tom Gordon, DL'd as expected, and allowed an RBI double to Mandy in the eighth. He was, as I noted in the comments, what we got from the Padres in exchange for Scott Hairston. Who is batting .377 for San Diego this year, and has driven in more runs, in only 53 at-bats, than anyone on the entire Diamondbacks roster. Feel free to weep: you could probably construct a fairly solid roster out of players we let go, even if you limited it to those for whom we got little or nothing in return.

On our own offense tonight, Justin Upton had a hit and both our walks - yes, both our walks - though was also picked-off first-base. Again. Josh Wilson had a pair of hits, and Mark Reynolds hammered his seventh homer of the year. It was, of course, a solo shot, our twentieth such in 28 long-balls, and the eighth in a row with no-one aboard. At 3:34, it was the longest nine-inning game for Arizona since the August 29th game last year, which ran 3:39. Also vs. LA. Also started by Davis... 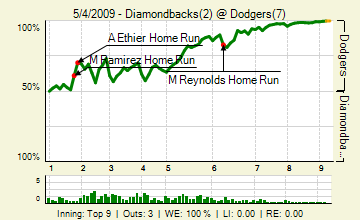 That wasn't really quite the way in which we wanted to perform, was it? We now find ourselves 7.5 games behind the Dodgers, and if the offense can not pull its finger out if its butt and score a few more runs tomorrow, then it may be time to seriously start thinking about applying 'For Sale' stickers to most of the talent on the roster, because they aren't getting it done. kishi was the top commentator this evening - yes, beating 'Skins by a healthy margin of 141-103. Also present: 4 Corners Fan, jaydubsped, luckycc, Sprankton, snakecharmer, SeanMillerSavior, Shifty1, Diamondhacks, AJforAZ, TwinnerA, ASUJon, hotclaws, IHateSouthBend, Muu, Tim Weiss, Tripon, Azreous, RockiesMagicNumber, TheMainMan, Tooch27 and Snake Bitten.

Not happy. Not happy at all...