Share All sharing options for: Diamondbacks 3, Braves 2: Ready to Rumble

Are we in Florida? Because the team appeared to revert back to the form they showed there, struggling in the early innings, going into the seventh behind, but pulling it out late to take the victory. This afternoon, Eric Byrnes dribbled the ball through a drawn-in infield with one out in the eleventh inning to score Mark Reynolds and give Arizona it's only lead of the game - the one that mattered. Reynolds had doubled on an 0-2 pitch around his shins to lead off the eleventh, and was bunted to third by Miguel Montero. Get 'em on, get 'em over, get 'em in - "Fundamental baseball at its finest," said manager AJ Hinch.

While it was the offense who eventually won the game, the heroes of the game were probably the three pitchers used by the Diamondbacks - all hail, therefore, Doug Davis, Juan Gutierrez and Tony Peña. Davis only had real trouble once, in the third, when the Braves had three of their seven hits off him, leading to two runs. However, Atlanta didn't have another hit with anyone in scoring position the rest of the way, and Davis was finally pulled for a pinch-hitter in the bottom of the seventh, having thrown 102 pitches. This time, he can have no argument with Hinch, as his replacement, Chris Young, singled home the tying run in the shape of Ryan Roberts, who himself had driven in our first run immediately before. [Roberts was a late addition to the line-up, Augie Ojeda taking a ball off his left thigh during batting practice]

It was thus over to the bullpen, Less than 24 hours after your relievers needed to throw 6.1 innings is not the time you want a game to go into overtime, but both Gutierrez and Peña were magnificent, working two economical innings apiece (22 and 23 pitches respectively). They retired 12 of the 13 batters they faced, with the only exception a two-out single against Gutierrez in the eighth. Peña took the victory for his two perfect innings, and his fifth win of the season gives him the team lead. Sure, while that's probably a meaningless statistic for a reliever, his 1.85 ERA and 1.19 WHIP are definitely not:

Bit of argy-bargy in the sixth inning, after Justin Upton walked to load the bases. Braves' catcher David Ross apparently took exception to the way Upton flipped his bat and words were exchanged (above), and the benches for both sides emptied. Nothing further happened...for the moment, anyway. Reynolds and Byrnes each got a couple of hits, while Roberts had a hit and a walk. Stephen Drew went 1-for-5 with four strikeouts this afternoon. Can someone please explain why he is batting clean-up? I know we don't have anyone tailor-made for the role, but all analysis suggests it's one of the spots in the line-up you should reserve for one of your best hitters. I'm just not sure Drew qualifies: while he has pretty much been entrenched there since he came back from injury, the results have been mediocre at best. In those seventeen games, Drew has posted an anaemic line of .213/.292/.311, an OPS of .603. He has a single home-run and only four extra-base hits over that time.

It's a significant reason why the D-backs have the worst production out of the #4 spot in the league - the overal OPS of .683  coming into today, is almost 150 points below NL average. Only 25 runs have been driven in from there this year. The obvious candidate to replace him would be Mark Reynolds, and I certainly like the idea of him following up Upton in the order. Opposing pitchers would be less inclined to pitch around him [12 walks in 105 PA out of the three-hole], if they knew the next batter had the capability of swatting the ball out of the park. Reynolds is a much greater threat in that area than Drew. 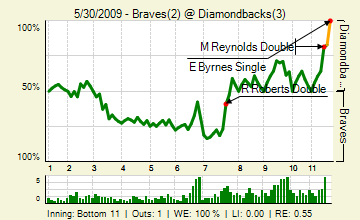 A pretty quiet Gameday Thread, not helped by the 'national' broadcast of the game being basically limited to Atlanta and Arizona - most other places getting the one-sided Dodgers-Cubs game. Also not helped by 'Skins being out, so that's a hundred comment, right there. Some British guy led the comments, with hotclaws in the runners-up spot - also present were sayheyupton, 4 Corners Fan, pygalgia, Giannaros, unnamedDBacksfan, Zephon, emilylovesthedbacks, kishi, snakecharmer, Azreous, luckycc, venomfan, soco, mrssoco and drdemars, so thanks to them for their participation.

Poor Chad Tracy. No sooner had he shown signs of getting out of his long funk, with a three-hit, four RBI night, than he has to go on the DL with a strained oblique muscle. Under normal circumstances, it may or may not have been strictly necessary to make the move but as we already have an extra pitcher on the roster, it would have reduced our bench to just three men. With Tony Clark still estimated as at least ten days from returning, this got Josh Whitesell the call back up from Reno - was somewhat surprised to see him pinch-hit in the ninth! [Not least with a left-hander on the mound] Should keep dahlian happy anyway, providing he gets to see his share of playing time.

Anyway: good win for Arizona, guaranteeing us, at worst, a split of the series - and with Scherzer going tomorrow, I feel hopeful we can end up taking three of four. 'Skins is on the recap then, but I hope he'll also share some of his experiences watching the Tucson Toros today.