it's never a good sign when the team's Win Probability is less than three percent, before everyone has had a chance to bat. But such was the case tonight, as Jon Garland can now empathize with Ryan Roberts and Jon Rauch, because all three know exactly what it's like to be heavily tattooed... This was easily the worst start of Garland's time with us - while he's had a couple of bad outings before, he did at least get into the fourth inning. Not the case this evening: he had to be rescued [and I mean that in a 'put out of his misery' kinda way] after 2.2 frames, having allowed, nine hits, three walks and nine runs, all but of them earned.

It was the second where things started to go pear-shaped, a smartly-turned double-play, begun by Chad Tracy from his knees, having helped Garland to escape the first. No such luck the next time he took the mound - he led things off by allowing five straight hits by the Braves' hitters, mostly on pitches up in the zone, and capped by a two-run double to the pitcher. A horrendous throw by Parra in right-field didn't help matters, and the Braves leapt out to a four-run lead. Arizona did pull one back on a single by Tracy, but he was then out at the plate, trying to score all the way from first on a Snyder double off the outfield wall. Though with the pitcher's spot due up next [and, as documented earlier this week, Garland hitless this season], I can hardly fault third-base coach Chip Hale for sending him.

The Braves largely rendered the decision moot, piling on for five more runs in the top of the third, all of them scoring with two outs. With a man on first, Garland walked the Braves #8 hitter - never mind, I thought, the pitcher's up next. However, Jon then walked Jurrjens too, to load the bases. Didn't stay that way for long, as first a two-run single, and then a three-run homer, unclogged them for Atlanta. It all happened so quickly that Leo Rosales was still warming up in the 'pen, and Snyder had to stall for time. If you heard a whimpering sound coming from Chase Field at around 7:45 this evening, that would have been our relief corps, realizing they have to go for 6.1 innings tonight.

To their credit, they cowboyed up to the task and only allowed one run the rest of the way, that one charged to Rosales in his 2.1 innings of work. After him, came the major-league debut of Daniel Schlereth: his family [assuming they got here from Colorado in time] must have been happy to see their boy post a 1-2-3 inning in the sixth. Jon Rauch did what he had to, throwing 32 pitches in two scoreless frames - the most he's worked in over two years [random note: did you know Rauch used to be a starter? 11 games in that role, the last being in 2005]. Clay Zavada worked the ninth, and provided a fairly-rare bright spot for the D-backs, striking out the side, two of them staring at the final pitch. All told, in the 6.1 IP, the bullpen allowed four hits, all singles, and one walk, with five strikeouts.

Despite being dropped into a nine-run hole, the Arizona hitters did their best to make a fight of it. Chad Tracy smacked a three-run homer into the visitor's bullpen, immediately after losing his bat, at high-velocity into the stands [somewhat embarrassingly for Sutton and Grace, they referred, for quite some time, to the lady who ended up with the bat, as a gentleman!]. He had four RBI and three hits, which is good to see - he has finally muscled his season batting average up above the Uecker line, leaving just Chris Young of the current roster below it. Our other big chance was the sixth, when Parra's third hit made it 6-10, with two men on and still nobody out. However, Justin Upton, suffering a rare ohfer [he'd hit safely in 30 of his previous 33 games], grounded into a double-play to defuse the threat. Ryan Roberts also had a pair of hits.

However, you know it's a bad game when it's incapable of distracting me from moving boxes into our storage pod, for dispatch to the new SnakePit Towers. Had the game even been semi-competitive, I would happily have abandoned the whole packing endeavor, but frankly, I had rather more fun sorting stuff out - among the wonders upon which I stumbled, autograph pictures of Jay Bell and Byung-Hyun Kim, and a ball that also appears to have several names on it, but I can't quite decipher who they might be... 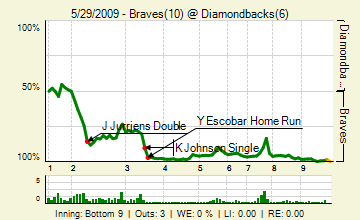 There was a Gameday Thread. I wasn't in it. In fact, I haven't even opened it up, but I am fairly sure things were said, comments made, players praised and disparaged. I'll get to it tomorrow. Right now, my body feels as if it's been used for hitting practice by J-Up. Oh, look: DbacksSkins is back and it's as if he'd never been away, piling up 137 comments, 81 more than runner-up pierzynskirules. Also present: 4 Corners Fan, ASUJon, luckycc, pygalgia, Scrbl, mrssoco, soco, Hoytsstash, emilylovesthedbacks, snakecharmer, katers, Azreous, hotclaws, dahlian, unnamedDBacksfan and TwinnerA.

Day-game tomorrow, folks: we're on Fox TV. Hopefully, it'll go a bit better than this one, with a pitching performance by our starter that doesn't suck. And with that, to unconsciousness: tonight, not the comfortable sleep of a post-Haren start, but the near-flatline oblivion of the completely exhausted.