Diamondbacks 4, Brewers 1: The Most Dan-gerous Game

Share All sharing options for: Diamondbacks 4, Brewers 1: The Most Dan-gerous Game

Today was Dan Haren's sixth straight game throwing six or more innings and allowing two runs or less. It's been a devastating run of awesomeness, and only three Arizona pitchers have had longer streaks [one of whom did it twice - can you name them? Answers at the end of the piece]. Tonight's performance was enough to steer the team towards victory, and while it may not always have been pretty, it's worth nothing that the Diamondbacks in the past week do have a record of 5-2, and are the closest to the .500 mark than they've been in three weeks.

It just seems a whole different game with Dan Haren taking the mound. The opposing pitcher retires the first 12 batters he faces? Not a problem, because we have every confidence that Haren will match him, zero-for-zero. We can wait. As long as it takes. Despite what happened in the past two games, I'd even have felt confident with a 1-0 lead going into the bottom of the seventh, with Haren on the mound. That is how different things feel, the way Dan is pitching right now. Eight innings, four  hits, two walks and a season-high eleven strikeouts, just another day at work. Good job he went eight, Tony Peña probably being unavailable: I'm not sure how Haren might have felt about Gutierrez or - heaven help us all - Tom Gordon, being sent out there to protect a lead. Qualls in the ninth, I think we can cope with, and a one-out double was more a blip than cause for genuine concern.

Looper had been perfect through the front four innings, and we were just beginning to loosen up the jinxing tools when Mark Reynolds rendered it moot with a double to deep right-center. Justin Upton then added an infield hit, and unlike last night's fluky squibber, this was a perfectly deliberate thing of beauty, a bunt to the pitcher's left that had to be played by the hippo. By the time Fielder picked the ball up, Upton had whizzed past him up the line and a tag was out of the question. Conor Jackson broke up the shutout with a single, and although Eric Byrnes barely beat out the double-play, Chris Snyder followed with a two-run double, to give the Diamondbacks three for the frame. And the way Haren was pitching, that felt like about thirty.

The Brewers did get on the board in the bottom of the sixth, but Arizona came right back with a monstrous lead-off bomb - hittrackeronline.com estimated it at 440 ft, which may seem low, but they say "Upton's homer had a very high trajectory, which added to its majesty, but cost it a bit of distance compared to the optimal launch angle." After a shaky start, Justin is really turning it around, and his nine-game hitting streak has seen his average get up to .269 and the OPS to .810. Jackson and Snyder each had a pair of hits, which helped overcome the complete lack of walks.

At the other end of the scale, Tony Clark and Chris Young both saw pinch-hit duty, with the same (lack of) results: a strikeout. Nick Piecoro covers Young's slump and our outfielder isn't sure what's up: "I've been working with different stances and different hand slots lately. I had a good spring, and I kind of got away a little bit from what I was doing. I have to find whatever I can do to make myself as comfortable as I can be at the plate. Right now I'm kind of in between different things, and I'm not getting the results right now." There's no denying that, and with almost 1,500 plate-appearances under his belt, one does have to wonder at what point would we have to accept we are seeing his true potential?

Don't want to end on that thought, so here's a happier one: according to MLB.com, Dan Haren was assigned the same horse in both Kentucky Derby pools he was involved in - a 50-1 long shot called Mine That Bird, which naturally won. Brandon Webb was unimpressed, saying to his team-mate: "I'm about ready to Tonya Harding you. I'm about as jealous as I can get right now." One presumes he was joking. Anyway, he're the post-game audio, with Melvin talking about Haren, and Upton's improvement, while Haren himself discusses his splitter, the joys of some run support, and why he didn't go for the complete game this time. 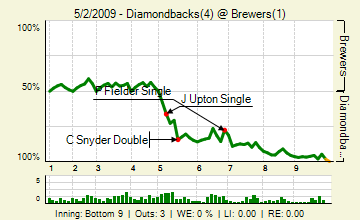 A diverse and varied Gameday Thread. Or 'rambling and off-topic', if you prefer - especially after those present knew I'd departed... Hmmm: won't make the mistake of announcing that again! :-) 'Skins reached the double-century mark, but was pushed all the way by soco's 141 comments. Also present were venomfan, kishi, unnamedDBacksfan, Wimb, hotclaws, Muu, luckycc, TwinnerA, AJforAZ, sb24ws2005, mrssoco, Sprankton, IHateSouthBend, 4 Corners Fan, pierzynskirules, Snakebitten, SnakebitForever, emilylovesthedbacks, backtocali, and sergey606, and the conversation rolled on well after last pitch, covering such things as the boxing 'match' in Las Vegas tonight [if I'd flown all the way from Manchester for that, I would be miffed]. Almost 750 comments all told.

11:05 am start tomorrow, Arizona time - I intended to get the GameThread written and scheduled tonight, but I really want to head to bed and relax. So if there's no sign of it and first pitch is looming, I trust one of the usual suspects will step into the breach. Spraxton on the recap [assuming he doesn't get distracted by watching cars whizzing around an oval at 150 mph], so looking forward to that. I'll be reviewing the entire month of April, so keep an eye out for that at some point tomorrow too.