Share All sharing options for: Diamondbacks 5, Braves 2: Arizona keeps the heat on Lowe

Dan Haren pitched eight very solid innings, and Chad Qualls got by with a little help from his friends, Stephen Drew, Augie Ojeda and Mark Reynolds, in the ninth. Together, they helped the Diamondbacks do what they were denied a chance to by the rain, on the Sunday before last - beat Derek Lowe. He surrendered double-digits in hits for the first time in 21 starts, dating back to August 8 last season: Justin Upton led the hit parade with three hits, raising his season average to .346.

After the trauma of the Padres series - even the game we won felt like we lost it somehow - it was good to get back on track with a solid, well-played D-backs game. Naturally, Dan Haren was at the forefront, with an excellent performance, which kept the potentially-shaky bullpen out of the picture, at least until the tricky eighth had been negotiated, with the lead maintained at a solid level. Even Haren ran into some traffic on the base-paths there, giving up two of his seven hits - however, he got the ever-dangerous Chipper Jones to stare at strike three, with the 113th pitch of the night. He ended with two runs in eight innings, eight strikeouts and Haren's third straight game with no walks - 88 batters and three weeks since the last one. Over the past month (plus a day), his K:BB ratio is 45:4.

The ninth was fun - just another 1-2-3 inning for Qualls, if you look at the box-score. However, what that doesn't show is the stellar infield defense that produced it. Braves catcher McCann grounded a ball back up the middle that, as Sutton put it, almost had Ojeda shaking hands with Chris Young in center. After snagging the ball, the Littlest Ballplayer leapt and turned, getting just enough on the ball to allow part-time [but looking more permanent there with every game] first-baseman Reynolds to dig the ball out nicely on a short-hop. Anderson then grounded a ball on the other side of the bag to the diving Drew - who threw the ball over from his knees, Reynolds again digging the ball out as if born to it. Great to see Drew smiling and winking at Ojeda afterwards, as if to say, "Anything you can do..."

Justin Upton. What is left to say about this young man? 21 years old, now hitting .346 on the year - and that, after a start where his bat was so cold, Fry's contracted to keep meat in his locker. In the past month, he is hitting over .400 - to be exact, his line is .404/.463/.752, for an OPS of 1.215. Three hits tonight, none of them cheapies, and a stolen-base too. Mark Reynolds had a pair of doubles, though was also picked off after the second, straying too far away from the bag. As mentioned in the comments, I can't say I blame the man - given Chris Young was at th plate, Reynolds pretty much had to make his own way to third... Young was 0-for-3, and is now batting less than half Upton's season average, at .169, though did have a second-inning sacrifice fly, to score Eric Byrnes. EB had two knocks, and is batting .300 over the past three weeks, which is good to see.

Ryan Roberts also continued his hot spell, with a pair of hits, and seems to be buying himself more playing time. We were discussing in the Gameday Thread how we should be constructing the line-up. dahlian thinks Roberts should be replacing Ojeda in the middle infield, with Reynolds at third and Josh Whitesell - still hitting a ton in Tucson - called up to be the everyday first-baseman. I'm trying to convince him he should write this up in more detail and post it as a story here, so hopefully he'll get the chance to put something together. We should get an extra roster spot when we revert to seven rather than eight in the bullpen, but I doubt that'll be any time this weekend.

A good start to the series, and looking at the pitching match-ups, we would seem to have a good chance of taking two of the remaining three. We have the definite edge on Sunday, when Max Scherzer goes - the other couple of contests are closer, so we will probably win one and lose one, though I'm remaining vague on which one will be which. [Jair Jurrjens and his near-two ERA obviously stands out, but with his BABIP figure of .258, he's about due for a correction, I reckon. Tomorrow night would be convenient for this to occur] 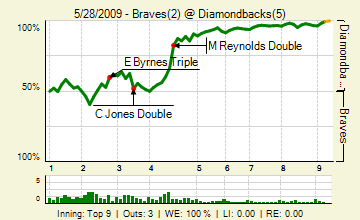 An enjoyable Gameday Thread - and a remarkable occurrence, in that most comments were by...well, me. As if I didn't spend enough time on this site as it is. Valuable backup was provided by kishi, and also present were Azreous, jaydubsped, Muu, snakecharmer, TwinnerA, pygalgia, LucaMaz3, hotclaws, 4 Corners Fan, mrssoco, kishi, friendly (if sarcastic) visiting fan Hoytsstash, soco, and dahlian. Sorry this isn't as uniquely innovative as azreous's recap last night, but really, how can I compete with that? I did make an effort to restage the entire ninth inning with our video-camera and Barbie dolls, but SnakePit Jr. refused to edit the footage, so that one is stuck in production hell. :-)

Off to bed, and the restful sleep only a Dan Haren victory can provide. Better than NyQuil, that is.