Share All sharing options for: Diamondbacks 5, Padres 8: Leo, King of the Bungle

Remember when you were a kid and the teacher would have you do Mad Libs as a group? (If you're over the age of 25, just work with me here.) I loved Mad Libs. It allowed me to use my imagination to come up with the most absurd stories known to man. Conversely, it also was a great diversion from reality, which comes into play here, as the reality of tonight's Diamondbacks' game was none too pretty. You can pick your favorite (or least-hated) answer as you go along and make this recap whatever you want it to be.

Having finally derailed the Padres' win streak, Arizona came into Chase Field looking to , a concept that doesn't seem quite as mind-boggling as it did two weeks ago. Calling the first two games a "split" doesn't really do them justice, considering the frenetic last few innings in each that saw the Diamondbacks do their best to cough up seemingly insurmountable leads. Of course, this was a direct contrast to about a week ago, when the D-backs kept storming back in games where they fell behind early, so maybe this is just a case of everything balancing out in the long run.

Regardless, they were going to have to go through former Cy Young winner Jake Peavy to get the job done tonight, and with Billy Buckner opposing him, Arizona's chances . After the previous couple games gave half the people in the state heart attacks, Jim preferred to work a little reverse mojo for this one: "I think it would probably be best if we came right out of the gate playing dreadful baseball, fell behind early and saw Augie Ojeda pitching the last three innings."

And the club paid the price dearly in the early innings. Similar to his last start against us when he struck out 12, put up a great performance against our oft-anemic offense today. But despite our flailings -- remember, you can't spell flailing without failing -- at the plate, we still managed to reach him for a few runs. More on that in a bit.

Buckner fulfilled the first part of Jim's wish right from the get-go, serving up a two-run homer to NL-leading HR hitter Adrian Gonzalez in the top of the first. Still, after that momentary blip, Bucker settled in and looked much like he did in his last start against Oakland, throwing a heaping helping of strikes and avoiding any other real trouble. His only shaky moment through the opening five frames was in the third, when Peavy singled and Giles walked to start the inning. Buckner battled back -- he struck out the irrascible David Eckstein and got Hairston to ground into a double play, exploiting the two former D-backs .

Meanwhile, Peavy was . Through five, the Diamondbacks only had two hits in the hit column, . Upton contributed to the only significant threat to Peavy in the fourth, when he beat out a ball hit on the left side of the infield, and then stole second. Drew walked, but Reynolds and Tracy were unable to do anything with the runner in scoring position, and the inning ended quietly.

Judging from the bottom of the fifth and the top of the sixth, this looked like a game that was going to be over, fulfilling Jim's desire . We went three up, three down in the bottom half on some terrible looking at-bats -- Byrnes popped out , Roberts fouled out, and Buckner was set down on strikes. Meanwhile, after cruising for four innings, Buckner fell apart in the sixth. He gave up three consecutive hits, a triple and two singles, to make it a 3-0 game with runners on first and second and nobody out before finally getting the hook. Zavada came in , but he gave up a base hit and a sac fly that made it 5-0. All the runs were charged to Buckner, leaving Billy with a line that doesn't really reflect his decent outing: 5 IP, 7 H, 5 ER, 1 BB, 5 K.

Staring at a five-run deficit, things looked pretty bleak. Enter last week's Resilient Diamondbacks, and as has been the case for just about the entire season, Justin Upton was . Parra, hitting leadoff in tonight's game, starting the inning off with a double. Montero singled sharply to center, which prevented . But Upton crushed a triple to center field that scored both runners, and Drew followed with a base hit of his own that suddenly made it a two-run game. Even though the inning ended quickly after that, Peavy looked human and the offense .

That positive trend continued into the seventh. Leo Rosales came in and had a great inning, retiring Blanco, Peavy -- who hit for himself at 91 pitches -- and Giles very quickly. Two one-out singles in the bottom half finally managed to chase Peavy, and with runners on the corners, Parra hit a sac fly to right to make it a one-run game. Now the Paders were on the ropes, staring at the same improbable kind of comeback the Diamondbacks struggled with the previous two nights.

Problem was, somebody apparently caught up to Rosales between innings and . Rosales threw 20 pitches without getting an out. Sixteen of those pitches were balls. Let's break it down just to give this train wreck the appreciation it deserves: He walked Eckstein on five pitches, after getting ahead 0-1; he threw the ball away on a first-pitch sac bunt by Hairston, a disastrous play that somehow resulted in two separate errors and a runner scoring from first on a bunt; he intentionally walked the mighty Gonzalez; he walked Kouzmanoff on six pitches, and one of the strikes was an inside pitch that was fouled off; and with the bases loaded, he walked Headley on four straight -- three changeups that missed low, and a fastball at the eyes. Well done, you must get up VERY early.

Esmering Vasquez was brought in to make sense of all the commotion, and did an admirable job. He only allowed one of the runs to score (on a one-out single), but struck out two and took care of pinch-hitter Tony Gwynn Jr., who . Unfortunately, the damage had already been done. Following that debacle, the Diamondbacks wasted a small opportunity in the eighth when Drew doubled with one out, but Reynolds struck out and Snyder K'd behind him to end the inning.

Lost in all the anger and confusion was Jon Rauch's uneventful ninth inning; he worked around a leadoff single by Eckstein to get a Hairston strikeout and a double play off the bat of Yo Adrian, meaning that Rauch . You know, in a situation that really didn't matter. And Parra had an RBI triple in the ninth to score Ojeda, who had doubled with two out. But that's about it. 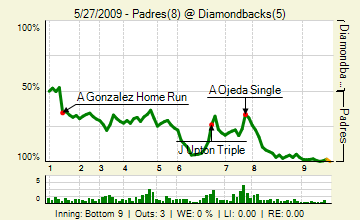 Nothing too surprising in the graph for this one. Rosales was truly awful, and his percentage reflects it -- remember, that performance didn't cost us the lead, and it STILL counted that much against our chances. Reynolds reminded us of his dark side, and Byrnes and Tracy juuuuuust missed the cut on Dishonorable Mention with their hitless performances. Upton was a stud, and Augie had two hits off the bench to provide a little spark.

For the Diamondbacks, Upton was once again the star -- three hits to raise his average to .335, a stolen base and a couple of ribbies. Parra had a pair of hits and RBIs; Drew and Ojeda also had a pair of knocks apiece. Drew also drew (huh) the only walk of the game for Arizona. Rauch had his scoreless inning, and Zavada and Vasquez had a clean slate as well, although they each gave up runs charged to their predecessors. For San Diego, Peavy got the win despite his meltdown, and Heath Bell got one out for the save. Eckstein reached base four times, Gonzales had two hits and a base on balls, and Hairston, Giles and Kouzmanoff all reached twice.

Atlanta comes to town for a 6:40 p.m. game tomorrow night. Dan Haren will be on the mound, which is both fun to watch and great for our chances of winning. Now if only he could ...

Audio updates from after the game, courtesy of Buckner, Roberts and Hinch: