Diamondbacks 6, Padres 5: To Boldly Go, Where No Max Has Gone Before...

Share All sharing options for: Diamondbacks 6, Padres 5: To Boldly Go, Where No Max Has Gone Before...

In the bottom of the ninth, when the Padres had the tying run at third, there was one moment that reminded me of why I love this game. Kevin Kouzmanoff flapped one off the end of the bat down the right-field line. As it floated through the air, Kouzmanoff ran down the first-base line trying frantically to bring if fair with body English - and Juan Gutierrez desperately did the same, willing it foul. It appears Gutierrez's gravitational field won out, because the ball dropped just foul. A couple of pitches later, he smacked the ball towards the same gap in right-center where the key blow fell past a despairing Parra yesterday. Only, tonight, there had been no double-switch, and Chris Young glided over smoothly, like a well-oiled dolphin, to snare the game and preserve the win.

For the second time in as many nights, the Diamondbacks completed seven innings with a six-run lead, only to see the bullpen implode in spectacular fashion. That the Gurgling Vortex of Relief Suck stopped just short of achieving an intensity which would make a Large Hadron Collider envious.. Well, I'm not sure whether this counts as a win or not. I suppose the victory is the thing, but the final five outs, as Esmerling Vasquez and Gutierrez combined to allow four hits, two walks, two hit batters and a wild-pitch, did not exactly make for comfortable viewing. And it had been going so well once again. Max Scherzer had entered previously unexplored territory for him with the first out in the seventh, going past six innings for the first time in his career, and retired the side in order, preserving the shutout.

With hindsight, we should have known something foul was about to happen, when Chris Burke - yes, that Chris Burke, the one whose batting average for Arizona last year started with a "1" - homered to lead off the eighth for the Padres. A single followed, and Scherzer left to warm, well-deserved applause, having allowed six hits and now walks, striking out ten in his seven innings of work. Doug Slaten entered, threw one pitch, lined ferociously to Ryan Roberts at third, and exited. Enter Vasquez, tonight, playing the part of Jon Rauch - as Mark Grace put it, going up there hoping to retire batters rather than intending to do so. His portfolio for the night went single, walk, HBP, single, strikeout, wild pitch, walk. The six-run lead was now two, a single away from being eliminated entirely. Retching sounds could be heard coming from the 'starting pitcher' section of the Arizona dugout.

Gutierrez came in with the bases loaded to face a pinch-hitter - and not just any PH but the man leading the majors in homers this year, Adrian Gonzalez. He was retired on a fly-ball to left, but the case of amoebic Rauchitis which had infected Vasquez  was transmitted to our new closer between innings. As when Gutierrez came out for the ninth, he allowed two singles then hit the next batter, putting the tying run on second with nobody out. At this point half the Padres lineup consisted of former D-backs, in Burke, David Eckstein, Scott Hairston and Josh Wilson - and it was Scotty who saved the day, grounding into a double-play which saw Augie Ojeda turned into Mini Sirloin Burger while turning the pivot. A run scored, but the two outs were more than adequate compensation. Please see the opening paragraph for the final at-bat of the game, and Arizona just dodged blowing a 99%-plus Win Probability for the second night in a row.

So, phew. We win. An in case you were wondering where the A-pen were, the answer is, largely unavailable, both Chad Qualls and Tony Peña having appeared five times since last Wednesday. That included a rare two-inning stint for Qualls, while Peña's appearances included outings of 29 and 24 pitches, for a total of 95 in the previous six days. As a result, Hinch was not going to go to them unless absolutely necessary: to his credit, he stuck with this plan even though it would have been very, very tempting to go to Qualls for the ninth. Instead, Juan Gutierrez got his first career save, and became the third different Diamondback in the past week to pick one up. [Got some way to go to catch up with our expansion siblings in Tampa, who have had six different people get saves this season]

Let's just pause for a moment to give some praise to an unsung hero on the roster this season. Ryan Roberts, who appears to be trying single-handedly to disprove the credible working hypothesis that baseball players with neck tattoos suck. He had three hits tonight, boosting his season average to .366. That puts him in the top five in the National League, for people who have appeared in 29 games or more. Now, that's obviously misleading, because in all those contests, Roberts has accumulated less than 50 trips to the plate. But it's an admirable level of production from someone who only snuck on to the roster, and has also played admirable, error-free defense at both third- and second-base.

Elsewhere on tonight's line-up, the only other Diamondbacks player to have a multi-hit night was Max Scherzer. He broke the scoreless deadlock with an RBI double in the fifth, then scored on Parra's double. He added another run with a single in the sixth - and, get this, that hit came after the Padres sent in a reliever specifically to face him. That gives him five hits for the year, most among Arizona pitchers - both Doug Davis and Dan Haren have four, though Jon Garland has yet to trouble the official scorers, having gone 0-for-19 with eleven strikeouts. Only two National League players have more at-bats without a hit: Milwaukee's Brad Nelson (21) and Houston's Jason Smith (25). Though they are both position players, so should know better; Smith appeared in two games for Arizona back in 2007. 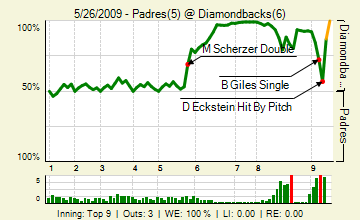 Woo-hoo! Girls' night out! The ladies dominated proceedings in the Gameday Thread - nothing arranged, just seems that all the men were out hunting mammoths or something. Recipes were exchanged, make-up tips discussed and the dreamy nature of Mark Reynolds giggled over. Yes, this has been another edition of Sweeping Generalizations, with your host, Jim McLennan. Actually, it was basically the same as any other thread, but the top five spots all went to the fairer sex, in the form of snakecharmer, luckycc, 4 Corners Fan, hotclaws and TwinnerA. Also present [from both sides of the gender equation]: sayheyupton, Azreous, soco, mrs snakepit, kishi, mrssoco, pygalgia, AJforAZ, Wimb, Scrbl, katers, Fiona, ASUJon, Sprankton, paqs and SeanMillerSavior.

Couple of points of news, courtesy of our partners at KTAR, that I didn't quite get to before the game. "He's a third baseman playing first base at this point; and I don't see that changing long-term." That was AJ Hinch discussing Reynolds at first - though one could read the "don't see that changing" as either a) he's a third baseman, or b) he's playing first-base. Mark said he is more comfortable at third, but is getting a first-baseman's glove, so will play there when needed.

And from the medical wing. Felipe Lopez was available to pinch-hit tonight, and should be back in the lineup tomorrow. Brandon Webb played catch from 100 ft. and will continue to lengthen out his sessions until he is throwing 150 ft. before stepping onto the mound.  "We don't have like a circled date" for that, Hinch said. And good to see Conor Jackson back in the dugout this homestand. He has apparently lost eight to ten pounds, but should get to do some baseball activity in the next few days, although most of it will be in the cage.