Diamondbacks 7, Padres 9: Snatching defeat from the 99.2% jaws of victory

Share All sharing options for: Diamondbacks 7, Padres 9: Snatching defeat from the 99.2% jaws of victory

At the start of the eighth inning, the Diamondbacks were "clinging" to a 7-1 lead, with what fangraphs.com called a 99.2% win probability. Let me repeat that: 99.2%. It takes a really special kind of player, to be able to deliver the kind of suckitude necessary to lose a game from there. Ladies and gentlemen, I give you: Jon Rauch.

Ok, it's not quite fair to solely blame him, but he was the certainly the catalyst. There was some debate in the Gameday Thread on whether Doug Davis - who had pitched seven fine innings - should be allowed out there to start the eighth, but the consensus was that he should be, albeit with bullpen support when needed. I'm not sure we quite meant that he should be left out there to load the bases with one out, though another in a seeming recent flood of errors by Stephen Drew did help in that process. However, the fateful decision was made to bring Jon Rauch in, and it appears Hinch had no memory of what happened the last time Rauch entered the game with the bases loaded.

That was on Wednesday afternoon in Florida, when he promptly uncorked a wild pitch and then gave up a three-run homer. Today was hardly any better, allowing hits and runs to both the batters he faced. And, while Clay Zavada got the first man he faced to pop up, the next one floated a three-run double to the gap in right-center [one Chris Young would probably have caught, except he had been replaced in center by Parra, part of a double-switch when Rauch entered the game], and it was a one-run game. An RBI from 'Free' Scott Hairston off Chad Qualls then tied the game in the ninth, and Arizona wasted a one-out double from Justin Upton, with Mark Reynolds and Chad Tracy having utterly dreadful at-bats, both swinging for the fences when a bloop single would have won the game.

At this point defeat was inevitable, and the only plus is that San Diego didn't stretch out the torture. Tony Peña came in for the tenth inning, and courtesy of a Headley homer, the Padres were 9-7 up before he retired a batter. The procession which was the Arizona hitters going 1-2-3 to end the game was entirely predictable, and the team had blown a bigger, later lead than anything we overcame during the recent road-trip. No: Qualls was not the only pitcher deserving criticism this afternoon. But the fact remains, if he had not allowed hits to both batters faced, we would almost certainly have won this one. He was the center of the gurgling vortex of suck which were our relievers today, losing a six-run lead, and more in three innings. The final total for the bullpen: 2.2 innings pitched, eight hits, five earned runs, and three inherited runners all allowed to score.

After seven innings, this was quite the game for the Diamondbacks, thanks mostly to a five-run third inning which can only be described as "interesting". It included a homer from Chris Snyder, a triple by Davis [the first from any Arizona pitcher in almost two years], a balk, a hit batter, a run-scoring wild-pitch and a Padres' error. Almost as eventful was the bottom of the sixth inning. That one saw two intentional walks, the Padres' catcher and manager getting ejected after a 3-2-3 double-play attempt was called safe at home, and Gerardo Parra driving in a run with a bases-loaded HBP, which really looked like he leaned into the ball rather than making any particular effort to get out of the way. It appears, going by subsequent events, that the baseball gods frown on such behavior, with extreme prejudice.

Beyond the third, the Diamondbacks were hitless with runners in scoring position, despite a number of opportunities, and that eventually proved fatal. Upton had a couple of hits and a walk; Drew drew a couple of walks; Reynolds and Snyder got a hit and a walk apiece. But the overall numbers were disappointing, with seven hits in 35 at-bats. Up until the eighth Doug Davis had been very good, the only damage a solo home-run to Adrian Gonzalez in the third. He did have some control issues, not least the back-to-back walks which followed the home-run, but he got out of the jams with his usual aplomb. His mediocre final line - four runs on five hits and four walks, in 7.1 innings, striking out six - was largely a product of the bullpen's failings after he entered the dugout.

This is probably the first time we can point a finger at AJ Hinch as far as a main reason for the defeat. He had showed a remarkable willingness to go against 'the book' on the road-trip, but inserting Rauch into this game was definitely the kind of thing Melvin would have done. Putting him in was tolerable, only if one of the A-pen guys was there in case of trouble. Rauch opened the door for the Padres, and it should have been slammed shut by Peña or even Qualls, rather then replacing The Biggest Loser with a guy making his third ever appearance above Double-A. The five runs conceded in that inning as a result, was when the save was blown - not the 'technical' one off Qualls during the ninth. 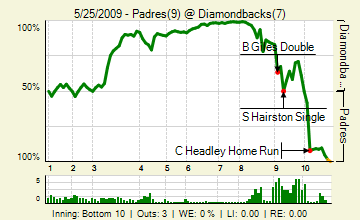 soco led the Gameday Thread towards 500 comments, ably assisted by hotclaws. Also present were snakecharmer, kishi, Pyromnc, sayheyupton, Wactivist, TwinnerA, emilylovesthedbacks, pygalgia, 4 Corners Fan, mrssoco, AJforAZ, Scrbl, Muu, jazzbo13 and Smoggie. The way in which everything fell apart seemed to leave most people stunned rather than anything else, and it'll be interesting to see how it affects the team too. This was a self-inflicted kick in the teeth , and it'll leave a mark. We'll see how the players rebound from such a disastrous loss tomorrow.