You knew the winning streak would have to end some time.  After a 6-2 loss at the hands of Josh Outman the more cynical fans might say call this a return to the normalcy of a losing team.  Sure, they have a good chance of being right, but the biggest thing to take from this game is that, for the first time in a long time, you can shrug your shoulders and proclaim with confidence that it's just one game in a long season.  Lady luck can be a cruel mistress and today, for reasons only she knows, she simply wan't on the Diamondbacks side.  In other words, the story here is that there is no story.

Sure, the pitching may not have been great.  But on the other hand, there was no troubling negative outlier in the performance.  Garland didn't have his great stuff, especially struggling with his control, but the end result (six innings, three runs) was right in line with what you expect from him.  Slaten once again failed to get a lefty out, but again, no surprise here.  The team knows that he's filler and if not for a couple rainouts and the misfortunes that befell the Schoeneweis family he wouldn't even be on the team.  If one wants to be dire, you can point to Esmerling Vasquez's continued ups and down, but frankly, I've been so pleased with the way this bullpen has come together this season it's just not a big deal to me.

Of course, that leaves the elephant in the room - the offense.  It's obligatory to point that that after such a high-octane week on the East coast the boys in Sedona Red came to Oakland and put up a measly two runs in two different games.  It would be even easier to look at these games and hail the return to the normalcy of offensive ineptitude.  There's no doubt that this was a frustrating game from a frustrating offense, but to be honest it was fluky as all get out.

The story of the day was obviously the four double plays rolled up by Mr. Outman - aided in large part by the five free baserunners granted by the base on balls.  For some perspective, those four double plays were three more than Outman had rolled up in his six prior starts this season.  Even more unlikely, those four ground balls were induced by a pitcher with .50 GB/FB rate for the season by a team.  And most unlikely - this anemic, two-run output came on a day when the Diamondbacks hitters set a season-low for strikeouts.  Justin Upton and Mark Reynolds were the only two Snakes to take the walk of shame back to the dugout and it happened only once for each.  As I said - fluky, fluky, fluky.

Sometimes the win just isn't in the cards.  There's nothing more to do than to tip your cap to Outman and the A's and hope for better luck tomorrow.  Luck that this team will apparently need as they return to Phoenix to take on the hottest team in baseball, the San Diego Padres.  I swear that's not a typo.  Bring your Clay Zavada signs to Chase Fieldand enjoy the fact that once again you can watch your boys in sedona red play without near-certain anguish and doomlurking behind every corner.  In other words, like a normal baseball fan again.

A non-Cubs fan that is. 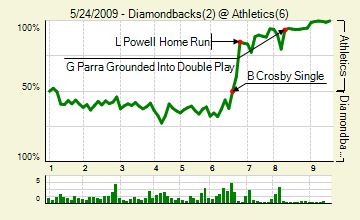 409 comments in the Gameday Thread. I surprised myself by providing the third-most: first time I've managed a podium position in a while! I trailed a long way behind pyromnc's 119, and also came in behind Tim Weiss. Additionally present: sayheyupton, TwinnerA, Wimb, 4 Corners Fan, hotclaws, Muu, snakecharmer, AJforAZ, pygalgia, soco, unnamedDBacksfan, nargel and Azreous - I sense a good few people are away or otherwise absent for the weekend.