Baseball is a strange game. Last night wasn't one I expected to win, and tonight wasn't one I thought we'd lose, feeling we'd torch Edgar Gonzalez, while Dan Haren shut down the A's. While the final result was as anticipated, I am apparently not very good at this "expectations" lark.  Still, one thing was business as usual: the team once again trailed, looking more or less dead and buried before storming back out of the grave - their previous five wins have been like that, with four of them involving deficits in the seventh inning or later. The only way to be sure of stopping the Arizona UndeadBacks from coming back, it appears, is by removing the head, or destroying the brain...

Otherwise, while one pitcher going against his former team this evening did have a good start, it was former D-back Edgar Gonzalez rather than former-A Dan Haren. You'd have got long odds against it unfolding like this beforehand, but the team launching bombs on a chilly evening in Oakland, turned out to be the home-town Athletics rather than the visiting Diamondbacks. It wasn't just the pitching match-up which made that a surprise. The Oakland A's came into the game, dead-last in the American League for homers. They didn't have a single long-ball from April 14-21, and were averaging 62 trips to the dish per home-run this year.

But you wouldn't know it, as they took Haren deep four times in the first twenty-four plate-appearances. Former 1st-round Arizona pick started the trotting with a two-run shot in the first, then Jason Giambi added the 400th* of his career to lead off the fourth inning and was followed one out later by Adam Kennedy. Nomah then completed the Night of the Long Flies in the bottom of the sixth. That's only the second time in his entire career, Haren has seen more than two of his pitches leave the park, never mind giving up four homers. His final line: seven innings, nine hits and no walks, but five earned runs, all of them coming courtesy of the four-bagger.

At Haren's final pitch, that looked like more than enough offense for the A's, on a night where it seemed like the long road-trip finally caught up the Diamondbacks - they looked tired and lethargic in just about every aspect of the game. Never mind Gonzalez's major-league career ERA of almost at six, in seven Triple-A starts this season, his ERA was 5.26. But after Felipe Lopez doubled and Gerardo Parra singled to put men on the corners with no-one out in the first, it was all downhill for Arizona against EdGon. While we did eventually get one of those men home, on a sacrifice fly by Stephen Drew, the team only had one other at-bat with runners in scoring position while Edgar was in the game - and he didn't leave until the sixth inning.

The Diamondbacks had their chances, not least in that sixth, where they made the A's throw no less than forty-one pitches, yet somehow still failed to score. Justin Upton and Drew both walked, which saw the exit of Gonzalez, but Mark Reynolds grounded out and Miguel Montero flew out. Eric Byrnes worked a nine-pitch walk, but all that did was set the table for Chad Tracy to strike out with the bases loaded. However, things dramatically turned the other way in the eighth after veteran Russ Springer - who debuted in 1992 - loaded the bases again, this time with no outs. Byrnes and Tracy delivered fully this time, each swatting two-run hits, and yet another final-third deficit had been overcome.

Would it be enough? The missed opportunities in the second-half continued to pile up for the Diamondbacks. After tying the game in the eighth, and again in the ninth, Arizona had a man on second with one out, but couldn't get him any further: Chris Young, Ryan Roberts, Drew and Reynolds also going down swinging. A lead-off man in the tenth was also erased, on a line double-play. And into extra innings we went, with the bullpen advantage clearly in favor of Arizona - Oakland's fifth pitcher had gotten three outs before we even had to replace Haren. Juan Gutierrez threw two hitless frames and Tony Peña added a scoreless tenth, before we entered what proved the decisive and final eleventh.

The key at-bat was probably by Justin Upton, with one out and a man on first, and a new reliever in for Oakland. He promptly uncorked a pitch that would indeed have dispatched any zombies standing in the batter's box, sending Upton to the ground in a heap. We've seen what happens next, against the Rockies last year. Don't make Justin angry. You wouldn't like him when he's angry. The next pitch, chest-high, was rifled into left-field, and a single back up the middle by Drew scored the go-ahead run for the Diamondbacks. Mark Reynolds then delivered a two-run double into the right-center gap, adding a pair of insurance runs that would become very, very important in the bottom of the eleventh, as Chad Qualls came in to defend an 8-5 lead.

After getting Matt Holliday to ground out, things fell apart for our closer, as four consecutive hits scored two runs and put the tying man on third with only one out. In Qualls' defense, only one of the balls was hard hit, with two infield singles and an excuse-me swing by Nomah off the end of his bat on an 0-2 pitch. However, they all count, and what had been a 98.1% chance of victory after the first out, was now more than 40% lower. However, Qualls has shown an almost mystical capability of coaxing ground-balls when necessary, and Hannahan obligingly swun at the first pitch he saw. Drew flipped the ball to Roberts on second for the force, who then fired over to Tracy to end the game and complete the latest in a series of stunning comebacks.

Given we had only four hits through the front seven innings, I'm frankly astonished that we ended the game with fifteen. Drew and Upton each had three hits and a walk, while Reynolds and Lopez each picked up a couple. The latter was forced out of the game after his second hit, pulling up lame with what was described as tightness in his left hamstring. It didn't look too serious, however, and I imagine they were just being cautious on what was, as mentioned, a cool night [the temperature at first-pitch being only 55 degrees, and I'm sure it was much less than that by the end of the game, approaching four hours later]. Montero and Byrnes each had a hit and a walk, but Young went right back into the pit whence he came, going 0-for-5 with three strikeouts. 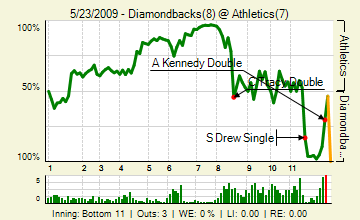 It's perhaps worth going through those five come-from-behind victories in the past week, and seeing what the low-point of them was, as far as win probability goes:
Monday (5-3 vs. Marlins): 16.7%, RBI single makes it 2-0, two out, sixth inning
Wednesday (11-9 vs. Marlins): 6.2%, exit Peña/enter Qualls, eleventh inning
Thurday (4-3 vs Marlins): 15.3%, Tracy K's, first out, seventh inning
Friday (2-1 vs A's): 30.5%, no-out Oakland single, second inning
Saturday (8-7 vs. A's): 2.8%, one-out Oakland double, seventh inning
So by that measure, tonight's game might have been the most impressive comeback of them all, from four runs down with just six outs left.

This series isn't just a return for Haren - it also marks one for AJ Hinch, who was drafted by the A's in 1996, and played three season for them from 1998 to 2000. His first series here as manager has proven eminently successful, with victory locked up before the finale tomorrow, in which the Diamondbacks go for the sweep. The road trip is now at 6-2 with one to play, and the victory evens Hinch's managerial record at 7-7 - and, I note, does the same for his record in one-run games at 3-3, after a trio of consecutive successes since Thursday. Whatever may happen tomorrow, it's been a roaring success. But why stop now?