The Diamondbacks play the final leg of this road trip in my own backyard, starting Inter-league Play here in Oakland, California. They've done really well so far this trip, going 4-2 in games in the very warm and humid environments of Atlanta and Miami. How would they do in the cold air of the Oakland Coliseum? Would the team struggle after getting in at 3am the night before? And would my winning streak of attending games continue? Keep reading to find out...

Tonight's matchup featured Arizona's recent callup and "#6" starter, Billy Buckner, against Oakland's #2 starter, Trevor Cahill. Buckner's ERA coming into tonight's game was 15.75, courtesy of a horrible relief appearance early in the season against L.A. when he gave up 5 runs in two-thirds of an inning. Tonight was Buckner's first start since late 2007 with Kansas City. Cahill is very much a rookie - his first career game was Oakland's second of the season. He has been decent, but not consistent, and in his last start in Detroit, Cahill gave up 7 runs and couldn't get out of the 3rd inning. The Diamondbacks have had a tendency to make struggling pitchers look like Cy Young candidates, and according to my friend, the A's have had trouble when facing new pitchers.

Despite the ominous look at the start based on numbers and history, this game ended up being a pitcher's duel! Both pitchers, who each pitched 7.1 innings with a similar pitch count, had pretty good stuff tonight - from where I was sitting, sliders and sinkers kept the hitters off guard. (Buckner said after the game that he didn't have his curve ball - but he didn't seem to miss it.) Both starters were good at getting around base runners, either with double play balls or deep fly ball outs. The cold marine layer (it was 50 degrees and breezy at first pitch) kept most of those fly balls from being anywhere near dangerous. Matt Holliday's solo home run in the 2nd inning and Chris Young's home run in the 5th inning (his first home run in a month!) were the crux of each team's offense. Aside from that, both teams had only two base runners reach 2nd base. Augie Ojeda stole second and scored the Diamondbacks' first run in the 3rd inning, and Justin Upton was stranded on third base in the 9th. For the A's, Kurt Suzuki and Nomar Garciaparra reached second in the 8th and 9th innings respectively, and neither scored. Jon Rauch came in for the save in place of Chad Qualls and pitched himself out of his own mess (two on with two out) to lock down a 2-1 win for the Diamondbacks.

Other Diamondbacks highlights in an otherwise quiet game: Billy Buckner also had to pitch around two D'back errors, and did so very adeptly. He essentially gave the tired bullpen a night off, something greatly appreciated by his manager, A.J. Hinch. His pitches seemed controlled and he pitched at a very fast pace. (At 9:00, this game was in the 8th inning.) Gerardo Parra had another RBI, giving him as many RBI as he has games played. For not being a natural left fielder, Parra played pretty well in the field tonight, as did Ojeda at 3rd base. He pulled a Mark at one point, bare-handing a slow roller and launching it to Reynolds at first base. With his first home run in a month and a single later on, Chris Young ended the night 2 for 3 - let's hope this is a start of good things to come for him! And most importantly, the win tonight guarantees the Diamondbacks a winning road trip (a record of 5-2 so far), with things looking in our favor the rest of the weekend. Dan Haren faces off against former Diamondback Edgar Gonzalez tomorrow night, and Jon Garland will start against Josh Outman (who?) on Sunday. 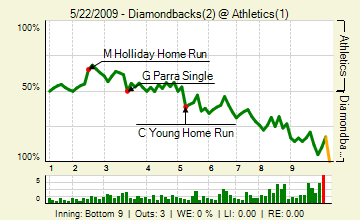 If interested, a few of my photos from the game are behind the jump.

Billy Buckner warms up before the game. 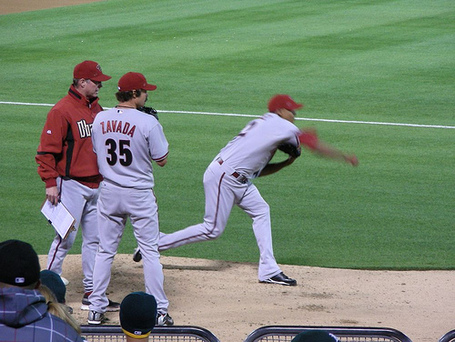 Zavada and Vasquez warm up in the 8th inning. Both were ready well before Hinch needed them - very good bullpen management tonight. 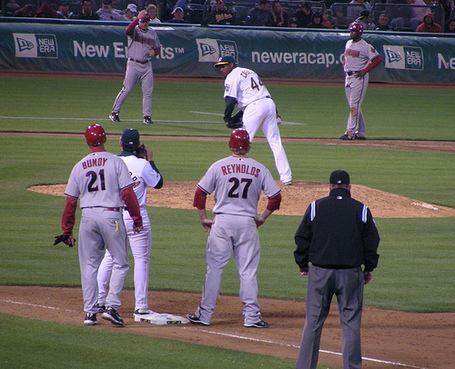 Look, base runners!! A rarity in this game. Upton at 3rd, Reynolds at 1st. I swear, at one point even Chris Young was on 1st base, but he was erased on a double play before I could take a picture.

Jon Rauch warms up to close it out. This man is scary-tall in person.

Victory!! The only shot I managed to get before people were in my way.