"I just don't want to be an old man, throwing another log on the fire, feeling sorry for myself and talking about what I could have done when I was young. All I want to be able to say is 'Hey, I gave it my best shot.'" -- Clay Zavada

The story of Clay Zavada has been an inspirational one, recounted previously before, but deserving of another telling. A 30th-round draft pick by the Diamondbacks in 2006, he had a decent first season in pro ball with the Missoula Osprey. But that December, his father died, and Zavada quit the game to fulfill a promise he'd made to complete his degree. Said Clay, "I was driving 200 miles in order to go to school on Monday, Tuesday and Wednesday, then delivering furniture the rest of the week and giving pitching lessons on Sunday." [See this article for more on his time away] As a graduation present, he gave himself the summer playing independent baseball, with the Southern Illinois Miners, in the Frontier League.

But he did so well, Arizona worked out a rare 'trade' with the Miners, and he re-entered the Diamondbacks farm system, this time with the South Bend Silver Hawks. There, his numbers were insane: in 24 appearances, he had an ERA of 0.51, finishing with a scoreless streak of 30.2 innings, and hitters batted only .056 off Zavada. That got him promoted to Double-A, and a brief call-up to the majors on May 12. He didn't get into a game, and was sent back down the next day. But with the bullpen having taken a royal beating yesterday, he got the call from Mobile again last night, and made his debut with a perfect seventh inning of work, striking out two of the three hitters faced.

As if that wasn't enough, Mark Reynolds' two-run homer in the eighth made a winner of Zavada in his major-league debut. That completed a true fairy-tale - Hollywood would reject The Clay Zavada Story as utterly implausible - and netted him a faceful of shaving foam from Chris Snyder during the post-game interview. He becomes the fourth Diamondback to get the W in his major-league debut, and the first reliever. [Can you name the other three? Answer at the end of the piece.] More importantly for the team, while it was no doubt an exhausting stop, it gave them three of the four games in Florida, and improved them to 4-2 on this road-trip.

Perhaps most impressive has been the fight shown by the team: in all three victories, Arizona trailed going into the seventh inning. In the opener, they came back from two runs down; in the night-cap yesterday, it was from three runs behind. And today, they were 3-1 down again with six gone, before Chris Snyder's solo shot and Reynolds' blast turned things around. Even the solitary defeat saw them rally to tie things from a three-run deficit, and almost again, after the Marlins took a 7-3 lead. The Diamondbacks could easily have rolled over and abandoned the season - "everyone" said they were toast after Bob Melvin got fired. But whaddya know: at 5-7, AJ Hinch now has a better winning percentage than Melvin this year. Little steps...

It was a struggle tonight, with Andrew Miller shutting the Diamondbacks down almost completely in the first five innings, with only one hit and a pair of walks to show for Arizona's efforts. However, we knew it was only a matter of time: the Marlins bullpen was in an even more perilous state than ours, so the odds were, they were going to push Miller too far. And so it proved. The first crack showed in the sixth, with Ryan Roberts' second double of the game - he was then driven in by a Reynolds' single. And the seventh saw Snyder make it a one-run game, with a one-out solo shot to left-field. By the end of that frame, Miller had thrown 112 pitches and was done.

In a remarkable coincidence, both teams went to major-league debutants promoted from Double-A when it came time to pitch the eighth inning. Zavada's inning was immaculate, getting a pop-out to short before fanning Bonifacio and Hermida. The Marlins' new arrival...not so immaculate. Oh, he got the first two, but then Justin Upton fought back from an 0-2 count to draw a walk. Reynolds then smashed the first pitch out of FinsToTheRight Stadium, his twelfth homer of the season. I was somewhat surprised they didn't send Zavada out there for the eighth, but instead we turned to our usual fangsters, in Tony Peña and Chad Qualls, despite a solid workload of late.

At first, this seemed to backfire with a leadoff double in the eighth, but the next six Marlins were sent reeling, including Qualls striking out the side in the ninth. The pitching staff finished with sixteen K's in total, the most in a regulation contest since August 20, 2004 vs. Cincinnati, when Randy Johnson was in his prime, striking out 14 in 7.2 innings. And do you think Mark likes it in Florida? This four-game series, he has seven hits, four of them leaving the yard, three walks, six stolen-bases and seven RBI. He's got that OPS up to .926 now. Roberts and Snyder also had two hits, but Chris Young's miserable streak continued. He piled up his sixth and seventh consecutive strikeouts, before finally putting bat on ball - and popping up on the infield, naturally.

Somewhat lost in all the late inning drama [they'd have saved a lot of time, we'd have been much happier and the AZ players a lot less tired if they'd just skipped the first six innings of each game in Miami] was a solid outing by Max Scherzer. Another quality start, going six innings and allowing three runs: he was partly to blame, managing to balk a runner from second to third, the first such act by a Diamondback this year [only seven teams are now balkless in 2009]. Still, he struck out a season-high ten, and did enough to keep his team in the game. That was all Mark Reynolds needed. 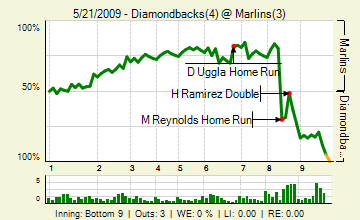 Has any Arizona player ever had back-to-back nights posting a WP of more than +50%? Or a series with a total of +141%? That is how much Mark Reynolds has meant to the team during their Florida stay. Get the feeling we were a bit fatigued as fans after the double-header - over 1,500 comments in one day! - and so it was back down to a little over 400 this afternoon. Even 'Skins couldn't quite crack three digits, with Smoggie following in second. Also present: luckycc, snakecharmer, hotclaws, kishi, 4 Corners Fan, Azreous, TheDBackFan, mrssoco, ASUJon, soco, TwinnerA, sayheyupton, AJforAZ, Pyromnc and pepperdinedevil.

On to Oakland it is - the team will be whizzing across country as we speak, and linking up with Billy Buckner, who will be starting tomorrow's game against the A's on the West coast. It's been a tough series, there's no doubt about it, but taking three out of four, in a town where we've had hellish problems over the past few seasons, makes it a lot more pleasant trip, I'm certain.

Trivia answer: The other Diamondbacks to win their major-league debuts, were Micah Owings  [April 6, 2007], Edgar Gonzalez [June 1, 2003] and the highly-obscure Gerardo Guzman [July 1, 2000[, who only appeared in seventeen career games and was gone from the majors less than a year later.