Share All sharing options for: Diamondbacks 11, Marlins 9 (13): Extra, Extra, Read All About It

This was a long day for the Diamondbacks. First and foremost was the news of Scott Schoeneweis' wife passing, which was documented in the earlier recap and in full detail here. Then it was a day/night doubleheader, the earlier game of which saw the D-backs rally twice but fall short 8-6. In the nightcap, the team fell behind early only to storm back again and again, showing remarkable resiliency in the face of adversity. Setting aside this morning's unfortunate tragedy, this was a hell of a game to watch.

But let's start at the beginning -- it's a very good place to start. Felipe Lopez led off the game with a double, and we appeared ready to race out of the gates. But he was stranded there, as both teams failed to get anything else going in the first. The Diamondbacks went down in order in the second, and then Bryan Augenstein started pulling his best (worst?) Doug Davis impression. In the bottom half, he imploded after retiring Cantu to lead things off, giving up a fun little single-walk-double-single-walk-sac fly sequence -- with an unhelpful error by Parra and walking the pitcher as part of it -- that turned a tie game into a 4-0 Marlins lead.

On many a night this season, that deficit would prove to be a deflating first step to another loss. But Justin Upton and Mark Reynolds weren't letting this team lose both ends of the doubleheader today, and the top of the third was their first defiant stance in that direction. Augenstein helped his cause by drawing a walk with one out. Lopez (who also had a big game) slapped a base hit to left, but Parra flew out for the second out. In stepped Justin Maximus Upton, who blasted a three-run shot to the upper deck in left, nearly erasing the deficit in one fell swoop. But the team wasn't done yet. Drew doubled, and Reynolds managed to get him in on a questionable error by De Aza (yes, it should have been caught, but he had a hell of a path just to get to it), which tied the game. Montero walked and Byrnes reached on an infield hit, which reluctantly chased Hayden Penn -- although the Marlins' bullpen didn't see quite as much use in the first game as ours did, so it wasn't as much of a concern. Badenhop got Tracy to fly out harmlessly and keep the inning from exploding any further, but the game was tied once again.

The next two innings were relatively uneventful, but Augenstein gave up a two-run jack to Jeremy Hermida in the fourth that stuck the Diamondbacks in another deficit. Still, Bryan managed to limp his way through the fifth inning as well, helping the bullpen avoid what would have been even more ridiculous work than what would ultimately be required (more on that later). The offense appeared listless for a couple of innings, going down in order in the fifth and wasting a one-out Byrnes double in the sixth. And Badenhop helped his own cause in the sixth when he successfully worked the squeeze play with a runner on third, making it 7-4. Again, with just three innings to play and three other comebacks wasted in the earlier parts of the day, it seemed like that might be it.

But Upton and Reynolds, et. al., were like AW HELL NAW. With Parra on first and one out in the seventh, Upton knocked a base hit to right, and they moved up a base on Ross' error. Drew hit a sac fly to score one run (and nearly had it fall to score two if not for a good catch by Ross), and then Mark Reynolds crushed a ball to left-center to tie the game yet again. And the Marlins went down in order in the bottom half, meaning once again everything reset and it became a two-inning game. Or so we thought.

First, there were a few minor attacks to avoid on both sides. Tracy and Roberts reached with one out in the eighth, but Arizona was unable to score. Gutierrez worked around a base hit in the Marlins' half. Upton led off the ninth with a base hit and stole second with one out, but Reynolds and Byrnes could do nothing to drive him in. The Marlins came up with a chance to end the game in the ninth and walk off a double winner today, but somehow Gutierrez escaped and left the bases loaded after a leadoff single and a couple of walks. Just like that, there was bonus baseball -- or double bonus baseball, considering the doubleheader. Luckily, Hinch had snuck in two innings of Rosales and Gutierrez, so the pen wasn't decimated, just very heavily used.

After a harmless 10th and top of the 11th, the Marlins had a huge opportunity to win the game when Tony Pena lumbered out for his second inning of work. He started the inning by plunking Ramirez, who moved to third on a single by Cantu. With nobody out, Hinch played the "use your best reliever in a high-leverage situation" card by bringing in Chad Qualls, who was simply masterful. He got Baker to ground out to Lopez and hold the runner at third, and after walking Uggla intentionally to load the bases, slammed the door on the Marlins' rally by getting a 4-6-3 double play to end the inning. Since I'm not expected to be an objective observer, I can safely say that was TREMENDOUS work.

Seemingly emboldened by the second chance, Reynolds was like OH JAM and hammered his second home run of the night, giving the Diamondbacks the lead. With two outs, Tracy walked and stole second, but for once the lack of getting a runner in from second was excusable. Qualls stayed in to hit so he could pitch the bottom half, and he'll have to continue searching for his first hit of his career (0 for 5 now) after being struck out to end the inning.

So with Qualls on the mound in a save-like situation, but actually in line for a win, our chances plummeted rather quickly. De Aza hit a double to left, which Eric Byrnes somehow managed to deposit into the stands when he tried to transfer it to his throwing hand, putting a runner on third with nobody out. Unlike the previous two times, we weren't able to stay on the tightrope unharmed; Coghlan singled to drive in the run, and just like that the lead was erased. Qualls managed to dance around a sac bunt and an intentional walk to get out of the inning, and once again the game was tied.

Faced with the prospect of the game going even further (it was already past 1 a.m. Florida time), the usual suspects pulled the Diamondbacks through one last time in the 13th. After a leadoff double by Lopez and a walk to Parra, Justin Upton hit an absolute bomb to left that made it an 11-8 game. Given both the situation and how far he hit it, I don't fault Justin for taking a bit of a look at that one. Reynolds did his best to add to the margin, drawing a walk and then stealing second with one out (his fifth stolen base of the day, counting his four from the first game), but he was stranded and that was that.

No fresh arms left in the pen. Your regular closer just finished two innings and went from being in line for a win, to a loss, to a win. Your other high-end arms had already been used in this game, disregarding the toll of the first half of the two-fer. So who do you call to get the save? Jon Rauch, that's who. The same Jon Rauch who stuck Doug Davis with a whole bunch of runs in the first game, and the only pitcher who'd done any sort of meaningful work (Rosales pitched, but just a third of an inning). If Rauch had somehow managed to blow this lead, I'm pretty sure a handful of people would have hopped on the next flight to Florida to deposit him in the Atlantic Ocean somewhere, but the big fella got the job done. He struck out two batters in the inning and had a pretty effective curve working. Sure, he gave up a solo shot to Dan Uggla, but with the three-run cushion, that was okay. And the Diamondbacks finally, blessedly, could look up at the scoreboard and see that beautiful "F" at the end, having picked up a much-needed W. 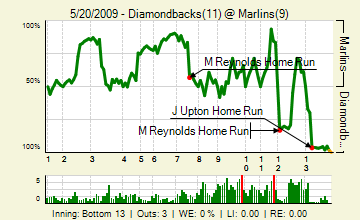 Phew. Reynolds' contribution will probably be high enough to be deemed the MohD in about 160 other games this season, but not this one. Considering the roller coaster of a graph above, this many people being on both sides of the equation is not particularly shocking. And for the most part, it makes sense. Qualls being so far in the positive is a testament to what a gem he worked in the 11th -- it's enough to even overcome him blowing the lead in the 12th.

Shall we touch on the relevant contributors? It'll take some time. Four-hit games for both Upton and Lopez -- the latter added a walk as well. Montero and Tracy each reached twice on walks. Byrnes had a couple of hits. Roberts had a hit in his one PA. Augenstein had a awful day on the mound, but he managed to draw a walk and score. And Mark Reynolds had the two homers, a walk, and a stolen base, leaving him with this line for the two games combined: 4-9, 2 BB, 2 HR, 3 RBI, 3 R, 5 SB. Have a day, son.

On the flip side, Parra was an ugly 0-for-6, although he did score two runs. Toss in the aforementioned Montero and Tracy, and the three were 0-for-15. And Chris Young managed to make an appearance, striking out for the fifth time in five at-bats today. He's like Bizarro Reynolds in today's twin bill, which is even more bizarre when you consider how much Markkkk usually strikes out. On the mound, Gutierrez worked a couple nail-biting scoreless innings, and Pena had a scoreless frame -- of course, he owes Qualls a HUGE thank you for that.

For the Marlins, Uggla reached base five times (he had a monster day himself), Hermida and De Aza had three hits, Cantu had a pair of knocks, and Ross and and Baker both reached twice. Sanches, Lindstrom and Calero all turned in solid work from the pen.

Not surprisingly, given both the length and excitement of the game, it was a busy second GameDay Thread. Nearly 900 comments, the tone of which fluctuated almost as much as the graph above. But you'd be hard-pressed not to walk away from this one feeling pretty satisfied about the outcome. Skins (247) and kishi (174) set the pace. The list of who chimed in: Wailord, sayheyupton, DbacksSkins, kishi, Wimb, hotclaws, luckycc, snakecharmer, 4 Corners Fan, Jim McLennan, jazzbo13, soco, TwinnerA, pepperdinedevil, venomfan, jonny-yuma, Azreous, dahlian, ASUJon and paqs.

After the rainy, hectic schedule of the past few days, there's still a series finale to play tomorrow, although it's sprinkling over Florida as we speak. Or as I write. Whatever. It'll be Max Scherzer against Andrew Miller in a game where you'd think we would have the advantage, but after odysseys like tonight, absolutely nothing can be taken for granted.