It's pretty hard to write a recap or give the impression that this afternoon's contest matters in any meaningful way, after the news broke early on that Gabrielle, the wife of Diamondbacks' relief pitcher Scott Schoeneweis, had been found dead at their family's home in Fountain Hills. In the light of that, the first part of the day's double-header really faded into near-insignificance. Obviously, Scott left the team immediately, but it can't have been easy for the rest of the team to play, their thoughts inevitably being with their team-mate, as were those of Diamondbacks fans.

That said, in any other circumstances, this would have been an enjoyable enough game, the Diamondbacks rallying from three runs down to tie it. Then, after the Marlins had scored four runs in one at-bat off Jon Rauch, to go 7-3 up, the team rallied again, getting the tying run into scoring position in the seventh. And, it could be argued, it would have been a tie-game, had first-base umpire Mike Estabrook not blown a call on Eric Byrnes that inning, calling him out when replays showed Eric just legged out a hit. It was that kind of game: Dan Uggla's three-run homer, which proved the decisive blow, hit off the left-field foul-pole, so a couple of inches and...

Still, Doug Davis can at least have no complaints about getting pulled early in this one, as his control was wretched. He allowed five walks and six hits in 4.1 innings of work. He wasn't helped by a questionable strike-zone from home-plate umpire Chris Guccione, but truth be told, he just didn't have his best stuff, and fully deserved to get his league-leading sixth loss. Admittedly, he was not helped by Jon Rauch. In the ultimate statement of managerial confidence, he came in with the bases-loaded and one out in a tied game. Unfortunately, the word "misplaced" should be added to the previous sentence, as he uncorked a wild-pitch and then allowed Uggla's homer.

That added three runs to Davis's line, and one to Rauch, though he was able to follow-up by posting a zero in the sixth. The Diamondbacks did pull closer, getting a run on a Drew groundout  in the sixth, and adding a Tracy homer and Parra RBI single in the seventh. However, we just couldn't get any closer, and Doug Slaten gave up a run to a right-handed batter in the bottom of the eighth, plating an insurance run for the Marlins [His being called up yesterday didn't make much sense at the time - did we really need another LOOGY? However, events subsequently make the move eerily prescient...]

Let me talk a bit about Chris Young, who has had a perfectly wretched day - as I type this, he has just struck out as a pinch-hitter in the night-cap. That makes him 0-for-5 with five strikeouts for the double-header; things reached a nadir in the eighth, when he struck out trying to bunt Mark Reynolds into scoring position. He stormed off down the tunnel hurling his bat ahead of him - the camera, beautifully, caught Dan Haren sitting on the bench, dead-pan, with his fingers stuck in his ears. But Young's batting average is now down to .171: since April 29, he is hitting .107 [6-for-56] with two walks and eighteen strikeouts. I'm no hitting coach, but his at-bats have been painful experiences. Reno seems like the only solution, even if Alex Romero is the only solution.

On the positive side, let's start by honoring Mark Reynolds, who tied the team record by stealing four bases in a game - the first time a Diamondbacks player has done that since Tony Womack on August 3rd, 2000. Indeed, no Arizona man had stolen even three in a game since Craig Counsell in August 2005. He also had two hits and a walk, while Gerardo Parra and Chad Tracy each got a couple of knocks, while Chris Snyder homered [a two-run shot that tied the game at three in the fifth] and got Arizona's other walk. Parra's RBI made him the second player since 1964 to have RBIs in the first five games of his career [the other being Mike Lansing in 1993]. However, in the debit column, Stephen Drew committed his first and second errors of the season, each of which helped the Marlins to score. 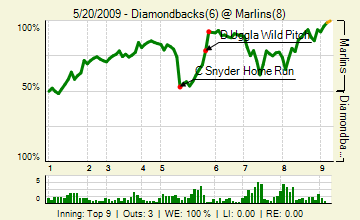 608 comments in the first-half, with 'Skins and kishi cracking three figures ['Skins is also dominating the night-cap, so looks to be going for all eighteen innings today!]. Also present: unnamedDBacksfan, sayheyupton, SeanMillerSavior, hotclaws, paqs, TwinnerA, 4 Corners Fan, ASUJon, parrotheadkrm, Zephon, emilylovesthedbacks, Sprankton, luckycc, snakecharmer and venomfan, in a thread of somewhat mixed emotions. The night-cap is, at least, still going on, with Arizona just having tied it up at seven in the seventh. It's approaching 11:30pm in Florida, and Azreous will bring you the recap in due course.