Diamondbacks 5, Marlins 3: The bliss of ignorance

Share All sharing options for: Diamondbacks 5, Marlins 3: The bliss of ignorance

For reasons that will become clear, I want to start by saying that no cats were harmed in writing this recap. However, there is a certain Zen-like tranquility to be obtained from not knowing the result of the game. The last thing I heard, pretty much, was Hanley Ramirez's sixth inning solo home-run, which broke a scoreless tie to give the Marlins the lead. For I arrived at The Sets to find no Internet connection and the TV tuned to what looked like an NBA playoff game. I can't really blame them for that: watching the Diamondbacks play this season has been a chore more than a pleasure, even for - or especially for? - hardcore fans.

Up until the point where ignorance kicked in, the game had been pretty even, with the weather a merciful non-factor (the third time's the charm, it appears). The Marlins had done a good job of getting their leadoff men aboard: four times in the first five innings, to be exact. However, Jon Garland had done an equally good job of stopping them from going much further. The Diamondbacks, meanwhile, had been shut down effectively by John Johnson. While not scoring, they did at least have some early success working the counts, making him throw 57 pitches through three innings. However, they abandoned that approach thereafter, going down quicker than... Well, fill in the appropriate metaphor yourself. Bonus points for not involving Paris Hilton.

But from the Hanley homer on, "The rest, is silence," as Shakespeare once said, and I had absolutely no idea what happened in the game after the Marlins took the lead. Did we win? Did we lose?  There was a famous quantum mechanics thought experiment by Erwin Schrödinger, who projected a theory that involved a cat sealed in a box, with a 50/50 chance of a poison capsule being released inside it. He said that, until you opened the box and actually looked, the cat was both dead and alive. That lasted until you opened the box, when it collapsed into either Hello Kitty (probably demanding a cheezburger) or Goodbye Kitty. Similarly for this game: while I didn't know the result, it was neither victory nor defeat, and curiously calming as such. No point worrying about what was already over.

This lasted precisely until Mrs. SnakePit, refusing to participate in my blissful ignorance, looked up the result on her phone. So much for Zen, Schrodinger and their application to Diamondback fandom. Oh, well...

Arizona saved all their offensive energy for a five-run seventh inning, which saw the Diamondbacks come in two runs down, the Marlins having added another run on in the sixth after Ramirez's homer. It started with Mark Reynolds hitting his ninth homer of the season, and ended with a Justin Upton sacrifice fly. In between, we had just about everything imaginable: our team tied the game up on a hit by Felipe Lopez, but the key blow was Gerardo Parra singling to left-center. Thanks in part to an error by Florida's left-fielder on the play, that plated two runs, and also let Parra take second, which subsequently allowed him to score on the sac fly.

Jon Garland pitched six solid innings, with the only damage to his ERA being the homer - the other run being unearned thanks to one of two Arizona errors on the night, both by Eric Byrnes in left-field. Though he did also steal a base, and the Marlins were no better, committing three errors which led to a pair of unearned runs scoring for the Diamondbacks in the fifth. Garland scattered seven hits and one walk, but picked up his team-leading fourth win of the season. Juan Gutierrez did let the Marlins get one closer in the seventh, but the twin late-inning fangs of the Diamondbacks locked things down for us, Tony Pena and Chad Qualls pitching scoreless innings in the eighth and ninth, extending our winning streak to a whole four days. That sounds much better than "two games", let's be honest.

On offense, Parra proved once again the star of the game, getting two hits and a walk - he's now hitting .412 since his promotion from Double-A, and the main question so far is, why the hell did we wait so long? It won't last - of that, there's little doubt - but let's enjoy and take advantage of it for as long as it may continue. It's more than slightly reminiscent of Mark Reynolds' promotion from Double-A in 2007, when like Parra, he came up in May and batted .426. Byrnes also managed a hit and a walk, and Justin Upton was the only starting position player not to reach base safely, one way or another. He also struck out twice, and unlike yesterday's pair, these ones will be part of his permanent record.

Admit it: who was pleasantly surprised by this? Who thought this was over after the Marlins went 2-0 up? Instead, we win again, and I note the following section in Nick Piecoro's recap, presented without further comment: "It seems as though the Diamondbacks have begun to loosen up since the May 7 firing of manager Bob Melvin. Unlike in the days immediately following Melvin's departure, this road trip has seen fewer mental mistakes, no blatant examples of complacency and games that generally have been crisp." 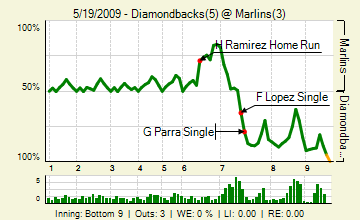 A relatively low-key thread: 332 comments, with almost 30% provided by 'Skins - kishi pipped TwinnerA [hope your mom's okay!] for runner-up. Also present in this unexpected groovy treat: sayheyupton, Pyromnc, unnamedDBacksfan, ASUJon, Jim parrotheadkrm, snakecharmer, hotclaws, Xeifrank, luckycc, Wimb, 4 Corners Fan, Snake Bitten, soco, jazzbo13, venomfan, TheDBackFan, Scrbl, and mrssoco. Tomorrow is the double-header caused by Monday's postponement: just a shame I'll be stuck at work almost the entire time. Action starts at  2:10pm Arizona time, with the night-cap following at 5:40pm [note corrections!]: I'm on the afternoon recap, with Azreous taking over in the evening. So there should be something happening here almost the entire day, one way or another. It'd be really nice if we could take both ends.

Piecoro also has some interesting nuggets about pitching. Doug Davis will start the first game tomorrow, with Bryan Augenstein taking part two - that makes sense, since we'll probably see Davis going deeper which will make it easier to manage the bullpen. Speaking of which, one presumes providing some additional depth is also why Josh Whitesell was optioned back to Reno, with Doug Slaten brought up, to give us eight relievers for tomorrow [and perhaps the next couple of days]. I suspect it is only temporary, and I would be surprised to see us pick Whitesell up again on our way to Oakland.

Looking further down the line, Max Scherzer will go for Arizona on Thursday and at the moment, it looks likely that Billy Buckner will be the starter on Friday, with Dan Haren going Saturday on normal rest. Again, that's probably wise, as there's not much point in rushing him back. The opponent for him in Oakland looks likely to be a familar one to Arizona fans - none other than Edgar Gonzalez, dumped by us. Hopefully, he'll be as helpful to our cause as another ex-Diamondback, Emilio Bonifacio, was this evening.