Share All sharing options for: Film Review: Kill the Umpire 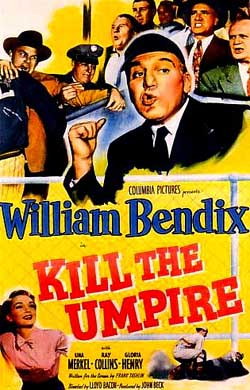 Made in 1950, this comedy tells the story of obsessive baseball fan Bill Johnson (Bendix), whose passion for the game causes him to lose multiple jobs. With his wife threatening to walk out on him, his father-in-law gets him a spot in umpiring school - a prospect that appalls Johnson, whose favorite heckle from the stands is the film's title, and who regards umpires as marginally above pond-scum.

He goes to the school with every intention of getting himself thrown out, but a chance encounter and a game of sandlot baseball makes him realize the crucial point umpires play and he completes the course. However, in the white-heat of a crucial playoff game in Texas, his resolve to "call it as he sees it," is sorely-tested when he rejects the advances of some gamblers, and his decision on a play at the plate goes against the home team.

In many ways, it's a time-capsule from a different era, when there were basically no teams outside the NE and North mid-West corners of the United States. There's no major-league baseball in Florida, of course, except for some 'exhibition games', and none in Texas either - indeed, I sense, given the generic team names e.g. "New York vs. St. Louis" that this had no MLB sanction. It was a time when people wore hats - not caps - to the game. and the mob that threatens to lynch Johnson at the end is the most impeccably-dressed, whilte-collar mob I've ever seen, wearing, to a man, suits, collars and ties. Similarly, the massive inflatable chest-protectors worn by the men in blue seem equally archaic. Perhaps most strikingly to modern eyes, the only ethnic face to be seen anywhere is a groundskeeper, for this came out only three years after Jackie Robinson broke the modern color barrier.

Given that, the film's somewhat preachy tone about the 'honest' nature of baseball seems a little hard to swallow. But its heart is in the right place, even if the turnaround that ends the film is somewhat implausible, to say the least. While mostly light comedy of the most inoffensive and obvious kind (oh, look - an umpire with bad eyes), it keeps moving, and the image of rows of wannabes practicing their signals in unison - "Yer out.... Safe! Yer out... Safe!' - certainly made us laugh. Bendix. who played the title role in The Babe Ruth Story two years previously, has an irascible charm that's quite appealing. Any hardcore fan will see fragments of themselves in his character. [The most recognizable face in the film, however, is likely Frawley, who plays the head of the umpire school - he was neighbor Fred Mertz in I Love Lucy]

Director Bacon is no stranger to the sports genre, having helmed Knute Rockne, All-American, starring Ronald Reagan ("Win one for the Gipper"), and it makes sense that scriptwriter Frank Tashlin was a former Warner Bros animator  That's especially apparent in the crazy, if well-staged, chase sequence at the end, as Johnson tried to elude his pursuers and make it to the stadium [much of the ballpark footage was shot at Wrigley Field - no, not that one, the one in LA]. In the end, this is entirely disposable but acceptable entertainment, harkening back to an earlier era when "Hey, blue! You stink!" would be the harshest criticism directed against an umpire. Rather than, say, 30,000 people chanting "Bullsh_t!" in unison, as at Miller Park last night... 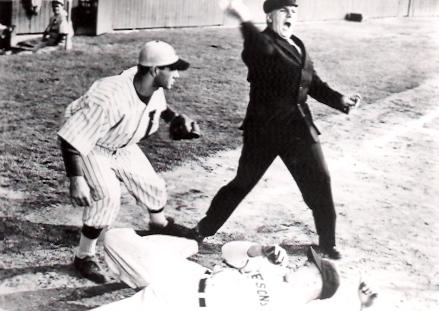