Diamondbacks 5, Brewers 2: It's better to be lucky than good

Share All sharing options for: Diamondbacks 5, Brewers 2: It's better to be lucky than good

The truth of the old adage, source unknown, was never more apparent than in an eighth inning where a mix of good plate discipline, good hitting, good management and very good fortune ended up turning into four runs, and the Diamondbacks held on for a rare win in Milwaukee. It had looked more likely that the headline would be, oh, 'Seventh-Inning Retch,' as for the second time on consecutive night, the team took a 1-0 lead into the bottom of the seventh, only to see it mysteriously replaced with a Brewers lead by the end of the frame.

We'll get to that in a moment, but with two out and nobody on for Arizona in the eighth, you could hear Angus Young clearing his throat in preparing for a rousing rendition of Hell's Bells (win percentage = 16.3%). Conor Jackson, however, had other ideas, working a walk (19.4%), and on a 2-2 count, Bob Melvin put him in motion on a hit-and-run. All-time single-season K leader Mark Reynolds did the needful on a pitch out of the zone, to put runners on the corners (25.8%). Then Justin Upton topped one: it crawled its way along the edge of the grass towards third-base, completely unplayable, and Jackson trotted home (48.2%). Tony Clark pinch-hit for Chris Young, and sent a ball down the left-field line to land fractionally foul. However, the umpire blew the call, saying it was fair, and a two-run double (85.1%) gave us the lead. Chris Snyder's RBI single, was frankly just piling on (92.0%).

Jon Garland thus escaped both the loss for which he was on the hook, and the win he richly deserved. Like Max Scherzer last night, Garland was impeccable through six, extending the scoreless streak by our starters to nineteen consecutive innings. The sixth was perhaps his most impressive piece of work. An error by Reynolds and another ball Reynolds stopped but let get away put men on first and second with no outs, but Garland merely struck out Ryan Braun, Prince Fielder and Mike Cameron to preserve the one-run lead. From what I can see, it's the first time he has had three K's in one frame since the second on September 20, 2007, a run of 271.1 innings.

A double, single and ground-out in the seventh ended Garland's night, but two runs in 6.1 innings on seven hits and no walks, with five strikeouts is very respectable. His ERA is now down below five, undoing more of the damage done by the one bad start. Tony Peña came in and allowed a hit to the first batter he faced, which scored the go-ahead run despite a close play at the plate. However, he took down the next two in the seventh and pitched a perfect eighth, going through the heart of the order - Braun, Fielder and Cameron again - to pick up a deserved win. Chad Qualls allowed a single, then rolled up a double-play and got a strikeout to end it. Expanding a stat used by Daron Sutton, here's Qualls' line since Aug 6th last year:
Qualls: 33.2 IP, 22 H, 3 BB, 36 K, 4 ER, ERA 1.07
He has been scored on in just two of those 33 appearances.

Offense? Another case of Arizona failing to do anything of note against a pitcher upon whom everyone else seems to have feasted. Manny Parra allowed three hits in six innings, and struck out eight - that's twice as many as in any other start he has made this year. [As an aside, nice to see the much-loved Craig Counsell have a three-hit night for Milwaukee; another former D-backs, Jorge Julio, pitched the ninth for the Brewers] Until the spectacularly awesome eighth, all we had to show on the scoreboard was a bases-loaded walk by Justin Upton in the sixth. That came about following a one-out single by Felipe Lopez and a double by Eric Byrnes that was almost a home-run, and should have scored Lopez, except he seemed under the impression it wasn't coming back.

After Jackson struck out swinging, Reynolds walked and then Upton repeated the exercise. However, Chris Young then flew out, extending his miserable streak - since his batting average was .257 on April 15th, he's gone 7-for-49 with 17 strikeouts, and is now hitting .190, with an OBP wobbling around .250. Might be him who needs to spend some time down in Triple-A. Lopez had his usual two singles - he has 12 multi-hit games in 22 starts. Felipe was in the NL top ten for April hits [O-Dawg led the league], and has started May in much the same way. Reynolds got a single and two walks, Jackson a pair of walks, and Upton a hit and a walk. 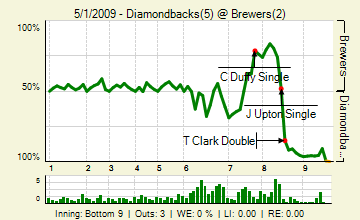 The Gameday Overflow Thread clearly brought the team good mojo, so props to Dbackskins - or his robotic clone - for starting it. IHateSouthBend was a worthy runner-up, on eighty posts, with no-one else getting past fifty. Also present were kishi, 4 Corners Fan, Wimb, snakecharmer, luckycc, TwinnerA, unnamedDBacksfan, hotclaws, soco, Sprankton, ol Pete, emilylovesthedbacks, AJforAZ, acidtongue, Scrbl, Bcawz, mrssoco, TheMainMan, Azreous and paqs. I am pleased to announce that Sprankton is the editorial selection for our first guest recapper on Sunday, his eloquent use of the English language just pipping venomfan's exquisite use of irony. Thanks to all those who applied, and we will be doing this every first Sunday throughout the season, so should have enough slots to go around.