Sugar is not the typical sports movie.  Yes, it uses baseball as its framing device.  Yes, certain devices such as the rags-to-riches backstory and carefully cut training or travelling montages make an appearance.  Miguel Santos' journey, however, does not follow the predetermined path and instead provides a glimpse of a world the average sports fan probably doesn't think about, nor do they often want to think about it. 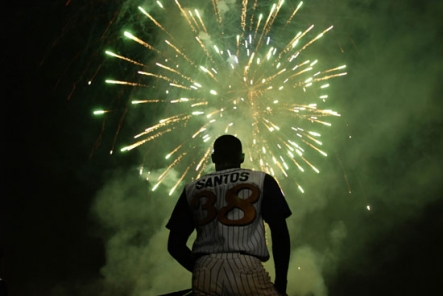 Santos, known as Sugar for a variety of reasons, is a pitcher in the Dominican Republic who is invited to Spring Training after developing a wicked curve.  He, like many others at the academy he is plucked from, is the hope of his family, the one that will lift them out of the abject poverty they endure on a daily basis.  Santos' education is baseball; although he has a little bit of high school, from early age he has known that he might have the talent to go all the way.  And so it is at the Dominican academy and later the minor leagues that he attempts to learn as much as possible about his desired trade.

His backstory is not necessarily remarkable within the film medium; it is the standard hero's background, in line with the American ideal of working up from the gutter to the top of the world.  It is first at the academy, however, and later in Iowa where he plays that the viewer begins to see the baseball world not as we often wish it were but how it is.  Players come and go.  They fight for positions, help each other but grow jealous when others are favored and promoted.  Some of the characters introduced don't make it, are sent away, perhaps back to the Dominican Republic to sell cellphone chargers or perhaps running off to some corner of America to make a better living doing manual labor.

It is the minor league journey that the baseball fan, especially those of us in major league cities, don't often consider.  As fans, we reduce players down to very limited labels.  Good.  Bad.  Can't bunt.  Great slider.  It isn't convenient to think of players as people, instead they become commodities.  We rarely weep for the player that never makes it to the Bigs, or that flames out after a season or two, or is cut from a team with no place else to go.  We don't think of lonely journey along dusty small city roads.  The truth is that there is always someone else waiting in the wings, and so unless a player is truly great or terrible, he is often quickly forgotten after beling replaced.  Sugar offers a glimpse into this world we might rather forget.

Sugar is a film of subtlety.  There aren't moments of epic emotions, like Remember the Titans or Brian's Song or even Field of Dreams.  Instead, the frustrations and loneliness the Dominican and other foreign born players feel is shown in small scenes that don't always resolve immediately, instead of overlapping and spilling over.  For instance, when a group of Dominican players, Santos included, arrive in Arizona for Spring Training, they go to a diner with a friend who had been called up the year before.  He orders French toast, and since they don't know English they also order the French toast.  Santos is shown at different times in this part of the film ordering the French toast because he doesn't have the courage to attempt to ask the waitress for something different.  Finally, he asks for eggs, but can't answer her question of how to cook them.  Dejected, he orders the French toast again.

Another one of Sugar's strengths is that it is a highly visual film.  There are large gaps with no dialogue, where instead we are allowed to simply watch and interpret.  The viewer begins to understand Santos' experience as an observer and silent participant.

There does come a point somewhere in the third act that the film seems to lose focus.  If you do get a chance to see this movie, however, I implore that you keep going until the end, as it is tied together brilliantly.

Of course, I could probably list off a hundred things in the film that show the cultural shock of attempting to play in the US for foreign players, or the interesting observation it might make on how sports fandom clashes with the human side of sports.  I assume, however, that some of you might actually want to see it, so I'll resist the urge.  Unfortunately it is playing virtually nowhere (I saw it at the Camelview 5 in Scottsdale), so you may have to wait to rent it.