Finally. That's probably the word that best sums up tonight's victory, the offense and pitching finally aligning to give Max Scherzer his first win in the major-leagues. After fourteen starts, 93.2 innings and 99 strikeouts, he finally gets to see the letter "W" by his name. It also marks the first time the Diamondbacks have won by such a wide margin since September 8. Oh, by the way - that's September 2006: 382 regular-season games ago.

Truth be told, it was not quite as easy as the final score might suggest. Arizona was only ahead by three runs after six innings: it took a late surge, capped by Chris Snyder's grand-slam, part of a six-run ninth inning, to reach the final margin. The team was also helped by nine walks from the Atlanta pitchers, including four in one inning, which put Mark Reynolds on, and then moved him all the way around the bases to score. But you can't ignore seven extra-base hits: as well as Snyder's homer, we got triples from Justin Upton and Gerardo Parra, and four doubles.

Parra was perhaps the offensive star of the game - at least up until Snyder's second long-ball of the season. He swatted three hits and drove in three runs, making him 5-for-13 with five RBI in three games since being called up from Double-A. At this rate, it might be quite some time before Chris Young (who popped out on the infield as a pinch-hitter) sees another start. Felipe Lopez also had two hits, Reynolds a hit and two walks, Upton two hits and a walk, Eric Byrnes two hits, Snyder two walks in addition to his salami and even the hitless Chad Tracy got a couple of free passes.

It was a very welcome change from the recent failings on offense. To put it into some kind of perspective, we scored more runs in one inning, that six-run ninth, than we had done in fourteen of the past fifteen games - and also in all but two of Max's thirteen career starts. This level of run support for Scherzer was well overdue, and you could also see AJ Hinch in the dugout, looking satisfied, probably for the first time since taking over the position. The potential in this team was very readily apparent today, and I hope to see a good deal more of it going forward. [Random note, mentioned in the GDT comments, but worth repeating: when Bobby Cox took charge in 1978 for his first game as the Braves manager, AJ Hinch was three...]

Max Scherzer wasn't as dominating as he has been - only four strikeouts in six innings - but when you pitch shutout baseball, you're not going to lose very many games. He was helped by some impetuous, shall we say, base-running early on the Braves. After they put men on the corners with one out, the old "fake to third, throw to first" move actually worked - and not only got the runner picked off first, but also managed to nail the runner on third, who seemed to have dozed off as things unfolded on the other side of the diamond. He also got Atlanta to hit into two double-plays, which helped keep his pitch-count manageable: he ended the night at 97 pitches, having allowed four hits and three walks. He did get a visit from the medical staff in the sixth, for a leg issue, but seemed to shrug it off: hopefully, it is as trivial as it seemed.

The bullpen did what it had too, throwing three scoreless innings, though not without a hiccup in the seventh. Scott Schoeneweis came in allowed a couple of hits, and Hinch ended up having to go to Gutierrez for the third out. Having thrown only two pitches, the aim was to send him out there in the eighth, but the Braves' wildness brought his spot up with the bases loaded and the game not quite out of reach at 5-0. So Hinch went to Montero, who walked in a run: Esmerling Vazquez pitched a scoreless eighth and, even though it wasn't quite a save situation (by the odd nine runs or so), went with Chad Qualls in the ninth. He took nine pitches to retire Atlanta in order, and it was probably wise to get him in, since Qualls hadn't seen the mound since last Sunday.

All told, it's the kind of emphatic victory that has been few and far between this season. The only comparable one is probably the 10-0 victory over the Cubs, and any positive impact from that didn't seem to last long, as we didn't score more than five runs again for almost two weeks thereafter. Still, after a week of almost unrestrained depression, this was a very welcome change, and I hope we see more Fangraphs mimicking the shape below on the rest of the road-trip. 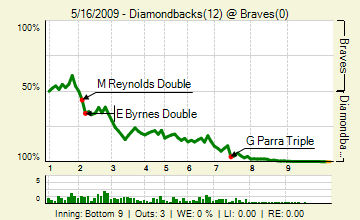 Looks like Doug Davis has patched things up with AJ Hinch, after yesterday's spat, both players saying it was simply confusion over whether the pitcher would be hitting for himself or not. Said Davis, "He had told me that I was going to be up there no matter what. He meant up on deck. I thought he meant at bat. That was it. That was the whole discussion. It's buried and done with." DD was rather less-conciliatory towards commentator Matt Williams, however, and had a curious comment when asked if he's spoken to Williams: "I don't need to talk to him about it. Just another front-office executive decision." I have to say, I suspect I will not be surprised if Davis fails to reach free-agency as a Diamondback.

Ok, I'm gonna get the Gameday Thread written now, since I doubt I'll be up at the ungodly hour required to post anything tomorrow. For the first time in quite some time, I will sleep well, and unconcerned by the Diamondbacks. May this be the start of things to come.