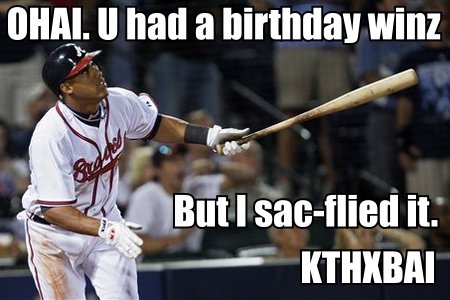 Champagne dreams, caviar wishes
Watch them go from rags to riches
Money to burn, money to give away
Lifestyles of the rich and famous
Look at them, who can blame us
Lessons in the subject of decay
Come tomorrow, the dream might blow away
Guilt and sorrow, the price you have to pay...
-- Snobbery and Decay, Act

My iPod randomly cranked out the above song as I started the recap, and its lyrics seemed to offer an appropriate comment on the latest loss for Arizona. Not even it being AJ Hinch's birthday cous save us:  our manager turned 35 today, but the baseball gods chose not to grant him a win. Instead, all that could be found at the bottom of his gift bag was an orange past its sell-by date, in the form of a ninth-inning sacrifice fly by Atlanta. That answered Stephen Drew's homer in the top half, and gave the Braves the win back. Oh, and he was also favored with a grumpy starting pitcher, Doug Davis being none too happy to be removed from the game after only eighty pitches for a pinch-hitter - and not too bothered who knew it either. The two went down the dugout tunnel for a quiet discussion on the matter.

To some extent, Davis has himself to blame, after some bad fundamental baseball in the bottom of the second inning allowed the Braves to tie the game. Davis had allowed the first two men to reach, but then got a chopper back to his right. He got the ball and was going to throw to third for the force - except, Mark Reynolds had also gone for the ball, so there was no-one to whom to throw it. He turned and hurled a flustered throw wide of first-base: so instead of second and third with one out, there was a run in, Braves on the corners and still nobody out. The man on third duly rolled home on a fielder's choice and the lead evaporated.

The only other damage Davis allowed was a solo home-run to Chipper Jone in the third, but that gave the Braves the lead and meant that come the seventh inning, when DD's spot came up, scoring a run was more important than sending Doug out there for the seventh. Of course, it probably didn't help Davis's demeanor that pinch-hitter Ryan Roberts promptly stared at strike three [easy to imagine sardonic applause from the dugout there], or that our starter was probably feeling a bit hitterish, having singled in the second. His batting average for the year is now .214, above that of Chris Young, Chris Snyder and Josh Whitesell in today's lineup.

At least he did escape the loss, leaving our starters' record when they throw a quality start at 8-7 with four no decisions. Just to put that into context, in the NL this year overall, pitchers get the L one quality start in six [44 in 264]. Arizona starters have lost more than twice that [37%, seven in 19]. It took a solo home-run by Drew, leading off the ninth, to stop it from being eight, and Doug Davis's record going to 2-6, despite a 3.22 ERA. Drew's second HR of the season leveled the score at three, and briefly gave the Diamondbacks hope. That was something we basically hadn't seen since Felipe Lopez led off the game with a single, Gerardo Parra followed with a triple down the right-field line, and came home on a Justin Upton groundout to give the Diamondbacks a 2-0 lead.

But after we'd tied things up, Tony Peña was sent out there for a second inning, and allowed two hits and a walk to load the bases with one out. A fly-ball to center proved just deep enough to get the man home, and the losing streak hit four. The decision to send Peña out there for a second frame seemed questionable from the moment it was made: he hasn't completed two frames this year, and the last time he did, he...yes, allowed a run and took the loss. [That was September 13 against the Reds, with the go-ahead run driven in by a pinch-hitting Micah Owings] You have to go back a total of 67 appearances for Tony's two-inning game before that. He ended up throwing 27 pitches tonight, which was also a season-high.

Drew had a pair of hits, while Parra added a walk to his hit, though was also caught stealing - in the first, he's batting 1.000 with a slugging percentage of 3.500, and .000/.000 thereafter. Mark Reynolds was 0-for-4 with three strikeouts, and Young went ohfor as well. With half of May in the books, he is batting .143 for the month (6-for-42) with one walk, and is making his feeble April seem like a monstrous display of hitting. If we had any even half-credible options, he'd be acquainting himself with life in Reno. Overall, we had only two walks compared to twelve strikeouts. In the past dozen games, the Diamondbacks have scored three runs or less on nine occasions - which would go a very long way to explaining why we have a record of 2-10 over that time. 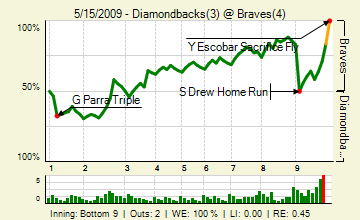 I count myself fairly glad to have missed most of this one, through work or coming home from it. Almost 400 comments in the thread, which is about as many as could be expected, given the way we've played of late. Bit of a British invasion, with Wimb and hotclaws battling it out atop the list, Wimb finally prevailing 96-83: no-one else got past fifty. Also present: sayheyupton, ASUJon, jonny-yuma, NewJackCity, Azreous, kishi, DisplacedAZfan, 4 Corners Fan, snakecharmer, Fiona, Scrbl, soco, jazzbo13, SeanMillerSavior, dbacks4life, dahlian, Quin, emilylovesthedbacks and TwinnerA.

Elsewhere, a couple of bits of news. Utility infielder and occasional pitcher, Josh Wilson, was plucked off waivers by the San Diego Padres, where he will join another, much less-lamented Diamondbacks discard in Chris Burke. We'll miss Wilson's arm more than anything else, I suspect. And to quote the official press release, "The Office of the Commissioner of Baseball announced today that Arizona Diamondbacks Minor League infielder Agustin Murillo has received a 50-game suspension after testing positive for Clenbuterol, a performance-enhancing substance, in violation of the Minor League Drug Prevention and Treatment Program." At age 27, he's probably done as far as making the big-leagues is concerned, and between the loss of him and Wilson, there isn't much left in the Reno infield.

Back tomorrow, as Max Scherzer goes for his first career victory in his eleven millionth start. Or perhaps it just seems that way...