The Mobile Baybears took on the Cincinnati Reds tonight in what ended up looking like some kind of exhibition match. Well, it was really just two call-ups from AA taking center stage tonight, with mixed results. The Diamondbacks continued to look like some kind of joke, though, so let's just go with the exhibition angle and pretend they didn't just get swept at home.

For about 20 minutes, things seemed to be going swimmingly. That was about how long the first inning took. Bryan Augenstein came out throwing strikes and not showing any fear of a pretty solid Reds lineup. He struck out Taveras on three beautiful pitches, got Hairston to ground out feebly to Drew, and punched out Bruce to complete a very efficient top of the first. In the bottom half, Gerardo Parra -- fresh off the bus and into the two hole in the lineup -- smacked a home run into the right-field seats in his very first big-league at-bat (the 100th player in big league history to do so). Suddenly it was 1-0 Arizona thanks solely to the youngsters making their first stop in the bigs, and the world was beautiful.

Unfortunately, like most things with the Diamondbacks these days, that was short-lived. After leaving two stranded in the second, Augenstein seemed to come unraveled a bit when Cueto led off the third by bunting to get a base hit. Taveras followed with a hit of his own. Augenstein got Hairston to ground out, which moved the runners over, then induced Bruce into hitting a fly ball that wasn't deep enough to score the Reds pitcher. But just when it seemed like Bryan might escape unharmed, evil incarnate Brandon Phillips ripped a double to right, plating both runners, and Hernandez followed with a single that drove in Phillips. Just like that, it was 3-1 Reds.

But this offense had been resillient under AJ Hinch's short reign, right? Sure, they're terrible with runners in scoring position, but two runs wasn't too much to ask for a comeback. Unfortunately, it took a while to get there. The D-backs went down in order in the second, third and fourth, and only a Tracy walk saved them from doing the same in the fifth. It looked like business as usual in the sixth when Lopez and Parra grounded out to get things started, but Upton continued his torrid hitting the past month with a double, and Stephen Drew, making his first start since April 24, drove him in (gasp!) to make it a 3-2 ballgame. Not too shabby. It should be noted that as Upton sped around third to come home, Cueto tried to put some kind of fake tag on him, and he was seen in the dugout holding his leg a little. He appeared to be fine, but it was still a needless tactic.

Augenstein entered the seventh sitting on 80 pitches. Still reasonable to trot him back out there, but the wheels -- and the gear shaft, engine, transmission, two passengers and one of the side mirrors -- fell off completely for the entire team in what could be seen as a microcosm of our season thus far. I hate relying on the whole "post an entire half-inning" gimmick, but the play-by-play does this a whole lot more justice than I ever could:

That's right. It took getting a pitcher out twice to end that hellish inning. The other out was the strikeout of Phillips that we couldn't even properly enjoy, because Montero sailed the throw into center field. And Vasquez had to be brought in to face Cueto the second time because Gutierrez couldn't get anything done right. That took a closely contested 3-2 game and turned it into an 8-2 debacle. Augenstein got charged with a couple of the runs, making his line look less respectable than it really was. Five runs, five hits, an error...the whole poison buffet was there.

This game was so ridiculous that Augie Ojeda became a leading source of offense. In the bottom half of that disastrous inning, Ojeda launched his second home run as a Diamondback, making the margin a little less awful. Of course, Brandon Phillips, that Ragtime Roastbeefy, hit a two-run double in the top of the eighth to skew the gap even further, and that ended up being the final margin. I'd go into more detail here, but after the seventh, the details were largely irrelevant. 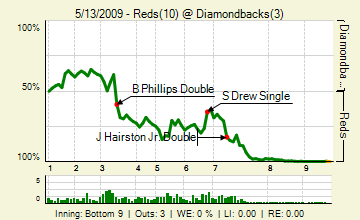 Master of his Domain: Stephen Drew, +7.1%
God-Emperor of Suck: Bryan Augenstein, -21.5%
Dishonorable Mention: Juan Gutierrez, -12.3%
Not Deserving of Mention: Just about every other Diamondback

Not a whole lot to be excited about on the Diamondbacks' front; beyond Ojeda and Parra's home runs, Justin Upton had two extra-base hits and a walk. Drew had his RBI hit, and Montero and Tracy reached on walks. That's it. The defense had two errors (and a runner advanced on another terrible play by Montero). The only pitcher to escape without damage was Rosales in the ninth.

For the Reds, Taveras had three hits, and Hairston, Phillips, Dickerson and Hanigan each had a pair. Cincinnati reached base 20 times, with 14 hits, four walks and two plunkings -- Augenstein hit Rosales in the second on a pitch that seemed in no way intentional, and Vasquez pegged Bruce in the eighth on what was probably a real purpose pitch. Considerable argument about what "purpose" that actually served reigned supreme in the GameDay Thread.

It'd be nice to say that this was something that could be shaken off, an anomaly in a recent string of acceptable play. Instead, the AJ Hinch era has moved to 1-5, and the basic fundamentals are still nowhere to be found. We might be wishing this were 2004 at some point, which is a horrifying prospect. The Diamondbacks are now 9-15 at home, the worst record in the majors.

Day off tomorrow. No one has earned it, but by god, at least we can't lose again. Better enjoy it while it lasts, because there won't be another off day for like three weeks.